I’ve already written about the playtests for this game. But the convention was the place where the rubber hit the road.  Just a quick recap for those new to the topic.  The game is based on the Italo-German air campaign to sink the British carrier group raising hell in the Mediterranean in early 1941.  Presented as a problem to solve for the Italian and Germans, the five players had to decide on their force composition and where they would enter the board. The British defenders, three players each with two Fairey Fulmars had to choose where they would defend and manage their nasty assortment of flak.

Dave Schueler and I ran the Illustrious game on Saturday night, our fourth game of the convention.  We were hoping for a relatively trouble-free game, because we were kind of all in after the Falklands.

Relative positions of Illustrious and Zulu on the board. The ships don’t move during the game. The heavy flak markers could be placed up to 24″ from the destroyer (one marker) and the aircraft carrier (two markers.)

Doug H., Gil F., Andrew M., Shawn M., and Tom B., formed the Axis air commanders.  They decided on a force of nine SM 79 torpedo bombers, three Ju. 87 dive bombers and two MC 200 fighters as escorts. Each also had the opportunity to improve their pilots or take two re-rolls in the game.  It was an interesting mix.

Chuck H., Michael K, and Charlie B., took the Fulmars.  After the Axis declared their intentions and placed their planes, the British placed their Fulmars in a position to immediately challenge the bombers.  The Axis bombers had a lot of ground to cover to get to the carrier and the field was wide open for the British players to make their lives miserable.

But things got tough for the British players early.  Though one of the Macchi fighters went down to flak early, the anti-aircraft fire from the Illustrious and the HMS Zulu escort was pretty ineffective. Chuck H’s Fulmars ran into a hail of defensive fire from Doug H’s group of bombers.  One was shot down and the other lost its forward fire control, rendering it useless. Charlie’s Fulmars flew through the German bombers, and by the time he could get things turned around was pretty much out of the fight. 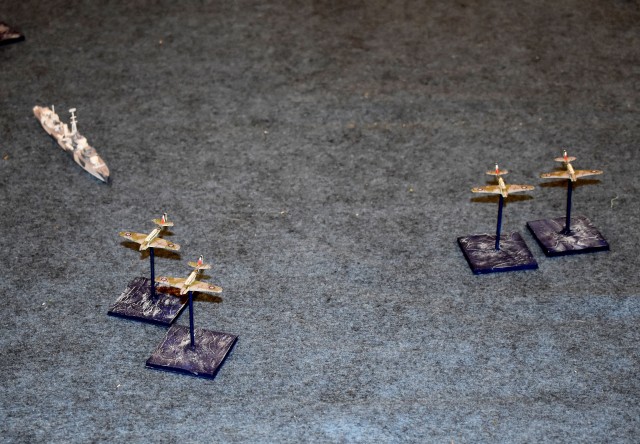 Only Michael’s Fulmars became a constant menace as he harried Gil’s SM 79’s.  Gil was the far arm of the anvil attack planned by the Italian pilots.  Michael was able to trail him most of the route to the target, shooting off all the ammunition in his under-armed planes, inflicting damage, but not quite enough to injure them fatally or force them to abort their mission.

Michael’s Fulmars trailed Gil’s bombers most of the way across the board, shooting with some effect, but unable to inflict catastrophic damage. Michael was, in turn, trailed by Shawn M’s MC 200.

Eventually Tom and Doug were able to combine their torpedo bombers with Andrew’s Stukas to make an attack from the north while Gil, with Michael’s Fulmars trailing dutifully behind approached from the south.

Gil struck first, but not before flak and Michael’s Fulmars did enough damage to force two of his Sparvieros to jettison their torpedoes.  However the final plane was able to launch and do 17 points of damage to the Illustrous.  It was a moment to celebrate.  Only eight more points were needed to win the game. 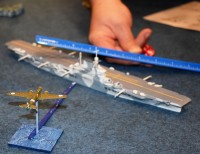 With nine planes still approaching from the north against virtually no opposition, it seemed like a done deal.  Unfortunately it was not to be. Tom peeled off one of his bombers to attack the Zulu.  Torpedo away-a miss. As the bombers neared the carrier and the light flak kicked in, it seemed as if it couldn’t miss.  Tom’s remaining bombers were shredded by two pounders.  Flak took down one of Doug’s SM 79’s and one of Andrew’s Stukas flopped into the sea. 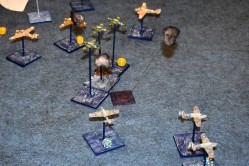 The remaining four planes all delivered their ordinance.  Doug’s two torpedoes hit on a nine or ten.  Both missed, despite a couple of re-rolls.  Andrew hit with one of his Stukas, but it wasn’t a clean hit.  A roll of four on the damage table brought total damage points inflicted to 20.  A 25 was needed for the win.

But it felt like everyone had a good time.  Both sides had a chance to win, and the Brits pulled it out at the last minute.  But if the Axis had just a little more luck.

The planes are all 1/300 from a variety of manufactures, mostly Raiden with some Heroics and Ross and Scotia thrown into the mix.  The ships were all 1/700, built by Dave.  Rules by David Manley, his unpublished Airwar 1940 rules.  Everybody enjoyed  this rule set, felt that it had sufficient period feel to go with ease and speed of play.  The game was over within two and a half hours.  We’d like to, again, thank David for letting us playtest his rules. Thanks too, to the players who seemed to have a good time.