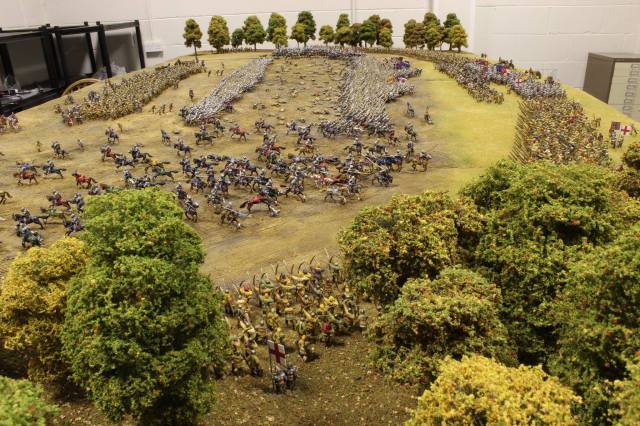 Alan and Michael Perry’s amazing diorama in the Royal Armoury to commemorate the 600th anniversary of Agincourt.

October 25th is the anniversary of Agincourt, fought in 1415, 601 years ago.  Agincourt is one of the best remembered of all British battles, one that recalls good King Hal with his tattered band of yeomen drowning a vastly superior French army in a sea of mud, while raining down a storm of arrows that left the French broken, dispirited and leaderless. That’s all hokum of course, according to the new research about the Hundred Years War and this most English of battles.

But this post isn’t to revisit Agincourt and our changing perceptions of the battle, it’s really about me. I don’t claim to know everything about the battle.  In fact, I’m regularly confronted with the fact that I know little.  But learning about Agincourt set me on a road I remain happy to follow: a healthy obsession with the Hundred Years War I play out in reading and miniature wargaming. 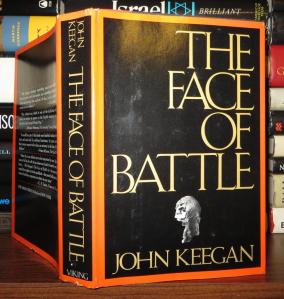 My battered 1976 copy of the Face of Battle. It wlll be the last book I ever part with.

No work influenced my connection to this period more than John Keegan’s 1976 book, the Face of Battle.  Intended to be a look inside battle, from the soldier’s perspective, Keegan devoted about 37 pages to breaking down the experience of archers, men-at arms, and horsemen at the battle.  Drawing from mostly secondary sources, Keegan’s observations were vivid.  Though measured against today’s writing, it may seem wholly incorrect, The Face of Battle drew me into the period and put Agincourt on my list of must do’s.

I read Keegan’s book in 1978, the summer I graduated from college.  It is about this time I also plunged fully into miniature wargaming. Surprisingly, or maybe not, I didn’t leap headlong into the HYW in miniatures.  My friends and I played Napoleonics in 15mm, WRG Ancients, again in 15mm. Later I did George Gush’s Renaissance rules, Lynn Bodin’s Imperialim, my first flirtation with 25mm figures. But no Agincourt.

In 1989 I saw Kenneth Branagh’s Henry V. And then I saw it again.  I bought it on VHS, I have it on DVD.  I can stream it on Netflix. It is not historically accurate, but the words mean so much to me. Whether it is Exeter reminding the Dauphin that young King Henry has matured and will “make your Paris Louvre” shake with gunstones, or the brilliance of the Crispian’s Day address, it still gives me chills. I’ve watched it at least a hundred times. Maybe I’ll watch it today, make it an even 101. If you’ve never watched Branagh at his finest, it’s here for you to view. If you don’t want to become one of his “band of brothers,” check to see if you have a heartbeat.

I began my Hundred Years War project at least 15 years ago.  I have more figures painted for it than any other, and far more unpainted miniatures than for any other period. I’ve hosted skirmish games and chevauchees.  I’ve run naval battles.  My goal is play Poitiers, rather than Agincourt, because the circumstances of the more famous battle are so difficult to recreate on the game table. While I have plenty of unpainted figures, I really want to take advantage of the new Perry plastics, which have the dual virtues of being beautiful AND cheap.

Though I’ve given up on Agincourt as a game, without my exposure to it, the passion that will always inspire me for the period would never have begun. What began with Keegan and Branaugh continues with Jonathan Sumption and Anne Curry, with the superb miniatures by the Perry brothers, and watching my friend Chris Craft roll his beautiful miniatures out on the table to play Verneuil, and of course, Agincourt itself. 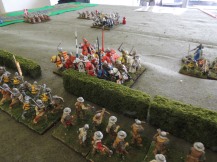 French mounted knights got as far as the hedge before being blasted by Gascon crossbowmen. 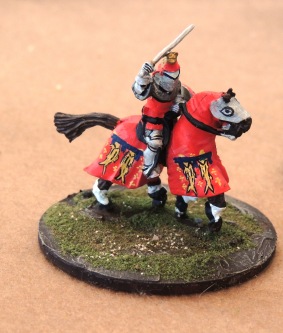 Marshal Clermont was killed in the opening cavalry charges. 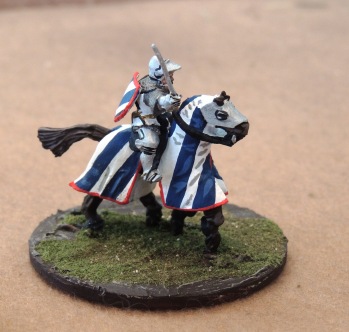 Arnoul d’Audrehem led one of the ill-fated columns of horse to open the Battle of Poitiers. 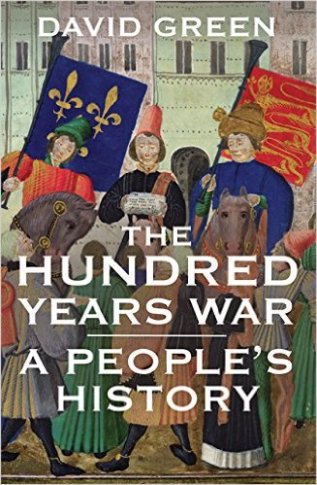 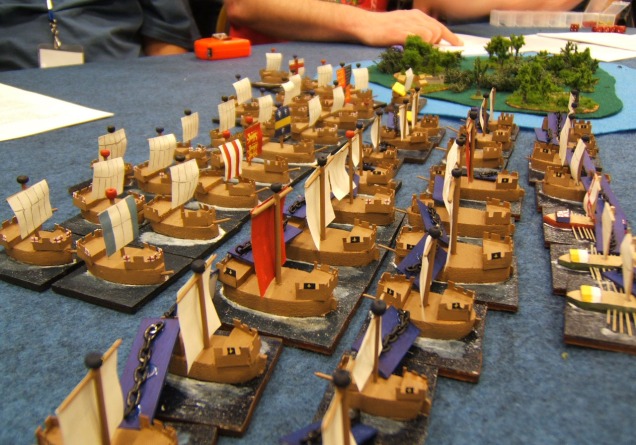 Like most wargamers, I am easily distracted.  My interests change with the moment-new rules, new miniatures, what my friends are doing–but my desire to continue with the project, paint what I have and more, find new ways to game the Hundred Years War, will never die.