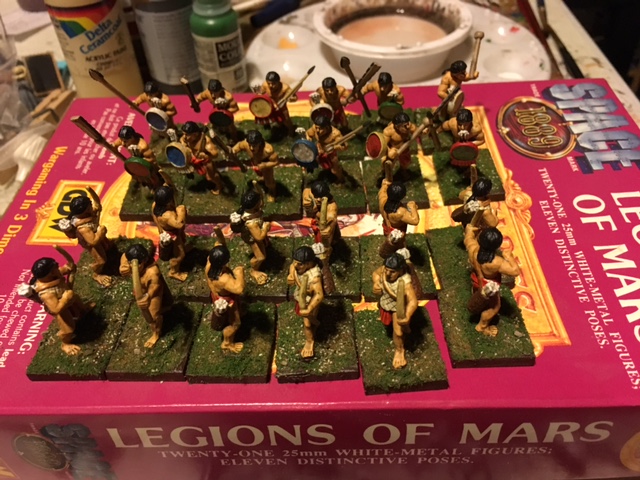 Twenty-four peasant Otomi warriors from my Tlaxcalan command, allied to the Spanish.  Not a lot to  them.  They are in their summer dress uniforms, and can’t afford interesting shield patterns that are above their station anyway.

I’ve painted like one possessed for this Quetzacoatl Rampant project.  I’ve avoided the trap of over-ordering, and I’ve managed to really persevere and stay focused on getting figures done.

But I don’t think I’ve ever done what I did this week.  I began, painted and based 36 Tlaxcallan warriors. Yes, 28’s.  That’s great because it wraps up all the units I currently own as the newspaper heads into its first deadline week-time to paint will be thin from Tuesday to Friday. I do have two more units of Aztecs coming, and they should arrive about the middle of the week, so I’ll have something to do when the paper is done.

Just a few caveats.  They are mostly without clothes.  They aren’t exactly the Grenadiers of the Old Guard.  They are peasants, so their shields are pretty plain. 12 of the them are archers.  No heraldry involved.

Even so, my painted total of figures for this project is currently is about 260.  That’s pretty good given that I didn’t start until just before Enfilade. I’ve also pinned down the final number needed to meet the 72 point force for each side.  Here is what is left to do:

All in all just about 100 figures.  In addition I’ll add some Aztec command figures and bearer figures for scenario making.

On my painting table

Though I expect this will be a pretty light painting week, I’ve assembled ten 1/285th scale planes by Raiden.  I’m fascinated by the Cuban Missile Crisis and keep thinking I’m going to have some sort of scenario breakthrough for some sort of hypothetical bombing or photo recon of sites in Cuba 1962. I’ve got the following lined up

2 X F8 or RF8 Crusaders–did actual photo recon over the IRBM sites in Cuba, one of my very favorite jet fighters

4 X F-100 Super Sabers–Front line USAF fighter of the time. Don’t have any F-105’s to go with them.  They will be in Air Force natural metal

4 X A-4 Skyhawks-early Skyhawks without the lump.  Somebody has to deliver the payload.

2 X F3H-Demons-all weather, all missile armed fighter.  Progenitor of the F4 which was replacing it at this time.

I have a couple more Crusaders and Demons on the way from I-94 Enterprises as well as some new decals. Won’t have these finished in time for the Museum of Flight on November 6th, but I do expect to have them for Enfilade.  Am bugging Dave Schueler for a good scenario.

Music to paint by 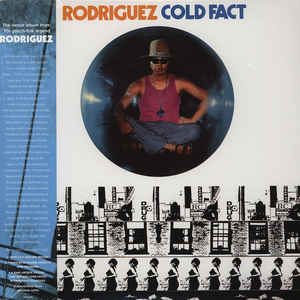 I’ve listened to so much good music lately, and I haven’t shared much of it. But one album I picked up used is Cold Fact by the artist Rodriguez for about twenty bucks. It is a re-pressing of a 1970 record released by the Detroit based singer songwriter that sold poorly and the album and performer sank into obscurity. But Rodriguez’s story became the subject of a 2012 documentary called Searching for Sugarman, and the album was reissued.

I decided to give the record a try, and was not disappointed. Think of early Jackson Browne, the good stuff, but probably not quite as consistent.  Critical of the establishment, observations of drug culture,  the best song is definitely “Sugarman” but the rest stand on their own. Worth a listen, but I found it a worthwhile add to my collection.