I took some time off from painting last week. The rush to finish The Buffalo hunt kind of wore me out.  I’ve managed to pick up a brush the last couple of days, though I’ve been torn about what to work on. I still have a couple of units on my painting table: William Washington’s 3rd Continental Dragoons, all six figures of them for Rebels and Patriots; and twelve figures of Old Glory Volunteers for the Philippines. I’m making progress and hope to finish them soon. 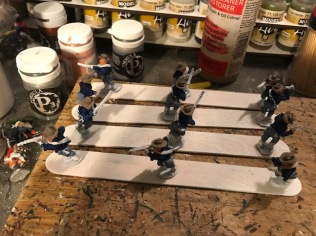 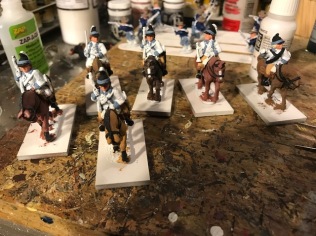 Volunteers by Old Glory and #rd Continental Light Dragoons are under way, but a ways from being completed.  Hoping for this weekend (Sept. 8th.)

But on the horizon are a couple more important game days.

In September David Sullivan and I will host a Rebels and Patriots game at Fix Bayonets in Steilacoom.  I think we probably have all the figures we need, so I just want to wrap up those dragoons.

In November there is the Museum of Flight game.  I’ve suggested to Dave Schueler that we run an air attack on a convoy.  I have bombers suitable for the purpose to raid Italians, Germans or British, and can likewise put up defenders and escorts for all the nationalities.  All I need is a convoy. And maybe some escorts.

I’ve started putting together some British escorts.  I have a box of the 1/700 scale British O Class Destroyers from Tamiya.  The kit was cheap, and it comes with two destroyers!!  I think I ordered directly from Japan. It was ten bucks plus reasonable shipping, and did I say it came with two models?

I started assembling the first ship last night.  As I was doing so I realized either how terrible my vision was or how poorly I can manipulate small pieces, or why I should just never be a modeler.  The kit is pretty straightforward and actually has very nice detail  There are a bunch of sub-assemblies to put together before putting attaching them to the hull.  Makes sense. But some of the parts are oh so small.  There are the individual 20mm guns that are very nice but pretty little. Getting them to fit into those tiny little holes is really a challenge.  I was able to pull it off only by using tweezers.

But the absolute death of me is the eeny-teeny searchlights.  Each ship has three.  One is very small, the other two are grain-of-sand sized.  I did everything I could do to try to align them properly in their very small spaces, arriving many times at some version of upside down, glued to the hull, or adhered to my fingers.  When two of them finally fell on the floor, invisible to my 64-year old eyes, I gave up and called it good.

This is the ship assembled.  No you won’t find any searchlights, but the rest of the pieces are there to the best of my ability.  Note the slight list to the main mast. The ship will be the G98 Orwell, because I just can’t help myself. Orwell was a 4-inch armed destroyer.  The second model will be the G 04 Onslaught, a 4.7 inch armed version. The model was spray primed with Humbrol light grey.  More painting to come.

I have no idea what I actually completed in August.  Not much from my historical projects.  I did complete the Buffalo project.  I think that was:

8 wolves by Foundry and Alternative Armies

16 buffalo by Acheson, Westwind and Foundry.

That’s 42 figures in about three weeks of painting time.  Not bad.  Not great.

August is also my little work gig for the Washington State Journalism Education Association, and I get a paycheck for that.  Lorri usually allows me to invest part of it in game goodies. So I did some buyin’

By far the biggest purchase was a big pile of Litko bases that should keep me pretty well stocked for the year.  Mostly bits for the Daniel Mersey rules.

I also bought some planes for up and coming projects.

Daveshoe, George Kettler and I really want to do some Vietnam era stuff.  Dave and I have most of the planes for the Navy, but I wanted some A-4C’s for the Air Force.  I decided this was a job for Raiden miniatures, so I ordered the Phantoms.  Of course I couldn’t help but pad things out a bit, so I also picked up six of the excellent Bristol Beauforts.  They were the prime torpedo bombers for RAAF, and participated in the air campaign against Rabaul, so that’s a future side project.

Dave and I also plan to run a game based on the American bombing of Ploesti.  I have some of Phil Bardsley’s beautiful B-24D’s, but needed six more, so I sent off an order to Scotia for more.  Well, actually I ordered ten B-24’s and I’ll figure out what to do with the rest.  Probably something to do with Rabaul.  Hey,  the RAAF flew those too.  I also slipped in some Beaufighters, which the Australians also flew against Rabaul.  Anyway, there are plenty of airplanes to keep me busy.