I’m a huge fan of David Manley’s games. He’s done tons of them.  My favorites are Action Stations for coastal combat in WWII, soon to be superseded by a slimmed down version newly published called Narrow Seas. I really like his two air games, Air War C. 21 for modern air combat and his hopefully his WW II version Air War 1940.  They are elegant, easy to learn, and easy to play which you can’t say about many air rules. Finally, and this is going to sound like a back-handed compliment, but it isn’t intended as such at all, I really like his naval rules for the American Civil War, Iron and Fire.  Based on my limited play, I feel like Manley is the only Brit who gets this conflict at sea and can put it into game terms.

Lots of other great Manley rules, but the most recent set to lure me into something new is his game for the Cod Wars. What, you may rightly ask, are the Cod Wars?  They were a series of three international incidents between Iceland and Great Britain that occurred between 1958 and 1975.  They grew out of an effort by Iceland to protect its cod resources, continually extending its exclusive fishing zone, while British fishing fleets continued to fish in ancestral fishing grounds in defiance of Icelandic law.

While no lives were lost, the presence of Icelandic coast guard vessels among the British fishermen, cutting nets and impounding trawlers, precipitated difficult relations between the two NATO allies.  During the third Cod War in 1975 following the extension of 200 mile fishing exclusion zone, the British fishermen were escorted by frigates from the British navy, featured more cut nets, and ramming that put both the coast guard ships and the frigates in dry dock for repair.  After each of the Cod Wars, Iceland’s right to protect its cod resource was affirmed by international law.

So, I know what you’re thinking: “Smyth, don’t be ridiculous.  Nobody makes miniatures for the Cod Wars.  Fishing trawlers my ass.”

Hah! Let me just respond that you are wrong, wrong wrong. Not only are they made, sort of, well made on demand by Shapeways, but you can get them in a variety of different scales.  They are available in 1/600, 1/1200, and 1/1800 scale.  It was my original intent to do them in the largest scale, but the game really requires several of the British frigates and in 1/600 they would be about 60 bucks, so I went with 1/200.

I ordered my first batch of vessels about ten days ago, and they arrived on Saturday.  They look really nice. They’ll need to be cleaned according to the Shapeways protocol, before priming and painting. The first batch include the British frigate Exmouth, the Iceland Coast Guard Vessel (ICGV) Baldur, and two support vessels to the fishing fleet, Star Aquarius and Star Polaris.  They are all about three inches long.

The first batch of stuff in clear plastic. From left to right, ICGV Baldur, HMS Exmouth, Star Aquarius, and Star Polaris. Exmouth is just short of three inches. They have a fair amount of detail for their size. I’m impressed.

The second group of ships I received are a collection of British fishing trawlers. There are three stern trawlers and three side trawlers.  They are all pretty generic. 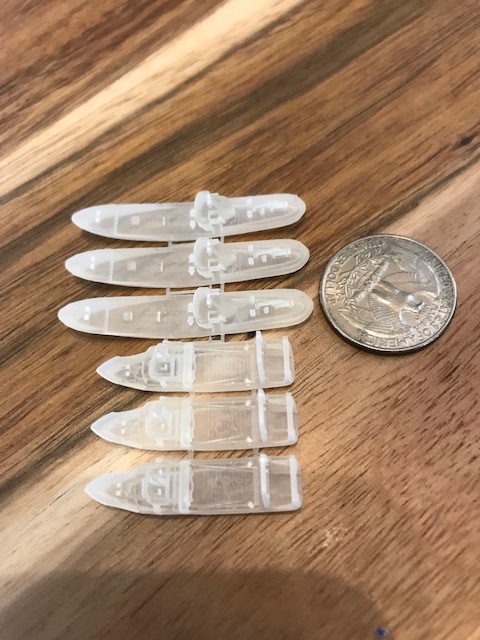 I’ll add more ships offered in sets by Decapod, as well as more of the Leander class frigates.  I won’t start painting them, however, until I also order some clear acrylic bases for the ships from Litko, and I’m still a ways away from making that order.

Cod Wars!, the rules for fighting actions or a campaign are great.  They are available as a .pdf download from Wargame Vault for $12 normal price, but David’s Long Face games often have sales. They include rules for engagements, and include plenty of ship cards for the vessels that took part.  The included mini-campaign looks pretty interesting too.

With all the other projects I have floating around, this may seem like one more thing to do.  But as my friend Michael Koznarsky once told me, when he was explaining me to someone else it was “Kevin, he does the weird stuff.”

2 comments on “Cod Wars: More of the Weird Stuff”