Yesterday we played our first game of Song of Tomahawks and Drums at the Game Matrix.  It was fun. Kind of quick and dirty with lots of opportunity for risk and die rolling. 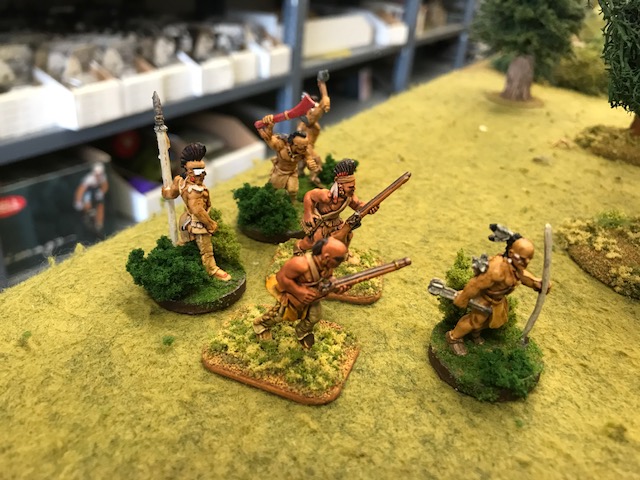 As soon as I got home from vacation, I made a point to tackle the five Flint and Feather figures I began painting, and wrap them up so I could contribute some figures to the game, despite the fact David Sullivan had plenty.  And I managed to get them done.

These are some of the most enjoyable figures I’ve ever painted. They are large, kind of chunky 28mm figures.  They are highly detailed, lots of bits to paint, but those details are also well-articulated, and fun to get at.

Never bring a bow to a gunfight.

I tried to stick to the suggestions for painting on the Crucible Crush website. I began by spraying them with a white primer. Then I painted them overall with Vallejo Cork Brown, which is kind of a dark beige. Then I painted he overall base flesh tone.  There are lots of choices to make.  David went with the Howard Hues Suntan color, which has more of a red tinge.  It’s a nice color.  I went with a   bronze flesh shade, Vallejo Medium Flesh.  I used this color on my Aztecs and with Indians for my Northwest Indian War project. 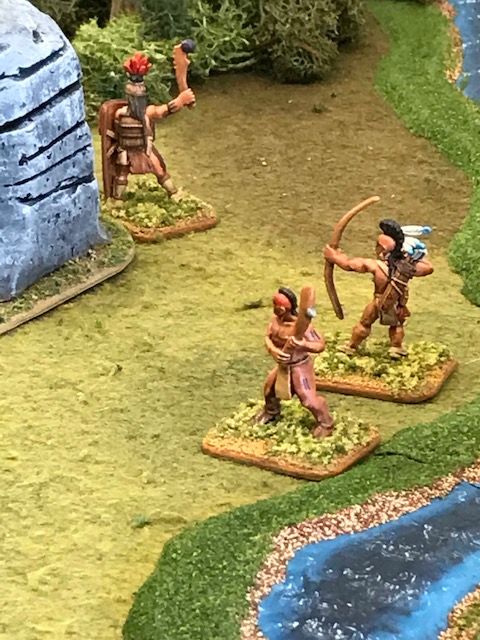 Figures from Dave Schueler’s command hiding behind a rock. Never a bad idea.

After putting down the base color, I washed it with Vallejo Brown Wash.  I added about 25% water to the wash out of the bottle and that allowed me to spread it out a bit for better coverage. I’ve thought about making my own wash out of Burnt Umber mixed with Liquitex Matt Acrylic Medium and water, and may try that with other figures. You could also make a wash from Burnt Umber and a little dishwashing detergent and water.  Or maybe just the dip.  Whatever works best for you.  This worked for me.

Painting the rest of the figure was the fun part.  These are intended to be pre-contact Indians.  They are wearing clothing, or using gear that is found in nature.  I used lots of various shades of tan or greenish colors.  Vallejo colors, such as Flat Earth, Yellow Ochre, Iraqui Sand, Buff, Khaki-Green, Desert Yellow, are just some examples of colors used for breech clouts, leggings, pouches, straps and quivers.

Because few dye sources were available to the early Hurons, red, black and various whites were encouraged for coloring war clubs, beading, or assorted decoration.  I pretty much stuck to this.  I went on to carefully brown wash those animal skin leggings and breech-clouts.  I really liked the way my figures turned out.

As for the game. .  . ? I had some phenomenally bad die rolls and left most of my warriors well behind my hero.  He started out well, killing off a couple of David’s French allied auxiliaries before rolling a one in a combat with his French halberd-wielder.  It didn’t turn out well.

2 comments on “Flint and Feather and Beyond”