My friends frequently pay me compliments because I always seem to have new projects completed.  I have very few virtues, but one of them is that I am able to stay focused on projects until they are finished.  That usually means I focus on one thing and stay on it until it’s done. No lures of the new shiny figures, or the new rules set.  I did all the Falklands and Illustrious planes, and the Mad Wet Max boats for Enfilade in the year following Enfilade 2017.  I also finished my Hawkmoon project-well almost, more of this later.

Well, I’ve kind of stepped in a hole. I’ve managed to hoist too many balls in the air and I’m paying for it.  All by choice, mind you, and it will work its way out.

So here’s what I’m trying to do:

Malta-I’ve written about this many times.  I continue to make progress, just not as neatly and as tidily as I’d like.  I’ve completed all the German bombers-12 Stukas, and 12 Ju-88’s.  All that’s left to do for the Germans are a dozen more Me-109E’s and 109F’s and the Germans will be done. But Dave is anxious to start our Malta campaign games before the end of July.  That means I MUST finish my six Italian Cr. 42 biplane fighters as soon as I get home from vacation. I’m running a little behind.

Flint and Feather-I finally got my figures from Crucible Crush.  They are really nice miniatures. CC was a little slow (three weeks) in getting them to me, but they are definitely worth the wait.  I have the first five figures painting, but they won’t be done before I leave for Canada tomorrow. Very fun figures to paint.  Lots of interesting, very paintable detail.  I’m enjoying them a great deal.  David Sullivan plans to run a game using Song of Tomahawks and Drums at Fix Bayonets in September, so I have to get my figures painted by the middle of August.  We’re not talking a lot of guys, less than 25.  But I need to get it in gear. 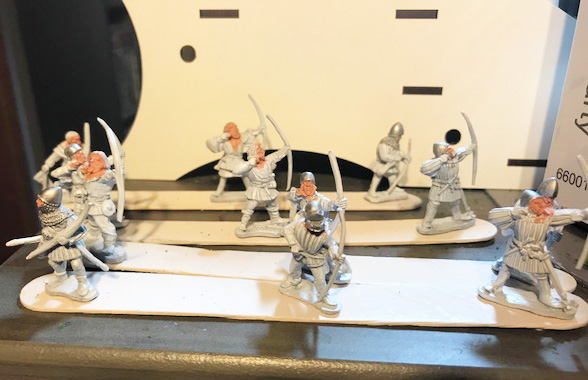 The Hundred Years War: Longbowmen–I’ve lamented my piles of unpainted Hundred Years War figures before, so I’ve decided to do something about it–paint them. I’m starting with my English longbowmen.  They’re all Old Glory figures, and I’ve been picking away at them throughout the spring and in to summer.  I think I’ve painted 48; I do them in batches of 12.  This is for my big battle HYW armies.  It will be a post-retirement project, mostly.  There are rules to re-write and many more figures to paint.  My goal is simply to finish all the longbowmen left to paint, which is 36.  Ideally before school starts in August. When finished my longbows will number 144 figures.  I like that.

Hawkmoon–This project is really done.  Sort of.  Well almost.  In one of the options I have for Hawkmoon, he can use The Sword of the Dawn to call on the Legion of the Dawn.  It’s a single unit of twelve figures.  These are sort of primitive rose colored warriors that he calls on his enemy.  When they are killed they are magically replaced by another.  They aren’t super nasty, there just seems to be an infinite number of them. I ordered some Aztec novice warriors by Outpost Miniatures and I need to paint the dozen of these to finish my Hawkmoon project.  They’ll go fast, but they just need to be painted.  Before I go back to school.  Or sooner.

Philippine War 1898-1902-So I’ve been slowly acquiring a few figures here and there. I’ve got enough Philippine figures for about three units and a gun.  I’ve also purchased one American unit and an artillery piece.  I’m anxious both in a good way, and an anxiety way to get started.  But I won’t let myself begin until I wrap up the CR 42’s, the Flint and Feather figures and the Legion of the Dawn.  So things are on hold for a while.  I’m hoping to get started before Labor Day, but if I don’t, at least I’ll have something to look forward to.  My J-camp wages will also contribute to a large order of these bad boys, and that happens in early August.

Lots going on, as you can see.  Probably too much, but I do love painting, so I’ll have a good time while I’m wading through it all.  And this all leaves aside the publication of Rebels and Patriots–the new Rampantish rules that will cover the wars of America from the French and Indian War and the American Civil War.  I’ve got a few figures I want to paint for that as well.  Ooooh.  So bright. So shiny.  Don’t look into the light.

2 comments on “Lots on My Plate”