Dave Schueler and I plotted for a Falklands scenario for some time.  We ran a game using David Manley’s Air War C.21 game at the Museum of Flight in November. The basis for our Enfilade game was laid there, though the results were not auspicious.

The British player has two ships in San Carlos Bay, the assault ship Fearless and the Type 21 class frigate, Antelope. The Argentines chose their aircraft mix–Navy or Air Force A-4 Skyhawks, Canberras, Mirage Daggers, or the turbo-prop Pucaras.  Then they had to decide how to enter the board.  Each entry point offered some challenges. In the November game, the Argies had nothing but bad luck as some planes were intercepted off-board, missed refueling rendezvous and were shot down by SAM’s.  They were also sucked in by the victory points offered by the Fearless.  They mostly died at the hands of the Harrier CAP, hitting the Fearless only with a dud. Sigh.

We never had a chance to re-run our playtest, so we were trusting to luck when our Saturday afternoon game time appeared and we set up.  One thing operating in our favor was the many friends signed up for the game. Gil F, Al R., Denny H, and Scott A. enthusiastically took on the Argentines.  Chris S., Chris F, and Andrew M were the Brits.

In all our scenarios there are player choices to make.  The Argentines had to plan their strike package and their arrival zones.  The British had plan their patrolling areas.

In the first turn, phase one Al R arrived on the table with two Air Force A-4L’s.  One of his planes missed his refueling rendezvous.  His approach from the west caught the Harrier CAP somewhat out of position.  With the Skyhawks streaking toward the HMS Antelope, Chris S. tried to pull his Harriers around to intercept them, but too late.  The Air Force Skyhawks, penalized for their poor bombing abilities and high percentage of duds, scored a direct hit on the frigate, inflicting heavy damage.  The burning vessel was left in their wake as the Skyhawks survived the defensive fire and flew on. 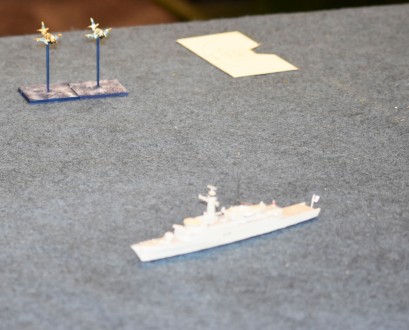 In phase two of the game, farther to the south, Gil F. entered the game board with his Mirage Daggers.  Though it would take a while to reach the HMS Fearless, it was a bigger prize, and the loss of the assault ship could endanger the entire landing campaign. But attention was still focused on the west board edge as Scott A. followed Al with his three Navy A-4Q’s.  The British were a little better prepared as Scott delivered his payload.  Another bomb struck Antelope, but not with nearly as much impact.  But one Skyhawk was brought down with defensive fire, and second fell to Harrier cannon fire.

The action shifted to the other end of the board as Gil’s Daggers began their approach to the Fearless, and Denny’s plodding Canberras made their way toward the assault ship.  Chris S would continue to play tag with the Skyhawks, while Andrew M and Chris F turned to face the new Argentine threat with their Harriers.

Gil pressed his attack with the Daggers, lined up a shot, dodging AAA,  Seacats and British planes, struck the ship with one bomb load. Alas it was a dud.  But he did draw the attention of the defense away from the creeping Canberras, each loaded with eight 500 lb. bombs. 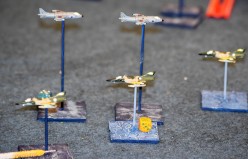 While Gil took his surviving Daggers off to strafe a hapless LCM caught out in San Carlos Bay, Denny approached with his Canberras.  As he lined up the Fearless for his final bombing run, Chris F’s Harriers fired their last Sidewinders and Seacats streaked up from the big assault vessel.  Both bombers were brought down just short of their targets.

The Antelope was ruled to be in a sinking condition.  Though the Argentines sank a British warship, no mean accomplishment, they missed out on the Fearless a much bigger prize.  They were given a minor victory, not enough of a win to alter the strategic scope. They also lost five of eleven attacking planes, so there was a severe cost to the raid.

Most importantly, everybody had a great time. They were a very fun group to run.  Thanks to each of them,  Dave Schuler did most of the game running stuff while became official photographer.