As an Irishman two generations removed from County Cork, I’ve always had a bit of an interest in Irish topics.  I’ve even accumulated some figures over the years, and last week began painting a few of my hidden treasures.  About ten years ago I purchased some figures from Cannon Fodder Miniatures.  It was an Australian company that teamed with Eureka for production.  They had some interesting ranges.  They started with some American sailors and Marines for the river war in China during the warlord era, and had a handful of Irish Republican Army figures from the Irish War of Independence in the 1920’s.  I bought some of the sailors, and I bought some of the Irish and waited for the ranges to be completed, which unfortunately never happened. I’ve added some miniatures from Musketeer, Renegade and Reviresco, but could still use some more.

Last week I began working on my ten IRA guys and today I finished them.  The Cannon Fodder miniatures are nicely detailed.  They are well-proportioned, not massive on the order of Copplestone or Renegade.  They are, generally, either armed with some sort of pistol or an Enfield Rifle.  One figure comes in the uniform of the Irish Republic, but most are in civilian dress.  Cannon Fodder went away a few years ago, but sculptor Greg Blake’s ranges are available at Blaze Away Miniatures in Australia.  There’s actually a few more miniatures available than when I purchased mine many years ago.

I have always been at a loss for how to do the conflict.  I did locate my copy of Leo Cronin’s The Black and Tan War after some frustrating searches.  After re-reading those rules, I think they are exactly what I’m looking for.  Cronin’s rules are a combination of skirmish wargaming and role playing that I think will be really fun. I see setting the situation as a series of tactical problems the players need to plan for and work through that can be played on a fairly small table in an evening.  I think I’d tweak the ground scale a bit. 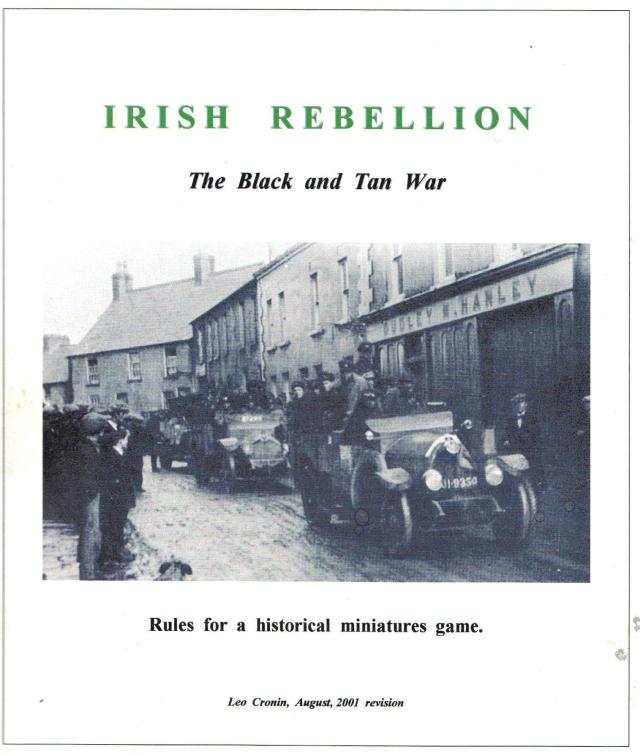 Leo Cronin’s Irish Rebellion: Black and Tan Wars combine elements of role playing and skirmish gaming. It is both useful and practical.

This is not a massive project.  I’d like to double the number of IRA figures I have.  I’d probably pick up some of the awesome Musketeer miniatures to supplement my Cannon Fodder guys, but I’d like a total of 20-25 IRA figures.  I have a few Cannon Fodder Black and Tans, and a dozen of the very nice Musketeer Auxies.  I also bought a unit pack of the Renegade WWI British soldiers in early war uniform, including GS hats.  I’m going to take half of these and paint them as a few of the 80,000 British that served in Ireland 1919-22, and the rest will be members of the Irish Free State Army that had a somewhat different color but generally a similar uniform.  At the most I’m talking about another 40 figures, including civilians. 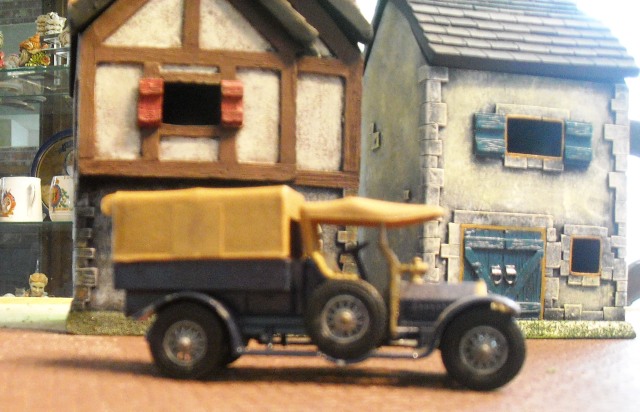 Blurry photo of the Matchbox Crosley tender. Used without the top or canvas cover, the tender is in perfect scale with the miniatures.

Then there is the question of vehicles.  I’ve pretty much decided to do them on the cheap, using old Matchbox Cars of Yesteryear.  I know I can get these fairly cheap, like less than ten bucks a pop.  I have some of the Reviresco miniatures, but they’re just too small.  Matchbox has a great Crosley tender that just needs to be reprimed and repainted. I bought one on Ebay and am awaiting its arrival.  I’ll probably go the same route for other vehicles from the period.  Matchbox makes some nice Model T’s, Maxwell and some interesting trucks/vans. I have a Reviresco Lanchester armored car, but at 1/64 scale it’s a bit small.  I’d really like to snag an Old Glory Austin A/C as a replacement.  The creme de la creme would be a Lancia armored lorry made by Musketeer, but at 20 quid it’s a bit spendy.  Maybe this summer.

In any case, I’ve finished the first ten CF figs, and have primed a dozen more including British regulars, Black and Tans and some smallish Reviresco Royal Irish Constabulary.  More to follow.

22 comments on “My little bit of Ireland project”