It seems like I’ve been working on these figures for months, but they’re finally finished.

First, let’s talk about the pavisiers.  These are French Hundred Years War spearmen.  Typically, pavisiers, so named for the large shield or pavise, are feudal militia, either raised due to feudal obligation to a French nobleman, or pledged by a place.  My pavisiers are Old Glory figures with Northstar spears.  These are spearmen from Paris and Orleans.  The Parisians have the ship on their shield.  The Orleanists have the, well, whatever that’s supposed to be.  Flowers I think.  I really thought the Orleans shield pattern would be a lot easier to paint, but I just could quite make the petals full enough.  The Parisians, once the fleur de lys pattern at the top came together, were kind of fun and less challenging than I thought they would be.

Pavisiers were doubtless available aplenty to the French when on campaign.  They don’t often fight in the big battles of the HYW.  In fact they probably were sent away by King Jean at Poitiers and Constable Albret at Agincourt.  Thought they probably reported for duty in those campaigns, in actuality they simply inflated the French numbers, but were almost certainly dismissed.  Lots of men consume lots of vittles on the march and too many marchers slow down the advance. However, because the Hundred Years War isn’t just limited to a handful of big battles that turn in to big disasters, doubtless militia spearmen like these fought in dozens of battles over the long decades. French militia were required to be trained in the use of their arms, as well as bring their arms and armor to the battlefield.  Not quite the miserable levy scrapings we’re led to believe they were.

The artillery figures are painted to represent the Maryland militia artillery present at the Battle of Bladensburg in the summer of 1814.  These are also Old Glory figures from the War of 1812 range, as are the six pound guns.  They’re quite serviceable figures, though they come with a bit too much lace and frippery. Uniforms are similar to U.S. regular artillery with the obvious exception of the big damn hat.  I wonder how they kept them on in a stiff breeze.  Though the only figures pictured are in the white trousers of the summer uniform, I also painted two section in the blue trousers of the winter uniform.  There was plenty of militia artillery at Bladensburg, though much of it was seen fleeing from their guns. 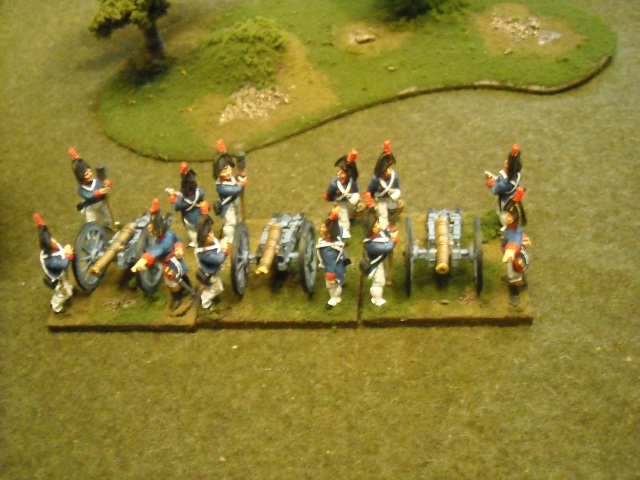 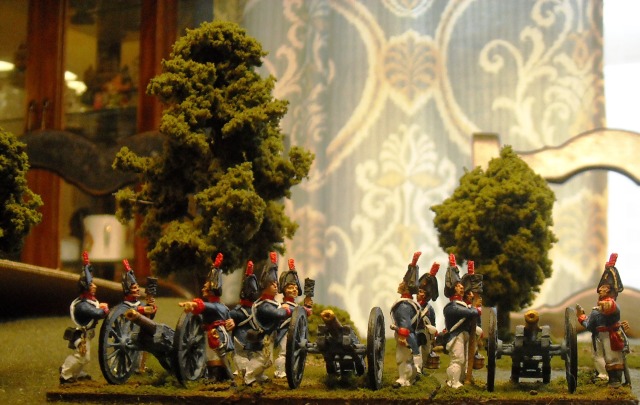