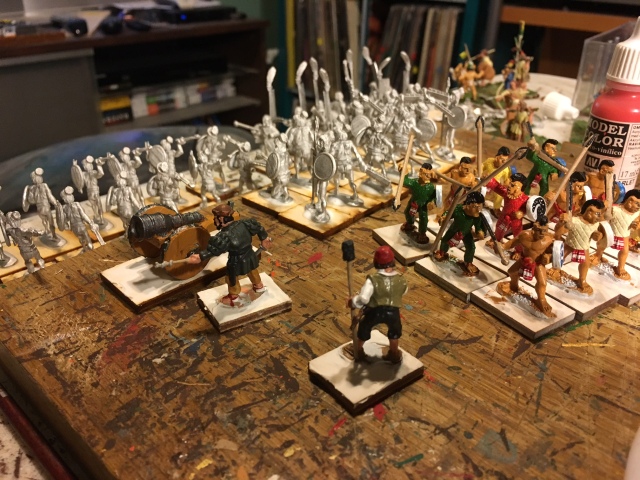 There may be some of you who have considered creating an Aztec army for the Mexican conquest of the early 16th century.  There is lots of reading you can do, some of which is helpful to miniature gamers, a lot is not. I’m hoping to pass along a few easy rules of thumb.

First let’s talk general history of the conquest. It began February 1519, led by Hernan Cortes with a small army of 450, including 30 crossbowmen, 12 arquebusiers and 12 horses; the balance were likely swordsmen.

A note on scale

I always puzzled over WRG lists for this period.  The Spanish did eventually have a fair number of troops, but they lost a lot too. It would be pretty difficult to even sort of represent them accurately with a set of 1:20 or even 1:10 rules. They depended considerably on their native allies, the Tlaxcallans to fill out their forces. Contemporary writers such as Bernal Diaz wrote repeatedly about being outnumbered and surrounded.  In adopting a set of rules for the period, I recommend something to the scale of Daniel Mersey’s Lion Rampant.  I confess I have an intellectual investment in the success of our knockoff, but something semi-skirmish makes sense to properly represent the Conquistadors. I’ve also played Osprey’s En Garde!, which has rules for the period, and those were fun-just pay attention to complete point costs for the Aztecs.

David Sullivan, consulting with me, made Spanish units deliberately small and expensive. At six figures, they are brittle, but nasty.  Generally a Spanish retinue (for lack of a better word,) should have Rodeleros, or swordsmen as the main building block. A unit or two of arquebusiers and crossbowmen are add-ons, but both were slow to load in combat-very nasty when they did fire. Horsemen, trained or not, played a significant part in the Mexican conquest. This will be my Spanish army for Quetzacoatl Rampant:

Note:  These are not likely to appear in a game together.  The troop types are really intended to provide some scenario flexibility.

Any Spanish force must also be accompanied by native allies. The Tlaxcallans in particular  contributed large numbers of troops to the Spanish attacks on Cholula, in Tenochtitlan, and the final campaigns against the Aztecs. They should always be an element in a Spanish army. The Tlaxcallans had similar troops to the Aztecs, but many more peasant troops than the noble and elite troops of the Aztecs:

I confess I don’t fully understand Aztec army organization.  I could be fully correct, which I doubt, partially right, which is likely, or entirely incorrect, which is possible. However, David has done more research than I, but I think I differ with him slightly.

The Aztecs had a warrior society, one that was ruled by elites, a nobility that played a prominent role in their organization.   Unquestionably, there are three classes of warriors in this organization, though I see it slightly differently than my colleague.

The base of the army rests on a motivated, but unarmored class of peasantry.  Peasant warriors had plain shields, and could not wear armor, feathered suits, or sandals. Peasant troops were more likely to be missile troops with the atl-atl or dart, bows, or slings. They formed the front rank of the Aztec army in combat, and were the most numerous. However, peasant troops could achieve status by capturing enemies, who would inevitably be sacrificed.

The second group of warriors were nobles. Noble warriors also achieved status by capturing troops.  For example, they could not wear sandals until they had captured two. Noble warriors could wear the beautiful feathered suits and shields. Some noble warriors, late in the conquest campaign, may have carried captured Spanish swords and shields.Though it seems the nobility were numerous, they were not the majority of the army They formed the second rank of the Aztec army.

The third class of the Aztecs, were the knights.  They were elite soldiers, adept at capturing enemies. Apparently, they were almost martial arts-like in their ability to somersault, move rapidly-Aztec knight ninjas. Maybe not quite so useful against Spanish steel or ball and shot. There is little question, however, they were brave and fierce. Eagle, Cayman, Ocelot/Jaguar knights are some of the elite class.

A final class of warriors are the fighting priesthood. The priesthood had a prominent and pervasive role in Aztec society.  It was a society dependent on blood sacrifice, not just rip-yer-heart-out death sacrifice but for every day living, and the priesthood was large and played an important role of society. And the French thought they suffered from a plague of priests-these guys had stone knives. It seems inevitable there would be a warrior role for some priests like the Templars, the Hospitallers and the the Teutonic knights.  Like other warriors, the fightin’ priests had status based on the number of captives they took.  They could be either 2nd class warriors, like the nobles, or 3rd class warriors like the knights.

8 X 12 Peasant units-These are tricky because I will probably include at least four missile units.  Missile troops probably were integral to many units.  Just not sure how represent this.  David includes a bidower type unit.  Not sure about this, maybe.

4 X 12 suit wearers (Veteran Warriors) I have a pair of Huaxtec units, a unit of barely veteran Quaiaquach, and a unit of suit wearers in feathered suit.

3 X 12 elites.  One unit of Eagle knights, one unit of Cayman knights and a unit of fightin’ priests.

This is kind of a projection.  I have almost all the figures, and am painting more all the time.  Probably enough for two “retinues” in Lion Rampant

Our first play test is scheduled for September 24th, so I’m very excited to give them a try.

2 comments on “Armies for Quetzacoatl Rampant”