Being of Irish heritage-my much missed grandfather was from Cork-the Irish Rebellion and Civil War 1916-22 is of great interest to me.  A few years ago I bought figures from Musketeer Miniatures for this period, a British company, who had an American distributor in the U.S. Unfortunately Musketeer changed hands last year and is now part of Footsore miniatures.

They weren’t my first figures for the Irish conflict.  The Australian company, Cannon Fodder also got a start on the period with a group of very nice IRA gunman, a very nice Auxiliary figure and a British soldier.  Unfortunately they didn’t get very far with the range before Cannon Fodder became Blaze Away miniatures.  Sadly, Blaze Away is now gone and so are 20th century figures from the Cannon Fodder line.  Pity.

A little tighter view of the Lewis gun, left, with his loader.  There is a nice variety of figures in the range and the figures themselves are pretty good. A little bit of breakage, however, and some mold mark issues as well.

I’ve decided to focus on my collection of figures for this period as one of my painting projects for 2016 and yesterday I finished my collection of IRA gunmen–14 in all.  When I bought my Musketeer figures I was very excited about them.  I’m a bit less so now.  Let’s be clear, they are still nicely proportioned, historically correct, and dressed in a variety of period attire, but they have some production issues that make them a bit less than I’d like.  First, they have very breakable gun barrels. At about two bucks a figure, the last thing I want is to get figures that aren’t usable because their gun barrels are broken. Some also had unfortunate mold marks.  Well-detailed pewter figures are hard to clean, and I found these with just a little too much flash in hard-to-get-to places for my liking.  If I was rating them, they’d get maybe a 7 of 10.  Good, but not brilliant. Cleaner than your average Old Glory figure, but not as good as the average Perry figure.

Nothing fancy to paint these guys.  They are a combination of Vallejo and Ceramcoat colors. I did make sure to do some highlighting before washing them with Vallejo black and brown wash.

What’s on my painting table

I’ll be taking on my first Dragon Rampant unit.  I have twelve orcs from a variety of manufactures, including Mithril, Ral Partha, and Alternative Armies.  They work together size wise, plus, as we learned in Peter Jackson’s Fellowship of the Ring, orcs are manufactured in a variety of colors and sizes, so–no problem. 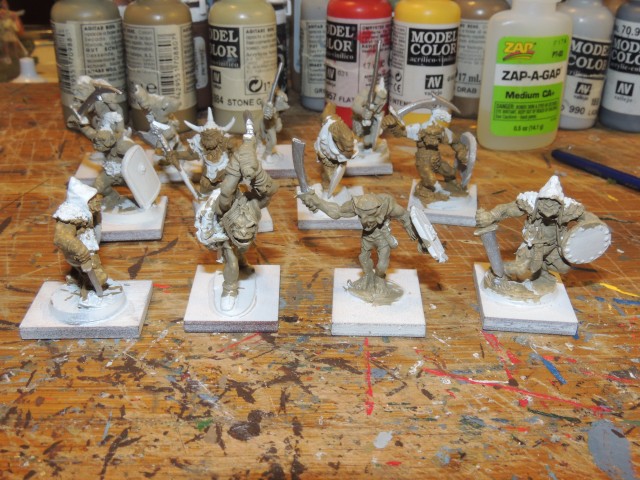 Watch out!! My first Dragon Rampant unit is on the painting table.  It’s a mixture of Ral Partha, Mithril and Alternative Armies figures.  It’s actually a pretty nice mix.

I’ve also dredged up a pair of C in C Boston II’s from my aging airplane stash.  I’m still assembling them, which is not always an easy feat.  They’ll be completed in a camo for the British in the Mediterranean. 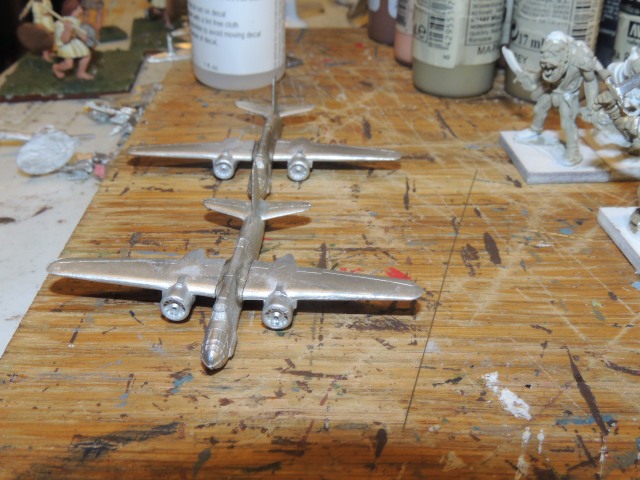 The very nice C-in-C Boston II’s.  I like forward to painting these in British colors for the Mediterranean.

Looking way down the road my next Irish Civil War unit will be the green-clad Royal Irish Constabulary figures by Musketeer–there are seven of them.

I’ve given up the idea of tracking each of my purchases and painting on a running basis, but I have come to embrace the idea that finishing figures is a good thing, and completing more than I purchase is also good.  So I’ll try to keep a running total right here in Less is More. Just in general, I’m not buying new stuff–well sort of.  I did buy some planes for the Channel Dash as well as additional jets for a future Cuban Missile Crisis project. I also have some stuff from ROS coming, some day in my lifetime, that I’ll figure into this initial entry.  The goal is to finish the year with more painted figures than purchases, way more.

34 figures painted (January) – 36 purchased (December) = net of -2 figures.  Still a week to go in the month and no additional purchases planned.  I fully expect this will be the only time I register a negative number.

When I graduated from college in 1978, one really popular album was the debut by Van Halen.  It was like nothing I’d ever heard before.  One of the songs Eddie and the boys covered was a Kinks song “All Day and All of the Night.”  They destroyed it with Van Halen’s smoking guitar and David Lee Roth’s incendiary vocals. And one of the things it did was to inspire the Kinks and their lead guitarist Dave Davies, Ray’s brother, on to some flaming guitar heights of his own. Listen to their 1980 live album, One for the Road, and you’ll know what I mean. 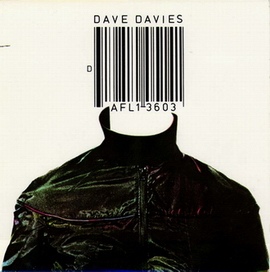 Most importantly, it encouraged Dave, the less well-known Davies brother, but a fine guitarist, to go out on his own.  His first solo effort is AFL1-3603. This is a good record.  All the songs are written by Davies.  He also plays almost all of the instruments. Most of the tunes feature some heavy-handed guitar work. From the opening song, “Where Do You Come From,” there is no mistake you’re listening to a rock and roll record.  But there are other songs, that are also quite good, notably “Visionary Journey” and “Imaginations Real.”

Don’t get me wrong, though this is guitar focused, it is not a record of aimless solo guitar-noodling.  Rather, it’s a product of its time, the guitar is loud, it’s very raw, but supports the song structure without wandering about by way of the third moon of Saturn only to return to what’s important three minutes later. C’mon, it was released in 1980, we’re done with that shit.

I guess my overall verdict is AFL1-3603 is solid, with consistently good songs and good performances.  It won’t remind you of Lola vs. Powerman and the Money-Go-Round, or really not much of the Kinks catalog at all.  But it’s a good record, with a very cool cover, and a worthwhile addition to your colleciton