Yesterday I said I’d give a quick shot to Jim Purky’s Fife and Drum rules for the American Revolution.  Just to be clear, I am a Fire and Fury Regimental guy.  But I don’t play them often, and if I take them off to a convention they can be a little overwhelming.  Jim sent these to me when I ordered from his excellent range of figures a few years back, and they’ve mostly sat out in my painting room staring at me. I’m sure I’ve heard them whispering, “Well?”

Since I’m home alone this week, I thought I’d drag them out and give them a try. I set my dining room table up for “Action at Lizzard’s Farm.” It was great.  I dragged out all kinds of stuff and littered my 76″ by 40″ table with it. I even used one of my 4Ground buildings.

The scenario was simple. Lizzard’s Farm was defended by a brigade commanded by Otho Williams including a battalion of North Carolina militia, the 5th Virginia, the 5th Maryland and a section of artillery.  They were reinforced by Lee’s Legion dragoons and foot.

The British had two brigades including loyalist battalions Volunteers of Ireland and the New York Volunteers, a battalion of the 71st regiment (highland), the 21st regiment, and converged battalion of light infantry.  They kept Coffin’s South Carolina Dragoons in reserve and also had a section of artillery.

I’ll review the game with some photos, but right now I’d just like to focus on the rules.  Let me just say I like ’em.  They are easy without being ridiculous, they are logical and they work pretty well.  As with any one page set of rules, however, there are a few items that aren’t clear to me, and because I wasn’t playing with the author I didn’t have one of those a-ha moments.  So there are a couple of things I’d clarify

It’s possible that’s what Jim meant, but it isn’t clear to me. There is the right amount of death, but not so much as to be silly. 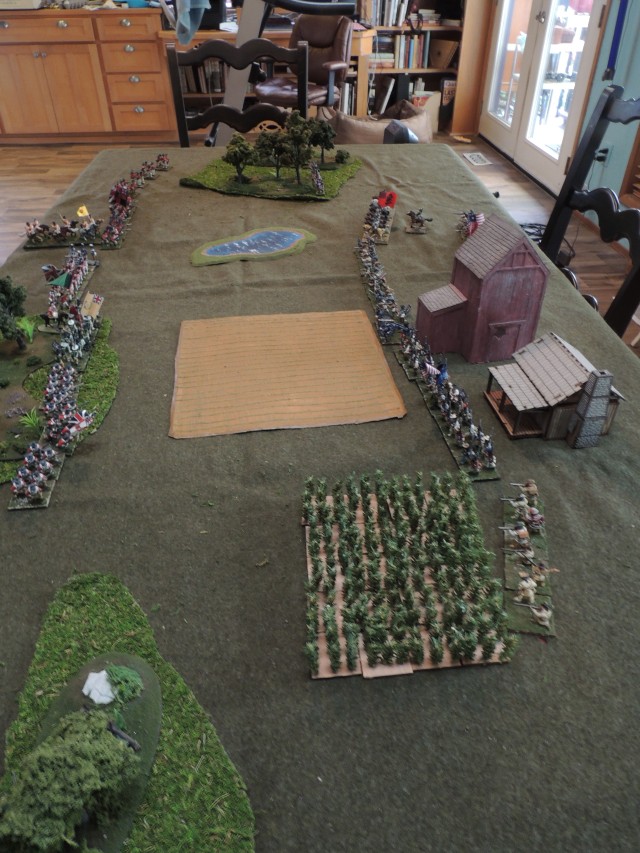 The set up extends across both sides down the table.  I wasn’t trying to be subtle.  In the British center right, they are trying to carry the American position by main force while the British light infantry and the 21st Regt. try to sweep up a thinly held American left flank. The Americans stuck riflemen in the cornfield, hoping to slow the Highlanders’ advance, while screening their right, holding a Continental regiment in reserve.

The British advanced briskly.  The Highlanders quickly emerged from the woods with the Irish and New Yorkers moving quickly with them. The American line units were out range, but the Brits came under fire from the artillery and the riflemen, andsuffered no casualties.

The following turn, however the 71st had to decide whether to engage the riflemen who shot so poorly or advance directly on the 5th Virginia.  A die roll of 5 meant huzzah! Damn the riflemen and charge the Virginians.  The two loyalist units followed suit.  An exchange of musketry found the Brits receiving decided the worst of the firefight.  With the aid of artillery fire, a bit of luck from the militia, and flank fire from the bypassed riflemen, the English line was staggered, but continued their advance.

On the British left, the 21st Regt. marched smartly around the pond as the light infantry prepared to engage Lee’s Legion light corps.  Outnumbered two to one and likely to be outflanked, the infantry began looking for friends. 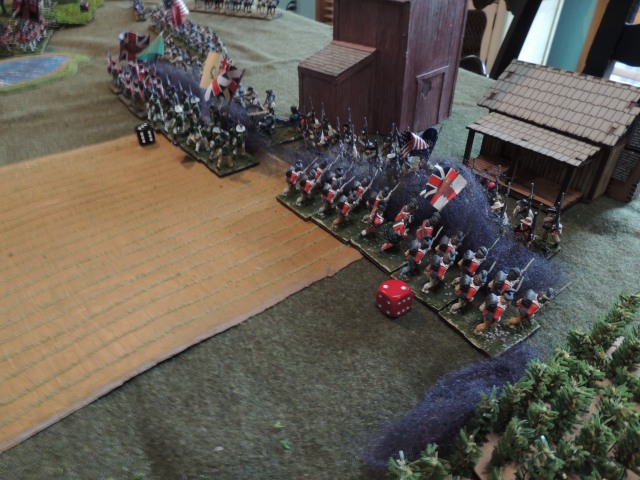 Hightlanders, New York Loyalists and The Volunteers of Ireland advance against Williams’ thin line. The Highlanders also take flank fire from the cornfield.

Turn four was the climactic turn.  The British decided on attack, and that’s where I was unclear about the rules.  The Americans gave them another dose of fire, causing the Highlanders and VOI to become shaken  Though the New Yorkers drove off the artillery crew, they were alone as their flank supports melted away. 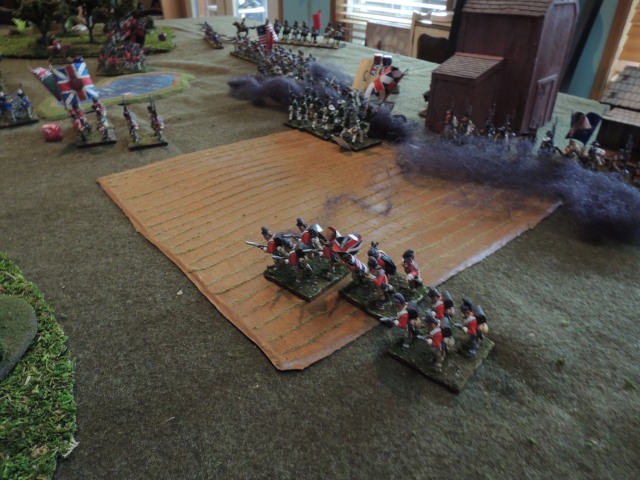 Repulsed!! The Highlanders and Volunteers of Ireland were simply shattered by fire and unable to effectively charge the defenders. The New York Loyalists had more success, capturing the American artillery.

On the British left, the Lee’s Legion infantry corps withdrew from British reach, and the dragoons fell back to support them.  Williams committed the 5th Maryland to face the 21st Regiment.

At that point it was clear the main British assault failed and I called it good.  It was much fun and I’m glad I gave it a try. It was super to pull the figures out of the box again. Would I play a solo game again–maybe if the cards aligned correctly.