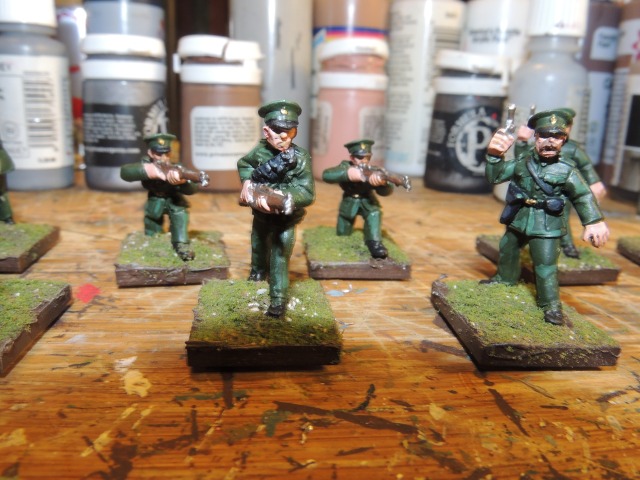 First on my completion pile is the C in C Boston bombers.  These are American built bombers built by Douglas.  Primarily light bombers or attack planes and given the designation A-20A, many were flown by the Brits as Boston II’s.  I chose to paint them in a North Africa/Mediterranean scheme.  They are my entire British RAF representatives for this theater.  Maybe I need more. It will encourage me to paint my GHQ Hurricane II’s I’ve had sitting around for decades. 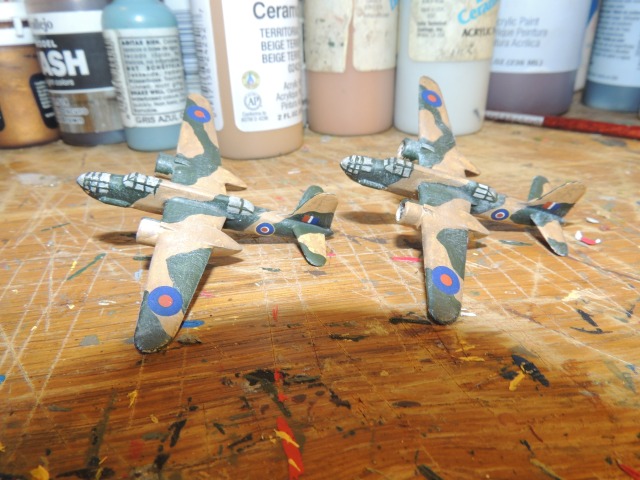 The miniatures are by C in C. The minis have lines that are really clean and I like that.  However, they are bit short of detail.  Overall nice, but lacking a little bit, or the scribing so light for the control surfaces I simply painted out the detail The camouflage is Vallejo Desert Yellow as a base, with Vallejo Military green.  I dry brushed over the whole business with white to lighten up the colors a bit and then black washed the lot. The undersurface is painted with Vallejo Light Grey.  The paint scheme is out of the book Flying Colours.

I’ll probably add two more at a future time so I have four planes to work with.  That’s the minimum.

I’ve also completed nine of the Musketeer/Footsore Royal Irish Constabulary figures. These are figures I really enjoyed painting, probably because they are really easy.  With their dark green 20th century uniforms, there isn’t a whole lot to them.  I used Vallejo Military Green as the base color and did my best to highlight them, but they are still pretty dark. I painted their cartridge belts black, which may be a no-no, but I have no photos to refer to for this equipment, and all other belting was black and the Auxies most definitely wore black cartridge belts.

What’s on my painting table? 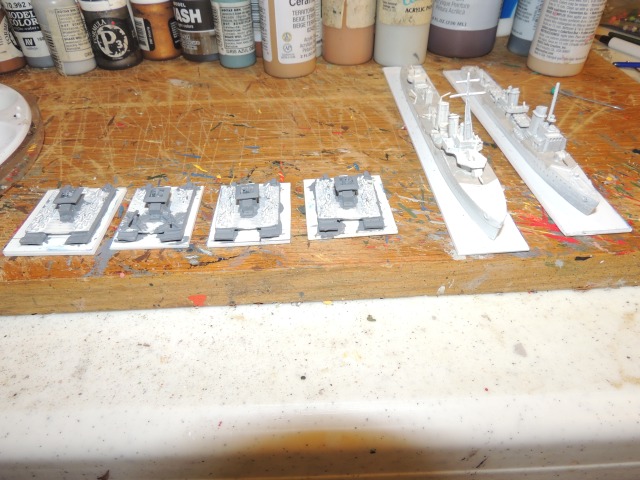 From the RIC to WWII at sea.  I’ve assembled and primed four of the Skytrex-now ROS/Heroics-Siebel ferries.  I had a couple I purchased during our St. Nazaire prep last year. I added a two more in December. They’ll go with my 1/600 coastal collection.  They served in the Mediterranean, the Baltic and the Channel coasts.  A unique catamaran vessel they were designed for the invasion of Britain in 1940.  They were designed as amphibious landing craft, and could carry about 100 tons of cargo, including trucks and tanks.  Experimentation with propulsion systems included truck engines and aircraft engines. All were armed at least with light AA weapons, and some were armed with multiple 88mm guns.

After that, it’s on to a couple of much larger vessels, the German Wolf class torpedo boat we’ll use in the Channel Dash scenario. The second vessel is a British V & W class destroyer.  I’ve decided to do the Wolf in light gray with a white bow wave camo.  The British destroyer I’m going to color up a bit in a Western Approaches color scheme which includes a white hull and markings in pastel green and light blue gray.  No point in tedium.

After the ships it will be on to do the first unit of Rohirrim for Dragon Rampant.  These will all be Mithril miniatures I bought during the early 1990’s, so needless to say they’ve been waiting around for a paint job for a while. Then it will be hydroplanes and assembling some Crosley tenders for my Irish project. I have one model by Sloppy Jalopy and two more by Company B miniatures.  I’ll cross my fingers and trust to luck.

I did make one purchase.  I picked up a pair of Passaic class monitors from Thoroughbred.  Just wanted to fill out what I have. This will give me three monitors from a class of ten. I won’t need any more.  I suspect another order in the not too distant future-probably a Canonicus class monitor and the Civilian Purchased Screw steamer variant of the always useful Yankee Gunboat model.  Any variety of steamer I can put my hands on is a bonus.

And a quick plug

I’ve been buying 1/600 scale ACW ships from Throughbred Figures since they issued the Albemarle almost 25 years ago.  I’ve always loved owner/designer Toby Barrett’s work. It is of high quality, sturdy and for an all metal miniature, very fairly priced.  Now Toby has added superb customer service.  I ordered my monitors on Monday and they were in my mailbox today (Friday.) For the record, Virginia Beach, the home of Thoroughbred Figures, is about as far as one can be from beautiful Puyallup Washington, and remain in the continental United States.  Check it out here.

Normally I would be sharing some awesome music with you.  Unfortunately my listening habits have been detoured by my decision to binge watch The X-Files.  Sick? A waste of time? Absolutely, and I’m enjoying every minute of it. But for the next post, I promise I’ll share a review of Zephyr, by the band of the same name.  Haven’t heard of them?  Well, you will soon.

However, I have bought a few books recently, all of them related to naval warfare in a couple of different periods. Note:  I have read none of them yet, but two are relatively new, and worth knowing about.

Henry V’s Navy: The Sea Road to Agincourt and Conquest 1413-1422 .  by Ian Friel To suggest that books about the Hundred Years War at sea are as rare as hen’s teeth may be giving too much credit to the hens. The only other book-length study I’m aware of is 2011’s Edward III and The War at Sea, 13227-1377 and is pretty much worth a king’s ransom (and somehow I missed it when it came out, sniff.)  I determined not to be shut out when this book became available on February 1, and promptly ordered a copy.  The small volume was not over-priced, and I’m hoping to read it soon. Henry V was a noted shipbuilder and vastly increased the size of the fleet that virtuallydisappeared during the reign of Richard II.

The Civil War at Sea by Craig Symonds.  Symonds’ name may ring a bell.  He’s a prolific writer, best known for his military atlases, but he’s written about many military topics, including the naval aspects of the Civil War.  He tackles this massive topic thematically rather than chronologically, focusing on the changing nature of ships and armament, the blockade, commerce raiding, war on the rivers, the attack on ports (using Charleston as an example) and the success of the Union naval strategy. The book has only 170 pages of text, so it tends not to get hung up on detail, so if that is your desire this may not be the book for you.  But as a thematic interpretation of the Civil War on the water, it could do the trick.

The Confederate Steam Navy by Donald Canney.  I have only ordered this book and haven’t received it yet.  But I have been angling for a copy since it was released on December 9th.  Canney’s book on the Confederate Navy is supposed to mirror his brilliant two volume study of the The Old Steam Navy that went out of print in the ’90’s.  These are books I constantly consult and I believe the new book will be just as useful.  So much of what is written about the Confederate Navy is conjectural while Canney’s work always seems to be anything but.  It covers all types of vessels from the ironclad rams to blockade runners, and as with his previous work, will be crammed with illustrations and photos, some not previously published.  I’m excited.  Hoping it arrives from Amazon today.