I started preparing planes to paint while I worked through deadline week, and waited for my Aztec order from Eureka Miniatures USA.  As I stated in my last post, I am adding planes to my collection that could have participated in air action during the Cuban Missile Crisis. I have twenty planes altogether, including Navy fighters and attack planes, as well as Soviet piloted MiG-21’s.

I’m beginning with some F-100’s by Scotia Collectair.  They have a nice shape, but nothing special.  Very clean but not much scribing to work with so I have to paint in a lot of the detail.  I wouldn’t mind trying a couple of the Raiden minis, just by way of comparison. These are pretty easy work, with a base silver by Formula P-3.  The blue is Vallejo Prussian blue.  The paint scheme is loosely modeled on the 366th Tactical Fighter squadron from England Air Force Base in Louisiana.  However, by 1962, many of the USAF units are beginning to lose their fancy squadron insignia, according to my Squadron/Signal book on F-100’s. 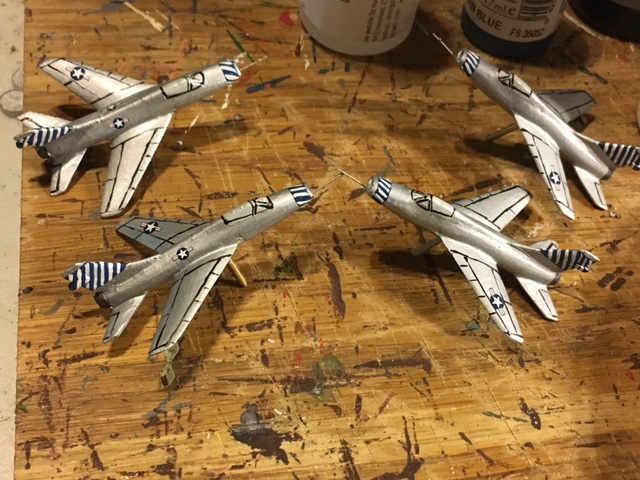 By 1962 there are still a fair number of Super Sabers in service, mostly as tactical fighters, i.e. fighter bombers, though that role is mostly being taken over by F-105B’s.  There was an incident over Cuba in November 1962, just after the missile crisis, in which F-104’s overflying the island were intercepted by MiG 21’s and were fired on, but no blood, no foul. So, the F-100’s have a role, but air superiority is clearly one they’ve passed on to other planes.

Oh look, a dozen U.S. Navy planes to finish by next weekend. Four each of F-8 Crusaders, F3H Demons, and A-4C Skyhawks.  Not difficult to paint, but lots of them. They’ve gotten their top coat of Light Gull Grey by Testors acrylic.

This morning, Saturday, I saw Dave’s post that he has a plan for our Museum of Flight scenario for Sunday, November 6th. Yep that’s a week from tomorrow and it includes a fair number of planes I don’t currently have in my arsenal, so the Smyth aircraft production line is underway.  Thankfully there aren’t any evening school commitments for this week . I could have a busy day tomorrow (Sunday) but I think I can squeeze in a couple hours here and there for painting and plunking decals on the F-100s.  I’ve got 20 planes I’d like to have completed for the Museum game, including four MiG -21’s, so I’ll have to give it my best shot.  Will keep you posted.