I finally finished these guys last night.  I made their bases a bit busier than I usually do.  They are supposed to be able to fight in difficult terrain, and at Poitiers–always a guiding star for me-were able to navigate swampy terrain They aren’t brilliant, but the first rule of miniature wargaming is that any painted unit is a WELL-PAINTED unit.

Old Glory longbows on half stands, ready to go.

So my Dick Blick order arrived in an enormous padded mailer.  Inside were my carefully packaged 0 Escodida Versatil brushes.  I carefully pried them out of their packaging and was singularly unimpressed.  They are the right size but as miniature gamers we live and die by brush points.  No brush point, much less detailing. These didn’t come with one of those little protective plastic thingies that fits over the ferrule, so one of the brushes had any potential points squashed right out of it.  The others retained something of a point, but only one of the three brushes seems to have “winner” exuding from it.  I’ll have to work with them.

My Escondida Versatil brushes arrived from Dick Blick yesterday. I am not optimistic, but they’re the brushes I have . . .

Re purposing My Den

My den/painting area/ music room is tiny.  It’s 8′ X 8′ and is crammed full of miniatures, board games, my stereo, a television, dvd’s all my Kevin stuff. It had also become virtually unnavigable.  As my music consumed a bigger and bigger portion of my time and resources, the situation I had in there with my painting table plunked right in the middle of the space made accessing my stereo difficult. So I did some switching, moved my table to a place that renders the rest of the room more accessible and doesn’t negatively impact my ability to work efficiently and comfortably The lighting is probably better, and will be better still when we emerge from the great darkness of the Northwest winter, which seemed to begin yesterday and will last until June. 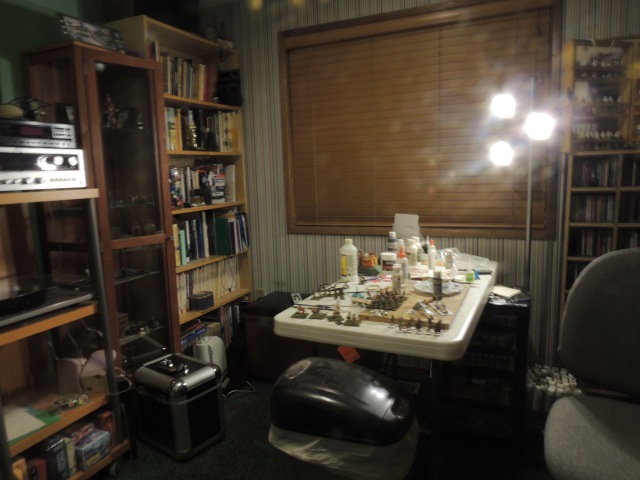 It’s hard to tell from this photo, but I’ve pushed my painting table toward the back of the room and near the window. It’s opened up the space so it’s more walkable without interfering with my work space.

Yes Enfilade is in May, but I like to have things worked out well in advance.  Dave Schueler and I always work together on at least one game.  We’ve done two super successful rollouts: the bombing of the Tirpitz–which was just gorgeous–and the prize winning Raid on St. Nazaire from last year.  This year it looks like we’ll do The Channel Dash of the Scharnhorst and Gneisenau and various auxiliaries from Brest in Brittany to the German port of Wilhelmshaven where they could threaten North Atlantic convoys.  It turned into a disaster for the British who could muster little naval power to threaten the German battleships, and whose repeated air attacks were driven off with heavy losses by defending elements of the Luftwaffe.  The sheer variety of British aircraft–Wellingtons, Spitfires, Hurricanes, Swordfish, Whirlwinds, Hampdens and Blenheims make it all pretty attractive.

Beyond the Channel Dash, I’m not too sure what I’ll do.  After last year’s “fill the car” excitement, I may stick to something a little less demanding.  I have a bunch of 1970’s era hydroplanes to paint–I could update my Thunderboats!, which is always a crowd-pleaser.  I could also do some ACW naval stuff.  I still have some ships to paint, and I’m sure David Sullivan and I could do something.  He was interested in an Ironclads game.  Now that would be retro.

What’s on Your Painting Table?

With the longbowmen finally completed, I’m just dorking around with things I want to do. The Miami (gunboat) is a step closer to completion.  I’m getting ready to base some figures for Mars. I’ve primed a big Baueda pavilion for a potential camp for the Hundred Years War.  Not terribly focused, eh?  It shouldn’t take forever to paint them.  I think after I do that, I’ll paint the Volunteers of Ireland for the American Revolution.  I bought the GMB flags for them, they have a different looking uniform, and they are pretty small for the period. After that, it’s the gunboat Selma from the Battle of Mobile Bay.  That should get me into November.

A bit more done on the Miami. My goal is to be finished, based and rigged by the end of the week.

And Now For Your Listening Pleasure

I have a bunch of mini collections in my pile o’ vinyl.  Little Feat, Steve Miller, Boz Scaggs and a few others.  One guy I really like who is kind of under-appreciated is Robert Palmer.  He’s a British blue-eyed soul singer is best known for his lounge-lizardish appearance on some early MTV videos.  “Addicted to Love” is his best known video with the long legged, pretend backing band. But before that he made some very good R and B influenced albums.  Before his MTV fame, however, he teamed up with two former members of Duran, Duran John Taylor and Andy Taylor, and Chic’s Tony Thompson.  Together they formed The Power Station.  Their first album, titled, simply enough, The Power Station (1985) is pretty enjoyable.  It is energetic synth-pop, but not so much as to be annoying.  Palmer’s vocals are powerful and the two Taylors have enough guitar influence to keep things interesting.   My favorite song is a cover of TRex’s “Bang a Gong.” Good stuff, worth a listen.  Picked mine up for half a buck at the Goodwill Outlet.