Stern quarter view of Bay Area Yards Dunderberg really shows all the rigging I did.  It’s spare, but enough to show I rigged it.

My Ship Udda Month Club took on a life of its own in July.  It ended up being three ships, though I’ve stowed the Smyth Shipyard for the time being.

First let me emphasize that though everything seems fiddly and tedious, building Mississippi, Tuscarora and Dunderberg were labors of love. None of the ships came out perfectly-there’s bowed ratlines and rigging wire I wish could have cut closer-but in each case I learned something.  Probably the most important thing I learned from the experiences is not to be afraid of rigging these miniatures. In the great scheme of things that means little.  It doesn’t solve the coronavirus pandemic, improve the economy or bring racial justice to the United States, but it does mean I shouldn’t be afraid of hauling my remaining unbuilt ship models out of their special hiding place giving them just a little something extra. Nothing I have ever done in this hobby has given me more pleasure

Supplies and Tools: You don’t need a ton of anything to rig a ship model.  I like pre-formed photo-etched brass ratlines.  I use those from Battlefleet Models.  Unfortunately these folks are out of business.  Their work is being reproduced by a Chinese company called Oceanspirit. They’re not expensive, but it’s important to be strategic about how to best use the selection of sizes available.  You should be able to get two ships out of a single sheet.  Atlantic Models also produces pre-formed ratlines, though I have no experience with them.  I use .006 brass wire from Detail Associates.  It’s sold on the web and it is marketed to model railroaders. A five pack of wire is enough to rig two ships and it isn’t expensive. Shipping it is expensive so buy lots. 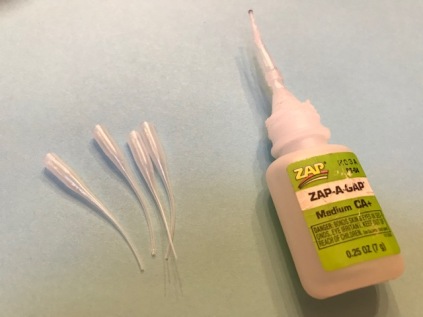 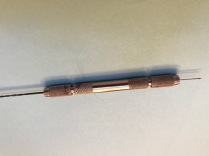 The tools are pretty basic.  CA glue with the skinny cap applicators. I use floss scissors for embroidery for cutting wire and ratlines and-most importantly-cutting excess wire. after rigging pieces dry.  Though I have really small hands and fingers, tweezers are invaluable. A pin vise is also really handy for drilling holes for rigging stays.

Another view of Dunderberg shows of the model’s clean lines.

Another look at Mississippi shows the simple rigging plan.

Here are three suggestions I can offer from my experiences that may help if you are interested in building and rigging your ships miniatures.

A.  Be patient, find a systematic approach.  When I was working 40 or more hours a week I was a regular painter and everything was a rush to get done. I had maybe an hour each day to work on stuff.  I confess I am no longer in that position and my time is mostly my own. Rushing to rig a ship will leave you frustrated and dissatisfied. Finding logical steps to rigging a ship is really important.

Things to think about ratlines. Be sure your ratlines are too long and cut them later or you’ll be muttering  profanities at your incomprehensible stupidity.   Ooooh, and one more thing spray prime and spray paint your ratlines in advance.  Painting them by hand, once on your ship is torture and you will not be happy. If you don’t use pre-formed ratlines and prefer individual strands of wire, that’s fine, but again be sure to do it before you take on the running rigging.  Doing it after won’t allow you to the space you need to do a good job. I think of it as working from inside to outside.

Then it’s on to running rigging, which I do with fine wire. The first ship I ever tried to rig was a Thoroughbred Hartford.  I did it with pre-stretched thread.  I did my very best, but the rigging still drooped.  I know folks use thread and have lots of success. It didn’t work for me, so I use wire. A few suggestions 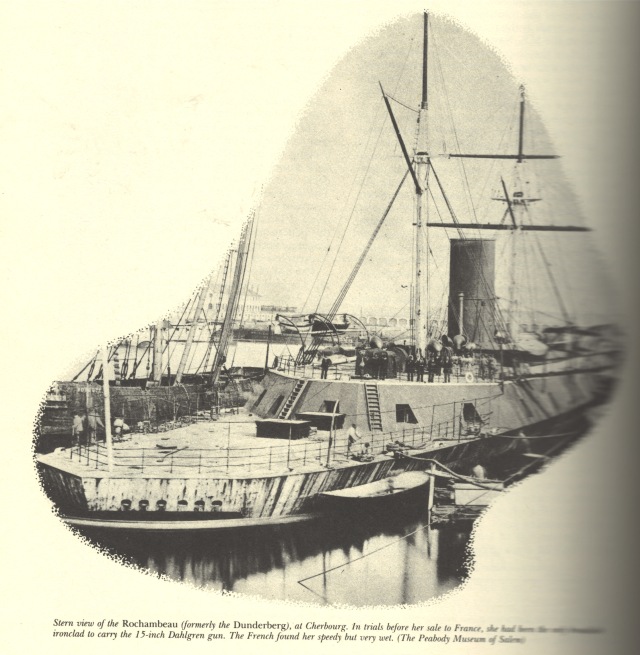 This photo, also from Canney, shows Dunderberg as Rochambeau in French service. Note the location of the mainmast yards in the picture.  It differs from the line drawing Also confirms the simple rigging and the supports for the funnel.

B.  CA glue is your friend; you just need to train it. There are lots of different adhesives out there.  I use CA glue or Super Glue or Crazy Glue or whatever you wish to call it.  My brand of choice is Zap Medium CA+ with the green label.  It dries fairly quickly, and it also dries finally, so be sure you really want to put that there. I’m sure other kinds of glue can work as well, I just don’t know what they are and don’t use them.  I also recommend buying a pack of the glue caps with the long narrow tips.  They really do help get the right amount of glue to the right place.  They clog up.  I steal lots of the plastic-

Completed Tuscarora shows the simple rigging, given the loss of upper yards.

knobbed pins my wife uses for quilting to clear the tip.  I don’t tell her.  It’s also easy to just cut the end off the tip until it’s far enough down that it makes sense to replace it.

C. Finding the ideal place to glue.  If you look at photos or rigging diagrams, there are usually good suggestions.  Toby Barrett with Thoughbred figures sends a rigging diagram with each of his masted ships. Rigging to masts or yards are fairly easy.  Stays to the gaff booms are really tricky.  The top end goes to that boom so you have one end covered, but what about the end that would normally attach to a cleat?  Thoroughbred models have cleats–usually not where I need them.  Bay ships have nothing. You could simply glue them to the place where the hull side and the deck intersect.  It’s often hard to get a drop of glue in the right place, but if you’re careful that’s manageable.

However, I learned a valuable lesson while building the Dunderberg. First, that miniature is very large, very clean and very well-cast. It is also very simple-as the actual vessel was. There was no place to put gaff stays because there are no hull walls. I decided to drill small holes in the decks using a pin vise and glue one of the ends in the hole.  It worked great.  In fact it worked so well I will do it on all my future builds including metal ships.  It insures uniformity in the rigging and I will be a happier camper. 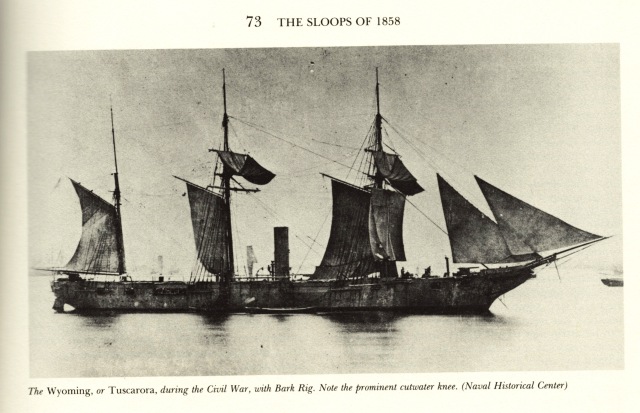 Rigging Tuscarora was developed from this photo.  Thought seriously about sails, questioned my sanity and moved on.

Another view of Tuscarora by Thoroughbred Figures. Just a wonderful model to build. Terrific detail and fun to work on.  The hammock netting posed a bit of a challenge to making the ratlines straight.

Just want to close with a thanks to those whose work I saw on the old Bay Area Yards website–Pat Hreachmark, and others.  My friend George Kettler’s work has always been an inspiration.  Sometimes it just takes some doing and being willing to make mistakes to develop the confidence to take on the next big thing and I’m feeling good about this.  August’s ships will take another step as the ships get a bit bigger with a Thoroughbred Hartford and a Bay Minnesota on the stocks. Looking forward to it.