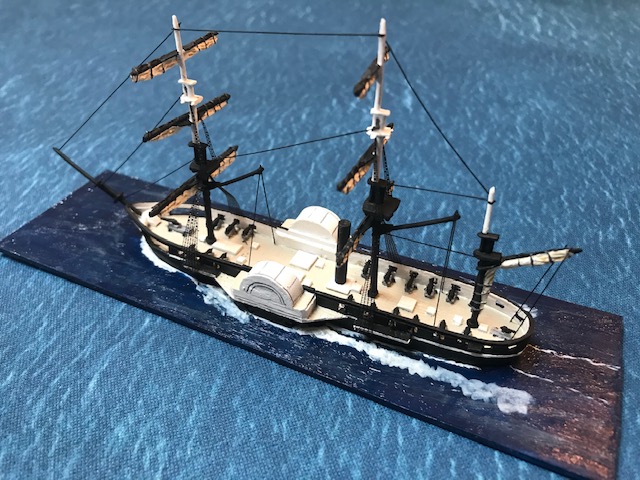 Another June has flown by, er crawled by. There were some good things that happened, but the germ certainly puts a damper on things.

I actually squeezed a few games in during June. That was a step in the right direction. There’s little question I was more mobile in June than in May, which seemed like a good idea at the time. However, as infections accelerate in Washington state generally and Pierce County specifically, I may find myself throttling back a bit this month.

I continue to work on my Philippine project, and I also wrapped up some 1/300 American transports from WWII. I have them, therefore I’ll paint them. I expect July will be the same. More planes and more Americans for the Philippines.

However, my biggest June accomplishment was getting started on the 1/600 Bay Area model of the Mississippi. In my last post I showed the beginnings of the project but just in case you’re interested in doing a similar miniature with masts and rigging, I thought I’d walk you through the project.

Just as preface, however overall this is a miniature I’m really proud of. It’s one I’ve learned a lot from and it is not perfect. The Mississippi joins my fleet of 83 1/600 scale ACW ships from a variety of manufacturers, including some scratch-built models by Larry Enoch.

I bought the Mississippi as a kit from Bay Area Yards. It came with the hull, the masts and guns, so all I needed was to do the miniature. I probably could have given a little more attention to preparation and sanded some bits smoother. Except in the stern, which needed a little bit of shaping, the few irregularities in the casting didn’t become apparent until the ship was assembled primed. The Bay guns are very nice. They are quite detailed and sized properly for the ship. There were 18 eight-inch Navies, a large Dahlgren on a pivot mount for the bow ten inch gun, and a small rifled gun for the stern pivot. The mast set was also nice, though I would have liked to see a bit longer yards, but now I’m just being picky.

I began by assembling the hull bits. The long smokestack was separate and cast nicely in resin. The guns are metal. I used Donald Canney’s Old Steam Navy to help me position things properly. When all was glued down properly I cut a piece of sheet styrene for the ship’s base. Mistake number one, I used a piece of plastic that was too thin. It was an old hunk I had laying around. Ideally I’d use something like .050 inches, and this was more like .030. By the time the ship was done it was a bit bendier than I’d like. Sigh. 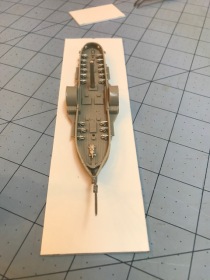 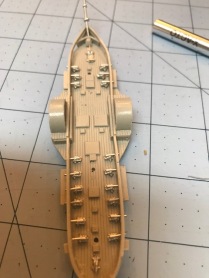 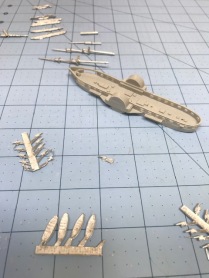 After priming it was on to painting. Painting masted ships for the Civil War is always a bit excruciating for me because there is an important decision to make: dress black or wartime gray? In fact, there is a terrific picture of Mississippi in Navy Gray shortly before she was sunk on the Mississippi in 1863. 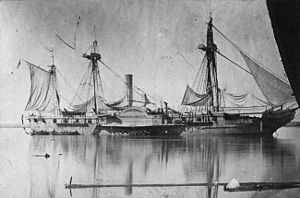 This is a great photo of Mississippi.  Note the shortened yards and top masts.  The ship is painted in wartime gray including the prominent smokestack.

However, Mississippi is an important historic ship. Yes, it was at New Orleans and was sunk near Port Hudson, yadda, yadda. But it was Commodore Matthew Perry’s flagship when he sailed with a squadron of American vessels to compel Japan to open up to western trade in 1853-4. That was the Mississippi I wanted to build–black with a thin white stripe. 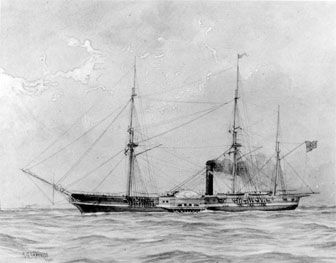 The outer hull was painted with just a craft black paint, with the interior hull painted a craft white paint.  The deck color is Vallejo Deck Tan, which I like a lot because it isn’t too bright. After looking at a photo of the gun carriages for the Dahlgren guns on the USS Constellation in Baltimore harbor, I went with Vallejo Light Grey for the gun carriages.  I added black wheels and gave a quick daub of charcoal to the barrels. Painting the white stripe was interesting and challenging, but I stuck with my white craft paint knowing it would take multiple coats and touch ups. The protrusions for standing rigging, and the location of the stripe made masking impossible, and honestly I’m okay with how it turned out. When all was done, I lightly dry-brushed the hull and stack with Vallejo Neutral Grey just to give it a slightly weathered look.

I moved on to the masts.  They needed some assembly as the yards and booms needed to be glued to them.  They all fit well, though I managed to stick the wrong top yard on each mast.  Not a big deal.  After assembly, I primed them and then glued them to the hull.  They fit nicely.  Then it was on to paint.  Black lower masts and yards, white upper masts. I painted the furled sails with a craft Ivory paint and used Vallejo buff to paint in the folds, just for a little contrast.  I used the Neutral Grey to paint shrouds. 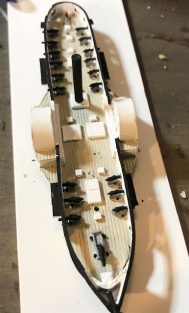 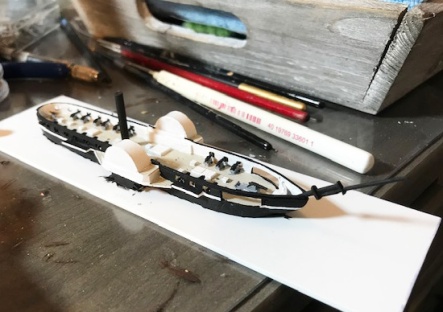 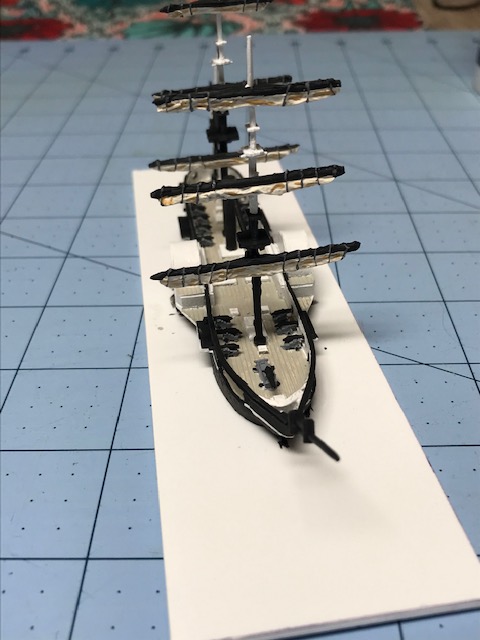 At this point, the builder has a decision to make.  For me, all of my ships are game pieces and I expect other people are going to handle them.  At this point is appropriate for any person building for this purpose to say “Whoa!, I’m done,” deal with the base, spray it with Dullcote and declare victory. But if you want a challenge and a bit more inspiring finish, I’ll share what I did.

I’ve rigged other ACW ships.  Some were super simple and easy, and others were more involved.  Twenty or so years ago I did the Thoroughbred Hartford.  It’s a great model with lots of amazing bits.  I rigged it with thread.  Mistake.  Unless you can really reef on it the thread will always begin to loosen  and droop. I pulled it out to look at it yesterday-surprise-still rigged, but still droopy.   I’m pretty sure I bought th pre-stretched thread, but because we can’t deal with firmly-anchored masts thread was a loser for me. I also built and rigged the Thoroughbred Mohican (as Kearsarge) and Alabama.  They were rigged with .006 brass wire.  It was doable but challenging.  That was probably twelve or so years ago.  I had no pre-formed ratlines, but made do.

I tried something a little different with Mississippi and began the rigging process with pre-formed ratlines.  Mine are from Battle Fleet Models.  I’m not sure they are still in business, but there are still some out there. There are a variety of sizes and shapes.  I had a somewhat slightly used sheet of the photo-etched bits and tried to make some fit a purpose I shouldn’t have.  That was a mistake.  There are clearly some that fit the purpose well and I needed to do better planning.  I ended up ripping some off after they’d been CA glued in place.  Not a pleasant experience.  It actually slightly twisted the foremast.  Lessons learned.  But overall I like the look and am trying to track down more. 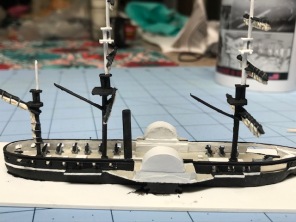 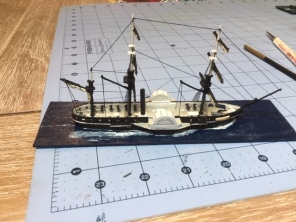 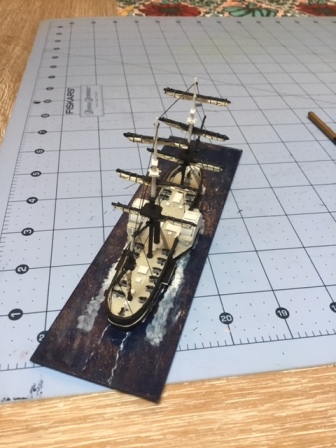 A couple of suggestions whether you are using these or Atlantic Models or the Ocean Spirit photo etched ratlines.  I primed and painted mine before sticking them on the ship. I used Tamiya white primer but whatever you have should work.  Then I sprayed them black.  I use floss scissors for all my rigging adventures.  They are tiny scissors for embroidery work, but strong enough to cut through the photo-etched metal and brass wire. They’re also great for working with decals for 1/300 scale airplanes.

After the ratlines, I’m ready to move on to other rigging.  I keep things generally simple and tend to favor rigging in straight lines from front to back. There is tons more you can do, but it’s now an enhanced game piece, the next step is museum piece. I use the thinnest brass wire I can get.  It’s by .006 inch by Detail Associates and is available on the web.  I want something I can cut easily with my floss scissors, don’t want to have to use metal cutters.  I usually cut my wire a little long and glue one end as flush as I can to the contact surface and try to get some stick before attaching the second end.  Then I let it sit.  At least thirty minutes, maybe longer.  I go mow the lawn and come back.  Then when the glue has had time to cure, I cut whatever is leftover.  I think there are 14 pieces of wire on the Mississippi. After that, I carefully paint the rigging black.

I did a bit of touching up and moved on to the base.  It seems I never paint two bases alike. I went with Vallejo Dark Prussian Blue, which took a couple of coats.  The I dry-brushed Vallejo French Mirage Blue over the top. Then it was painting the ripples and wake around the ship itself.  There is no right way to do this, but I was pleased with what I got. After that I covered the lot with Liquitex Clear Dense Gel Medium.  I wish I’d been a bit braver with this last step and sculpted it as well as David Sullivan, but I’ll just tip my hat to him and call it good.

Though I had planned to do a ship per month, I don’t think I’ll wait until August for my next ship.  Either the Bay Dunderberg or Thoroughbred Mohican will be next. 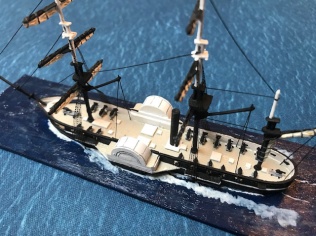 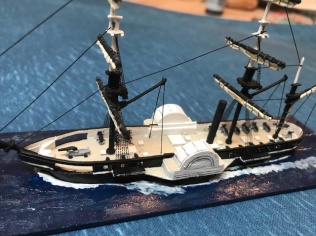 6 comments on “Completing the USS Mississippi”