Nothing like a dutiful priest to stoke the locals with revolutionary fervor.  Even if that fervor means ducking the odd arrow here and there.

Saturday morning I assembled some flags and glued them to figures and that wrapped up half of Philippine American War project. I’ve been working on these figures for nearly three years, so that’s big doin’s.

Republican rifle units and command stands in the lower left. 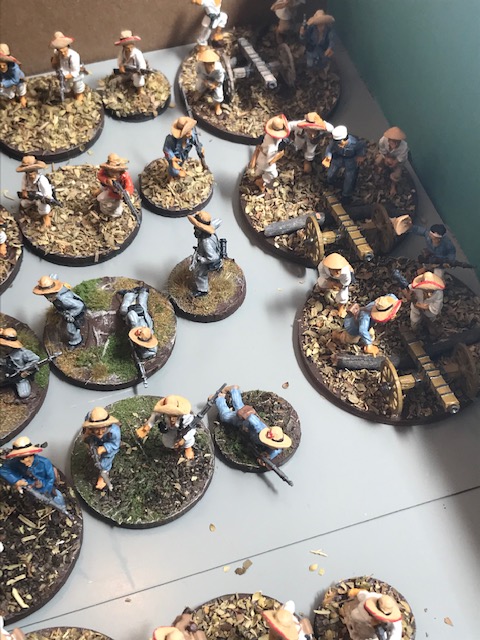 Lantaka cannon were home-made, mostly cast from church bells.  Can’t imagine they were particularly effective or safe for the gun crews.

The Republican army doesn’t have a lot of variety.  There are either  tribal militias with hand weapons and some fire arms they don’t know how to use.  The good news is they are enthusiastic and  aren’t afraid to rip out your liver. Then there are the Republican infantry.  When they fought the Americans on even terms, in earthworks outside of Manila in 1899, they just weren’t very impressive.  They were skittish and poor shots.  Despite having weapons equal to the American volunteer units facing them, they gave up strong defensive positions after little resistance, giving little damage to the attackers.

While I can’t imagine the bolo-armed locals really want to go toe-to-toe with the Americans, they can be really nasty if sprung on the imperialists from cover.

Things became a bit more interesting as the Americans moved into the hills of northern Luzon, and the rivers bays and lakes of the southern part of the island.  The war took on more of an insurgent aspect, with much more movement, supply concerns and amphibious operations.  This also was the standard condition on the islands other than Luzon.

Still quite a few Americans to paint.  Mostly infantry and dismounted cavalry, but I do have one mounted unit.  There are also some guns, which I am working on now, and a pair of standard Gatling guns.  These are likely to see less action because they’re just too hard to schlep through the jungle in a monsoon, and are more likely to get dumped in a rice paddy somewhere. 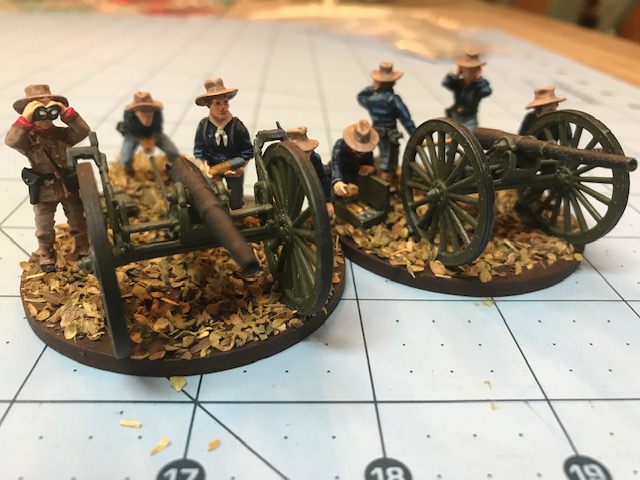 The Miniaturas 1898 3.2″ American field gun is a splendid model with very animated crew figures.  One of the crews (left) is loading, while the right crew is firing.  Highly recommended.

I continue to distract myself with other small groups of stuff, like airplanes, just to break up the monotony of sameness.  I’m working on a second group of four American transport planes.  Why?  Because I have them and they need paint.  I have a few other batches of planes to work on too.  Another project I’d like to work on this summer are my 1/1200 ships for David Manley’s Cod Wars.  They should be fun and not terribly painful.

Finally, Michael Koznarsky and I have chatted up the idea of tackling our backlog of 1/600 scale ACW ships.  Neither of us have dozens of ships, but we’ve both got some.  Michael has five and I have probably eight. We decided to form the Ship of Da Month Club and try to get one ship done each month starting in July.  My first ship is the Bay Area Yards Mississippi. I am especially attracted to this sidewheel frigate because of its role as Matthew Perry’s flagship in his expedition to Japan in 1854.  Thus it will probably end up in black rather than Civil War navy gray.

With the model under construction, I would just like to comment that it is a very good miniature.  Easy to assemble, and the bits are quite nice. The guns are the right mix of 8″ Dahlgren smoothbores, a ten inch Dahlgren pivot and the little light Parrott in the stern pivot. The masts are nice and large, though I think the yards aren’t quite the right length.