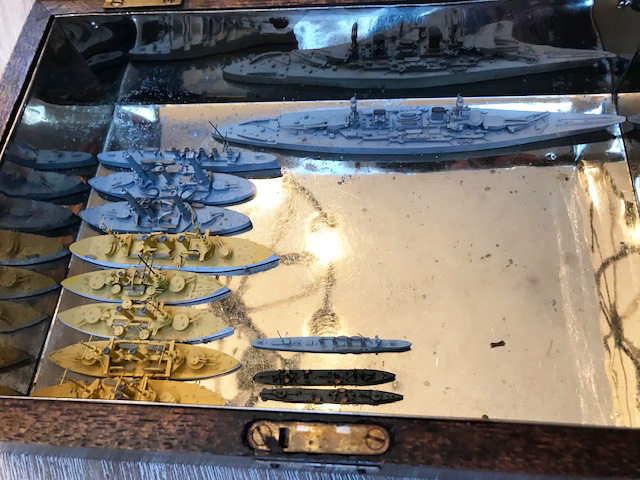 Enfilade 2020 suffered a merciful ending this morning (Thursday.) Yesterday while driving from one son to another son, I received a response to a call I’d made 24 hours prior.  It was the catering manager from the Red Lion, home base of Enfilade. When I asked where we were contractually, with the convention approaching and there being little likelihood of a quick resolution of the coronavirus crisis.  Surprisingly, he suggested the convention could either be rescheduled or cancelled without penalty. After a quickie string of e-mails by the NHMGS board, a decision was taken to cancel the convention.

Though consideration was given to a September postponement, there simply were too many risks from a health standpoint as well as financially.  It is, in my view and from the perspective of attendees, the right decision for this year.  The NHMGS leadership rose to the occasion and acted quickly to bring certainty to a situation that was causing myself and others ulcers. It really was a decisive moment and one that I think will lead to a better NHMGS governing body.

The word was passed along a few weeks ago that Dick Larsen passed away.  Dick, together with some friends was the founding father of the Northwest Historical Miniature Gaming Society nearly 40 years ago. I feel like NHMGS grew out of the ashes of various Puget Sound area game groups, though I don’t know that for a fact.  There was a Western Washington Wargamers (WWW) that included guys a few years older than me, including Larsen, Lyn Bodin, Bill Stewart, Wayne Jacobs and many others.

Dick and I were not close.  There are many others who knew him better than I.  I would say our views on the state of the hobby in the Pacific Northwest, came to diverge over the last 20 years or so. But I think there are many things we share, including a belief in the importance of NHMGS.

Dick was not a waffler.  He believed in the value of historical miniature gaming, and he sought to promote it whenever possible. Dick believed the hobby deserved respect for what it was, a collection of enthusiasts who enjoyed pushing lead according to agreed- upon rules that were rooted in an interest in history.  He didn’t believe the hobby had a lot in common with role-playing, or board games or even non-historical miniatures, and that crossing to the dark side was a black mark. “Troll-rollers” was only one of the endearments he would label them with. He also saw the challenge in making historical miniatures successfully function in a multi-genre setting like Dragonflight.

In the early 80’s Dick began promoting all-historical-miniatures-gatherings in places like the Seattle city park at Camp Long.  These brought dozens of gamers from the Puget Sound area, the Vancouver B.C, area and points south to Portland. It is at these events, when I was still in my twenties, where I met guys who would be my friends for all of my adult life.

In promoting these events, Dick persuaded gamers like me that we weren’t limited to playing WRG 6th edition ancients in our basements or at game stores.  There was a bigger world of gaming out there, we could celebrate our ridiculously wonderful hobby with those that shared our interest, who we could learn from, whether it was a new set of rules or a new painting technique.  It opened an entirely new world to me and to others, and I will never forget it.

I always had the sense it was a real struggle to promote these gatherings. Meeting spaces were few and far between.  They could be costly at a time when many of us were raising families and could afford to pay little. We weren’t officially non-profit and couldn’t use that status to our advantage.  We moved from Camp Long, to the Bremerton to the Veterans home at Retsil and any number of other locations for an annual meeting.

Though Dick passed leadership on to others like Gary Williams he was still a spiritual leader. He was still capable of leading trends, at least locally, in the hobby.  I remember a year when he cobbled together the first round robin Tactica tournament at our Retsil meeting. It was great.

In 1991 Mike Pierce promoted the idea of a paid convention, modeled on the success of the HMGS conventions.  Dick was on board along four others, including myself. With the success of Enfilade, including some financial support for the first gig from HMGS, Dick was drawn to the politics of HMGS as a national body.  Unfortunately, drama was what was ultimately produced, the national board collapsed, and it felt like Dick suffered from a certain amount disillusionment.

Each year Enfilade seemed to grow, and after some real pain when the convention was forced to move from Fife in 2000, it found its footing in Olympia, our current home. But as Enfilade became more successful and grew to hundreds of attendees, Dick seemed to draw away from the convention.  I believe he felt the attention paid to the convention drew too much energy, resources and interest from what was happening in the shops, basements and local game groups.  It’s why fifteen or so years ago Dick began a winter game gathering that came to be known as Drumbeat.  It has become an incredibly successful single-day affair that is a central event in the NHMGS calendar. Not only that, but I believe it became a model for other events that have proliferated over the past few years, including Fix Bayonets, the events at the Fort Lewis Museum and the Veterans Museum in Centralia.

NHMGS may not be quite the organization Dick imagined 40 years ago when we met at Camp Long and we put our five dollar annual membership in a cigar box. But it is the largest historical miniature gaming organization on the west coast, and perhaps west of the Mississippi river. We are not pure, and we honor those who dabble in miniatures that aren’t recorded in the official histories. But I do truly honor Dick for what he assembled.  We had far more in common than we had differences.  NHMGS has become an incredibly important part of my life and I mean to carry on his legacy. We would be in a far different place without him.

With Enfilade 2020 officially in the can, what will I do with myself. Well, it’s not like I don’t have anything to do.  My suspicion is I have plenty to do.  I intend to take a larger leadership role in the convention in 2021, so I probably will host fewer events than I planned.  But, guess what?  My games for 2021 are going to be ready to go. All I’ll need to do is do some playtesting.

The Ploesti planes are all finished, and honestly I’m pretty pleased.  They each have about five layers of Dullcote on them because they required so much handling during painting.  So please, no smoking around them, it’s likely to cause an explosion.  If I have a disappointment it’s that I just didn’t get enough of the mold mark removed.  Should have spent more time scraping and sanding. 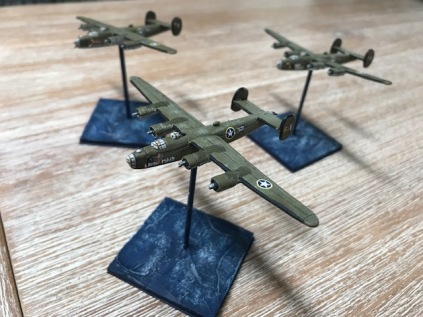 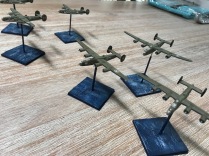 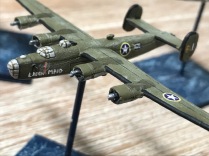 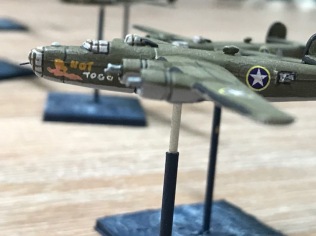 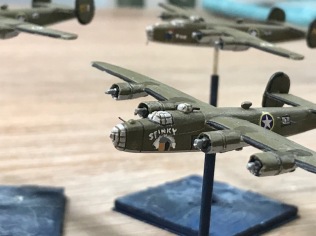 i’ve posted these a few other places.  They aren’t perfect, but I feel like they’re pretty good. Glad they’re done. B-24’s on the way to Ploesti.  No, I’m not painting any casualty markers. Thanks for that idea, though.

Still a few things to finish with the Philippine-American scenario.  I’ve started the last couple Philippine units needed.  There are a couple of buildings that need to be assembled, a little terrain work to do and a few playtests at least.  But the pressure is off, so that work will proceed at a more leisurely pace. I’m looking forward to wrapping up and painting the rest of the figures I have for that project.

That said there is no end to things to work on.  I’ll share them as stuff gets done.

I’m dragging an old nugget off the back burner and into the fire.  I’ve had an interest the last couple of years in seeing the cool ships that Dave Schueler and George Kettler have in a variety of scales.  However, I’m really not interested in duplicating what they already have or buying one more thing to paint.  So I did the only thing I could do and dragged in my 1/1200 ships from the garage, safe inside their super-cool mirrored box, probably a humidor for cigars. 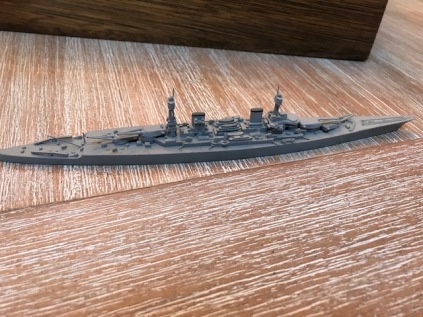 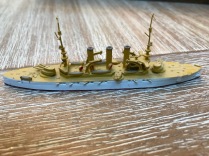 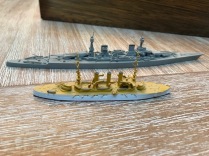 The Delphin USS Lexington 1921 is a classic ship model.  It’s about eight inches long.  The Navis USS Kentucky (1900) is also very nice, but about half the size.

The ships I have are all pre-dreadnaughts except for a very cool Delphin model of the USSS Lexington as a battlecruiser ca. 1921. The rest are Navis models, mostly of the Great White Fleet in their distinctive buff and white colors. I probably bought the ships (I have seven battleships, one cruiser and four destroyers) fifteen years ago before Navis had redone the quality of these ships from really nice to incredibly amazing.  The price went up by at least 50% as the models were re-released.  So, they are pretty spendy.

I’ve decided to build a couple of navies using just pre-dreadnaughts, so 1895-1906, focusing on Americans and Germans.  I’ve already ordered a few more ships including my first Germans.  It will be a slow process, allowing me to order a ship or two per month, and eventually there will be enough to play with.  My friend Tim and Dave Schueler said they might get their feet wet too.

One scenario I’m interested in doing is something loosely based on the Atlantic squadron’s race to Tangiers in 1904 from The Wind and The Lion, and an unfortunate encounter with some German ships in the Med.  Not ready yet but something to shoot for.  One simply can’t say “Mrs. Perdicaris alive, or Raisuli dead!” often enough.

2 comments on “Enfilade, Dick Larsen and What Comes Next”