You’re miniature wargamers.  You know what I’m talking about.  A manufacturer comes out with something new–maybe it’s a period that’s always interested you, maybe it’s an interesting set of rules to go with interesting miniatures, maybe they’re simply the nicest miniatures you’ve ever seen from a period that holds a magnetic attraction on your passions.

I can say, honestly, that I’ve always been attracted by periods and passions and not to figures.  The Hundred Years War, American War of Independence, and a host of other periods have attracted my gaming dollars and the time it takes to paint up a project because I have a deep interest in the period.  Aside-most mainstream interest; War of Independence.  Least mainstream project: Tie between the Lewis and Clark Expedition and The Burr Conspiracy.

About three years ago, at age 61, I was looking around at a last new project.  Let’s just define our terms here, since that often breeds confusion.  By last project, I mean a last new, never begun before new project.  It would mean buying and painting both sides, and all the time that demanded. I was particularly interested in a colonial project.  Osprey had just released Daniel Mersey’s The Men Who Would Be Kings, and I loved Lion Rampant.  Lacking any armies from that period, I was intrigued.

A couple of photos of Old Glory’s volunteers.  State and U.S. Volunteers fought in the Philippine War.  The chief difference between the regulars and the volunteers is that the latter was armed with the 1873 pattern Sprinfield (trapdoor) rifle that fired a black powder cartridge.  Regulars carried the Krag with its distinctive side mount magazine and smokeless cartridges.

My first choice was Egypt and the Sudan.  I was in from Tel-el-Kebir all the way to Omdurman.  The Perrys had a nice range of figures, and I could fill in from other manufacturers, so I was kind of hot to go.  With a conflict lasting from 1882-1898, there would be plenty to keep me busy.

At about this time 1898 Miniaturas appeared on The Miniatures Page.  The photos showed the figures to be truly beautiful, and the announcement that the Spanish company would focus on the Spanish American War AND the Philippine American conflict got my attention.  I decided to follow the range and save my shekels for a future purchase.

At first I was interested in doing both conflicts, but in April of 2018 Lorri and I agreed I would retire after the 2019 school year. That would mean less hobby money along with my reduced income, and I focused instead on the Philippine War. Why?  Well, it seemed more colonial and provoked a real debate in the United States whether our country would join the ranks of other imperialist nations. It had the added benefit of including more state volunteers than U.S. regulars because most of the latter were packed off to Cuba. Those volunteers included an infantry battalion and a battery from Washington state.  I’m such a homer.

I invested some of my summer camp earnings toward the a down payment on the period, and by August of 2018, I had plenty of figures to work for the U.S. invaders and the Philippine defenders.  There were still some holes the 1898 Miniaturas range, but they were still adding some figures.  Last year, they supplemented their excellent collection of infantry with some very nice mounted leaders and an American Gatling gun.

Unfortunately, the death knell of all figure ranges happens when a manufacturer moves on to another range.  The 1898 folks have done exactly that by creating a range of Spanish miniatures for the early 17th century and Thirty Years War period. They’re nice, but not a range I have any intention of doing, and exactly nothing has happened with their colonial range in over a year.

The Tiger mountain gun.  The gun is quite serviceable, and comes with a mule and two crew.  The crew members aren’t great, but the mule is awesome. The rules call for four crew so I added a couple of leftover volunteer officers from Old Glory.

What does that mean?  Well, there are definitely some bits that are missing.  No American volunteers, sailors or marines.  No mounted cavalry for the Americans.  There are still some weapons that would be nice to have-Colt machine guns, light artillery more maneuverable in the jungles and mountains of the Philippines.  Philippine soldiers in American service-the Philippine Scouts and Philippine Constabulary would be valuable units in many scenarios.

This is the Colt machine gun by Tiger in being schlepped formation.  I had an extra Tiger officer to add to the three man crew. I liked these guys.  Big and a little goofy, but not bad at all. 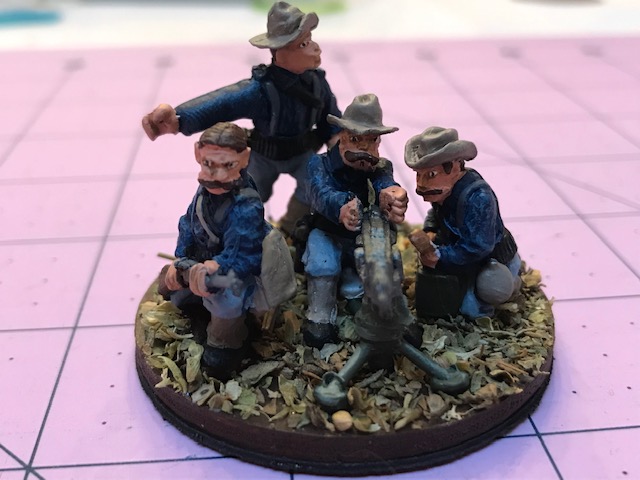 The ready for battle version of the Colt.  Another Tiger miniature.

To be clear, all the miniatures are available.  Old Glory makes all the extra American infantry and cavalry.  Tiger Miniatures has some of the extra weapons bits.  All the figures are very serviceable, but don’t quite match the quality of the Spanish company’s figures.

It’s got to be really hard to sustain a business in this hobby.  Gamers move from game system to game system, and are attracted by new interests and miniature ranges all the time.  A regular customer becomes a former customer easily and predictably. Balancing a company’s offerings with additional and alternatives to attract the maximum number of buyers only makes sense.  But I won’t hide my disappointment that 1898 Miniaturas has not finished what it began.  Yes, the major pieces are there, but there is still plenty to complete the range.

Just in case you’re interested here is what is available for the Spanish American War and Philippine War from 1898 Miniaturas, Old Glory and Tiger Miniatures

*Both Old Glory and Tiger use cavalry interchangeably for Spanish and Cuban rebels.