It’s been a great painting month.  I spent lots of time focused on those Enfilade projects I’m working on.  I’m kind of a procrastinator about most things in my life, but not about getting convention games ready.  I’ll never forget watching some guys painting figures at their table for their weekend-long Battle of Gettysburg game.  That is not me.

I began the month working on figures for the Rebels and Patriots game David Sullivan and I are hosting.  It’s based kind of loosely on the retreat to North Carolina across the Dan River, leading to Guilford Courthouse.  Sort of like Weitzel’s Mill.

Two of the units I wanted to paint were light companies of the Grenadier and Coldstream Guards that are part of the British pursuit. The figures for both units are Front Rank, from their Light Infantry in slouch hat group.  It’s a pretty thin batch of figures, so there’s not a big mix to choose from.  As I’ve stated before, these figures are very fun to paint, very easy to paint because they’re large and kind of blocky.  They remind me of working with a coloring book, because the lines are so clear. No facing colors or lace to speak of.  I did give the officers Scarlet coats instead of the Vallejo Flat Red, so they could be in regulation dress and be better targets for the American riflemen. 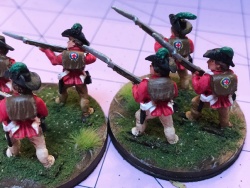 Front Rank Light Infantry in southern dress.  These are painted as the light company for the Coldstream Guards.  Their device is painted on many of the figures’ backpacks in the photo upper left.

Though there’s not a lot to dress them up, I decided to paint their backpacks with crests for each of the different regiments.  The Coldstream Guards were pretty straightforward.  The Grenadier Guards not so much.  Every guardsman was not a recipient, but the majority of figures have their respective crests. 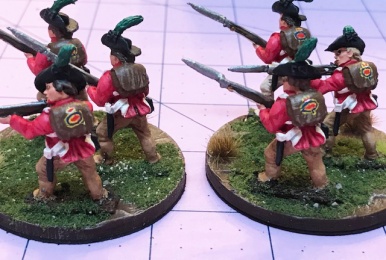 Grenadier Guards light company.  Their devices were more of a challenge to paint and I skipped trying to paint the royal script inside the garter.

I also painted Kirkwood’s Delaware light infantry.  These are Front Rank figures in 1779 regulation dress.  Again, fun to paint.  I didn’t quite get the figure mix right.  Was hoping to add some figures in hunting shirts but didn’t order correctly.  My bad. The biggest distinction for Kirkwood’s troops is the yellow hat lace, so at least I could see them coming.  As their white overalls wore out they resorted to bed ticking for trousers.  I was hoping to have a few more examples of this and remembered what a terrible pain in the ass it was and called two examples good enough.

Robert Kirkwood’s Delaware Regiment was really part of the old Continental Line that served throughout the southern campaign.  It’s the closest Nathaniel Green had to an elite unit, but though it had only 80 or so men.  Kirkwood was a soldier’s soldier, serving through the Revolution, only to die on the Wabash battlefield in 1790.

Back in December I went to the Perry Miniatures site and put together an order for the remaining figures I need for this project–British Legion figures for the loyalist South Carolina Dragoons, Lee’s Legion dragoons, and a handful of riflemen.  Four weeks later, having not received them, I went back and looked at my order, only to discover it tidily sitting in the site’s shopping cart.  Sent in my order the next day, and shipped immediately from the Perry site.  Still waiting, but am watching the mail daily.

While waiting for the Perry’s to arrive I decided to switch gears and begin work on planes for Ploesti.  I don’t have a ton to do but they are big ol’ Scotia B-24D’s.  The models are nice but large, which always poses a bit of a challenge.  The planes often come with their uber-long wings pretzeled and their large stabilizers and double tails needing careful straightening.  I set into this task one evening, only to realize the B-24’s I ordered back in August weren’t the early D version of the bomber that set upon the Romanian oil fields at all, but the later B-24J with the power nose turret.  Still a nice model I can make use of, but it took another order to the UK to retrieve the situation, so I am still awaiting the whims of the Post Office.

This Scotia B-24D is one of ten I acquired from the late Phil Barsdley.  They are spectacular in every regard, including the guns Phil added.  The paint, including “Flying Eightball” emblem and nose art I’ll never be able to equal.

With the R and P figs and the required planes unavailable, I’ve been working on some figures for my Philippine scenario. Because there is a coastal element to the game, I gotta have marines and sailors.  I think I’ve already shared my U.S. Marines.  Like those figures the sailors are offerings from Old Glory.  Not a tough job–because they are in white uniforms with white sailor caps.  Managed to knock out both units this month.  As figures go, they are pretty simple and straight-forward.  they seem a bit small. 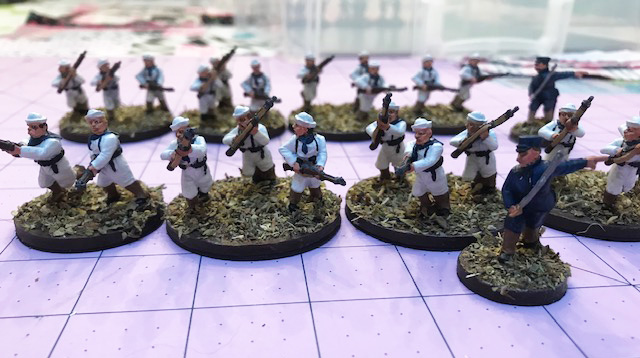 Well, no they aren’t a lot to look at, but if you’re gonna be afloat you gotta have sailors.  Two units of Old Glory Sailors from their Spanish American War range.

They are a pretty simple paint job.  I used Vallejo Grey-White as an undercoat and then painted highlights in straight white.  That’s really all you gotta know.  Simple but reasonably effective.

About the time I thought I could start another unit I got a raging four-day case of the flu.  When I could bring myself to actually go back in my den, I decided to paint some of the heavy weapons I’ll need for the Philippine scenario.  There is a mountain howitzer and crew and a Colt machine gun in both the firing and moving position. I’m about 50% finished with those figures 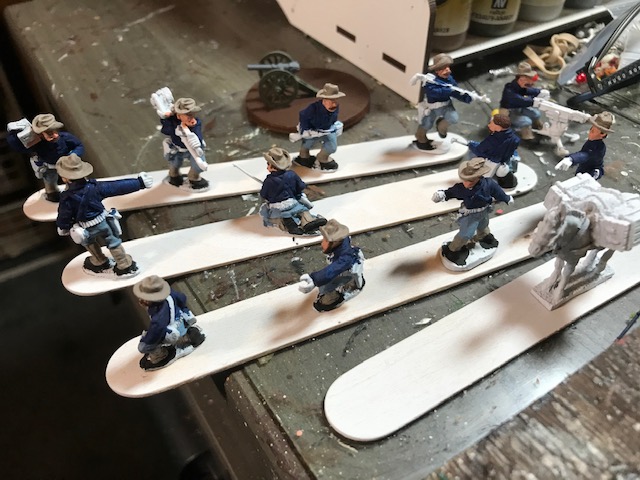 This bunch is from Tiger Miniatures and include crews for Colt Machine guns as well as a breach loading mountain gun from their Spanish American War range. Under construction.  Hope to be done with the lot by February 2nd.

If I’m able to finish those figures by Friday, I’ll have done 72 figures in the month of January, all 28mm, which is a whole lot for me.  And honestly, it was truly enjoyable.  It’s nice to have about three hours a day to paint.  I can get a lot done.

4 comments on “A Productive January”