November is already over, and I can’t believe it.  It was a fun month from a gaming standpoint.  I played in a great Black Powder game over at Jim Sagen’s house, attended the Museum of Flight where Dave Schueler and I ran our convoy game twice–and had a blast, and on Friday I ran the second Buffalo Hunt game with some rule changes and had some more suggested to me.  So, more gaming than my pre-retirement self played.

Some photos from our Museum of Flight game convoy game.  British players chose from a variety of bombers to attack an Italian convoy shepherded by two large Cant 1007Z bombers as well as choices of MC 42 or MC 200 fighters.  In the first game the Brits pretty much had their way, but the second game was much closer, with British losses.  However they did torpedo the tanker in the convoy which exploded.

It was also a pretty productive month on the painting table, though I felt like I tried a whole lot of different stuff and wasted a fair amount of time being fairly aimless. Here is what I accomplished: 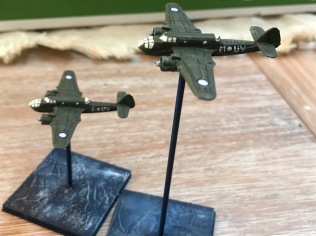 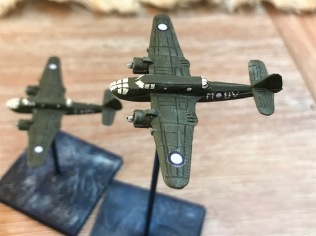 These are Raiden’s splendid Beaufort bombers.  One of my favorite airplane miniatures. Unforunately they don’t make the Aussie version with powered dorsal turret. 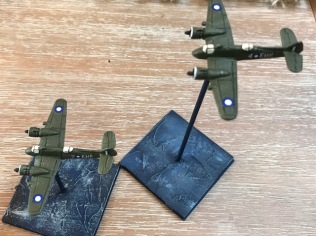 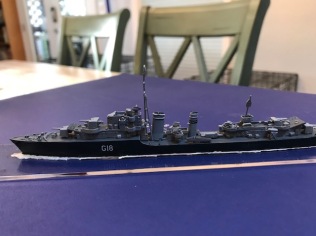 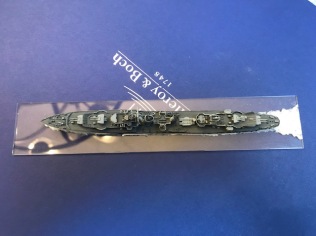 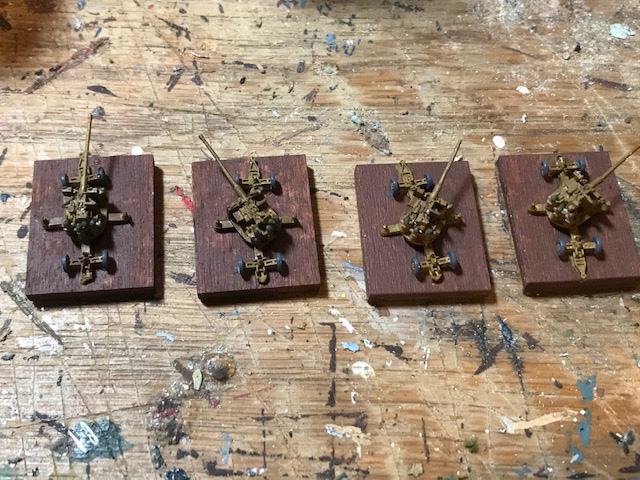 I acquired many, many little boxes of anti-aircraft guns, missiles, transport and radars from George Kettler and the Phil Bardsley estate.  What to do with them?  I’m not sure, but I definitely can’t do anything with them if they aren’t painted.  I’m not sure what these are, but I painted four of ’em and stuck ’em on leftover Litko bases.  It’s a start, but plan to see more of them. Some are clearly WWII  German, others are Soviet and intended for Vietnam.  In either case, pretty easy stuff to paint.

December will be a lot more focused.  I’ll have to have plans made for Enfilade as game registration will open in early January.  More about those plans in my next post, but they involve lots of painting.

On My Painting Table

28mm British Legion-These are Old Glory British Legion.  Not the best figures, but perfectly serviceable. They are a big chunk of the painting I need to do for my AWI Rebels and Patriots game I’ll be working on with David Sullivan.  I like these figures.  Different poses in the saddle, decent detail, and the price is right. Not so large I shouldn’t be able to jam two on a 50mm circular base. I need 18 of them for our scenario.  I actually have 30, but twelve of them will get a fresh re-paint job from a game I ran a decade ago.

1/300 A-4F Skyhawks-George passed on a pile of these to me a while back, and I truly appreciate it.  There were 18 humpy backed Skyhawks and I’ve decided to divide them equally between USMC and USN versions.  These are the later versions of the little attack plane that remained in service all the way through Desert Storm, and certainly fought off the North Vietnamese 1972 offensive. I’ll find something useful for them to do. The miniatures are from Scotia and NavWar/Heroics and Ros.  Decent miniatures. I’ve tried to equip them with ample drop tanks and bomb loads.  They’ll appear in light gull grey and white.

What I’m Listening To 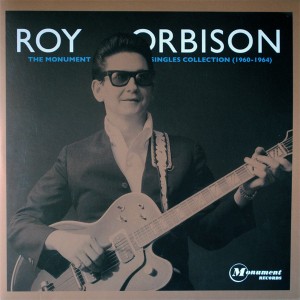 I’ve really enjoyed having the two stereo systems so I can listen to music wherever I am.  Lots of great albums on the turntables, including The Lovin’ Spoonful, The Isley Brothers, The Grateful Dead and The Eagles. But I’ve really had a great time listening to a Roy Orbison anthology-The Monument Singles Collection 1960-1964.  This two LP set issued by Music On Vinyl has mono mixes of all the great Orbison songs from the early 60’s-“Pretty Woman,” “Crying,” “Blue Bayou,” and my favorite “In Dreams” are all there in heart-rending glory with Roy’s absolutely inimitable voice.

Generally not a big fan of anthologies and Orbison has a zillion of them.  But he is also one of those artists who profited from the sale of ’45’s and not so much from LP sales.  This is definitely the best of the lot.