Saturday was  Dave’s Annual Naval Game, or DANG for those who are not Dave aware.  It’s always a lot of fun, scheduled in the week after Christmas.  It’s also the last game gig of the year, and signifies the time is right for this post.

2018 was a great year for a zillion reasons.  I painted a lot of miniatures.  I started two new projects (doh!) I finished a project (yippee!)  My wife and I agreed I should retire at the end of this school year (yeaaaa!!)

Lots of fun in 2018.  I always set goals most of which ending up being fairly pointless.  But one thing I’m super proud of is sticking with my plans to complete my Malta project.  I really want to thank Dave Schueler for suggestions, encouragement and playtests. Doug Hamm sent me a couple of great articles on Malta that shaped my thinking.  Thanks too to all my friends willing to play some AirWar 1940.  Finally I would be remiss if I forgot David Manley for lettin’ us mess with his rules.  They are super.

The Malta project is finished-188 1/300 scale planes EXCEPT for painting some 1/600 scale merchant vessels, i.e. target convoy and escorts.  There will be seven merchant ships and three escorts when it’s all over.  The Malta project will make its appearance at Enfilade.

I also took on the small Flint and Feather project with David Sullivan.  I always envisioned this as a small project.  24 figures.  I might add to them if the early 17th century Dutch types make an appearance.  But I would definitely keep it to ten or fewer figs.  I’ve come to enjoy the Song of Drums and Tomahawks rules.  I also see the value in this entire range of skirmish rules by Ganesha Games.

I also began work on my 1898 Miniaturas figures for the Philippine Insurrection.  I picked up a load of figures in August, and have begun painting, but simply haven’t gotten very far.  Further, my progress has stalled because I’ve fully embraced the Retreat From Concord Project that I’m doing for Enfilade with David Sullivan and Dave Schueler. 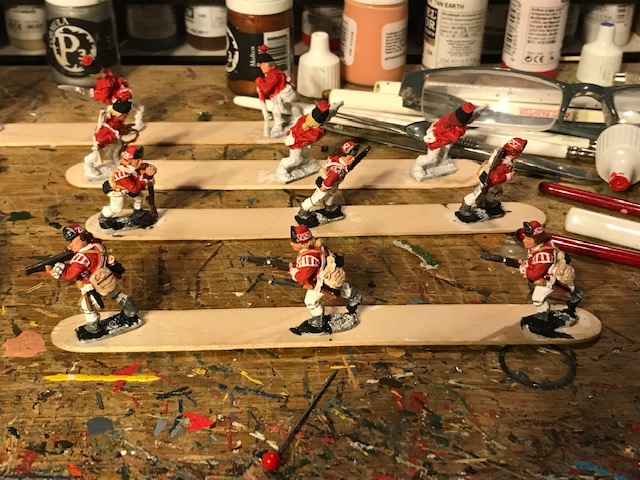 My first unit of British light infantry for Concord.  These are Front Rank figures.  Those in the foreground are Marine light infantry.  Those behind will be 23rd Foot.

That, brings me to Concord.  Dave, David and I met yesterday over lunch to chat about any number of things, but ostensibly to discuss this project.  We made some agreements about a suitable map, and some general agreements about figures.  But we are stuck until the the Rebels and Patriots are released by Osprey later this month. Expect I will continue focused on this project until every conceivable figure is painted. I have high expectations for this game, and expect it will be the “last new project.”  Yeah, I know.

We all set goals for the new year.  But 2019 will definitely be different, because I will be jobless after June.  I do plan to work for my student journalism program this summer, but for the most part I will be more in control of my own time.  I have a couple of goals around time and gaming.  One is simply to play more games.  All kinds of games.  I hope to be more involved with the Olympia gamers who play Tuesdays nights, as well as some day games with my fellow retiree George Kettler.   More time during the week means I don’t have to put off lots of chores for the weekends so I may have more availability there.

Unfortunately, retirement also means less income.  I will have income from savings and my pension, but I’m two years ahead of collecting Social Security.  That said, Lorri still has a good job. and even when we’re both retired-still a ways off for the missus- we won’t be broke.  But I’ll have to be more careful with the money I do have, and lavish spending on figures, records, anything really will keep us from doing some of the traveling we hope to do. I still have my monthly allowance I can use as I please and it will allow me to add figures to projects, but keeping from doing anything major that is new.

One goal I have is to keep close track of figures bought versus figures painted.  I don’t have zillions of figures stashed away, but I definitely have some.  So I’m hoping to post each time I finish a unit, and that will help me track progress toward completing some of my figures.

Painting is something I really enjoy, so I do it as often as I can manage.  My goal for 2019 is to finish at least the equivalent of one figure per day, so at least 365 figures (including planes, ships, etc.) 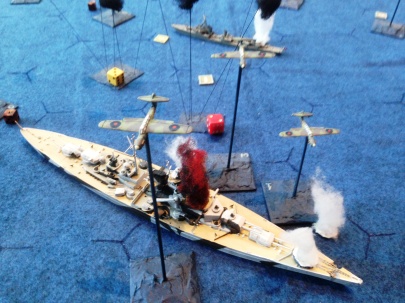 The Tirpitz suffered two hits, one critical. The Germans won a minor victory.

The battleship is wreathed in fire and smoke as the Barracudas recover from their bombing runs.

Our 2013 Tirpitz raid scenario will be rerun at Enfilade 2019.  We’ll use the Airwar 1940 rules instead of Mustangs.  Fewer headaches and more action for everyone.

Already made our plans for Enfilade.  Dave Schueler and I will reprise our Tungsten Raids on the Tirpitz with the Airwar 1940 rules.  We used Mustangs when we ran the game five or so years ago, and this will make it a bit easier on the players. We’re also going to run a Malta game, though I think we’re less clear what that looks like.  The good news is all the planes and ships for these games are complete, so we are ready to go.

David Sullivan and I will run two games.  We’ll run a Flint and Feather game.  Again the figures are done for this, so little needs to be done. We are also doing Concord, and I’m hoping Daveshoe takes an active role in the planning and running of the game.  He’s already offered a workable map, and suggested some valuable scenario ideas.  There’s tonnes of stuff to do for this game, including terrain and lots of figures to paint, so you’ll be hearing a lot, dear reader.

Thanks for reading all this dreck in 2018.  Hopefully I can convince you to stick around for 2019.  Happy New Year.