With lots going on in the world–as I watch my retirement savings dwindle with the stock market collapse-it is also the first day of my Christmas break.  The district, in its wisdom, has seen fit to give us an extra day of vacation today, December 21st, and I am set to enjoy it.  On my list of to-do’s are dog-walking, some extra walking at South Hill Mall, holiday chores for Lorri and lots of painting.  As much of the latter as I can stand.

My vision for Concord has only gotten more grandiose as time has passed. David and I divided up the British forces.  I’ll take six light companies, which I think will be 36 figures.  I’ve also got six or seven grenadier companies, which will likely be 36 or so figures.  Not bad.  There are 42 companies of American militia at Concord, or therabouts.  That’s a bit more painting, I’m afraid.

I’m beginning to have some serious thoughts about how best to execute this scenario, which is always dangerous.  A lot of it came to me this morning during one of my frequent bouts of insomnia, and I think it might work, but it may just be a case of needing to take more meds.  I’ll need to run it by my colleagues to see what they think, but there will be more to follow.  This is all more complicated, of course, by the fact that the rules we want to use, Rebels and Patriots, isn’t actually available for a month, so I’m shooting in the dark.

Since there isn’t a ton I can do about rules until I have some to actually look at, my Christmas break will have to be about painting. I’ve blocked out a lot figures I’d like to get done.  First on my list are some Front Rank American militia.  These figures will be grouped into 6-figure units and will likely fight as skirmishers according to what we’ve read in beta test accounts of the rules.  I have 24 of them, and have gotten a good start on them. 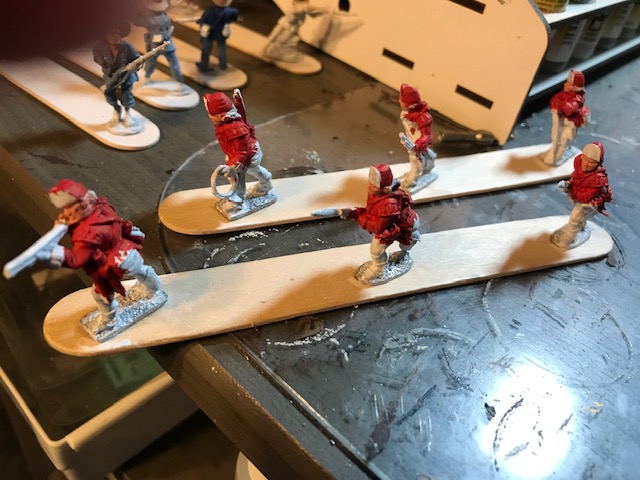 I also hope to get a couple of British companies done.  The first is the light company of the British Marines.  They didn’t receive their royal designation until after the War of Independence.  This is kind of a cool unit with a unique hat and facing plate.  I’ve already gotten a start on them.  The second unit will, for our game, is only a half of a unit, the company of Marine grenadiers. Pretty straightforward-red coat, white facings, square lace.  Life is good.  Not talking about a lot of figures here, just six of each. That brings me up to 36 figures so far that I need to complete during the my Christmas break.

Last, but not least, I began working on a unit of Philippine insurgents about a month ago and stalled out on them.  They sit patiently on my painting talbe waiting to be finished off.  Half of them are in Rayadillo, the rest in white, or blue. Need to knock these guys out.

There is a chance I may wrap all 48 of these guys up with time to spare, and that would be great.  I did receive a significant order from Front Rank this week that should give me all the figures I need for the British at Concord, less a couple of command figures.  Also got a handful of militia types, so I can work on those.

I think I’m gonna watch the two Hellboy movies today and see what I can get done.

2 comments on “The 48 Figures of Christmas”