Last night I sat down, watched a couple of episodes of Netflix’s Last Kingdom, and finished painting the final planes for my Malta project.  They were eight Spitfire V’s.  I’d already painted four of these, and this was the last of them.

Spitfires figure prominently into the final eight months or so of the Malta siege. By this time, most of the attacks on the island fortress were performed by Germans–mostly Ju-88’s accompanied by Me-109’s.  Some of the German fighters are Jabos-bomb carrying fighter bombers attacking British airfields to the west of Valletta, and targets in Valletta itself. Everything is in short supply as German submarines and aircraft slowly strangle the island of its war supplies, including spare parts and fuel.

I really wanted to have fun with these planes.  They are Scotia miniatures and unfortunately lack the large tropical air filters mounted on the Spitfire Vb’s that were Malta-based.  But they are still nice miniatures.

Painting them offered an opportunity to do some different things with color.  I put four in the standard Mediterranean Dark Earth over Middlestone.  Yawn.  I also went with a flash of color with Mediterranean Blue, a striking color, over sky blue. This is not the predominant scheme for Spitfires however, so I only painted two in this fashion.

The U.S. Navy delivered 94 Spitfires to Malta.  They flew them off the decks of the U.S. carrier Wasp to land on Maltese air fields.  While shipped on the Wasp, it is suggested the Spitfires received their blue paint job.  American Intermediate Blue, standard color for the Navy F4F Wildcat fighter was sprayed over the Spitfires’ Dark Earth/Middlestone dressing creating a middling gray over blue gray effect.  So I went with that.  I gave a Vallejo dark grey blue base, and then mixed in some black for the darker pattern. I’m not sure if it’s quite right, but I can live with it. 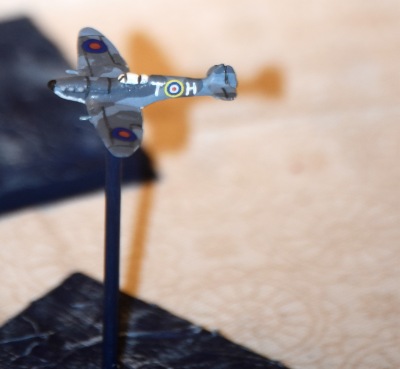 My dozen Spitfire Mark Vb’s, by Scotia Miniatures.  Wing roundels by I-94 Enterprises.  Fuselage markings by Dom’s Decals. Lettering by Old Smyth. Remember, each planes is little more than the size of a quarter.  Not bad for an old guy.

Tonight I’ll be applying decals on the planes.  I’ll do wing and fuselage roundels and paint on some white call letters.  Four decals per plane.  I’ll pass on the tail flashes.  The I-94 flashes I have are just too big.  32 decals, that’s it.

The Spitfires are the end of this project.  I really have enjoyed paint through it.  I’ve learned a lot about the period and the planes involved, and I’ve started playing with some of the planes.  There are lots of things I’d like to try, such as convoy raids (but first I need to paint up my ships.)

Here’s what the finished project includes:

No current plans to add to this collection, but I could see it happen with a few odds and ends–reconnaissance seaplanes and adding a few Stukas to the Italians.  Perhaps also filling out the Sparvieros to twelve planes and three more of the large Cant bombers. But no urgency.  I’m ready to move on to Concord.