Still a week to go in the month of September.  It was weird, wild and woolly with the, thankfully, short teacher’s strike, the beginning of the school year, and last week’s always wonderful Fix Bayonets.

It’s really been a wonderful month in terms of getting stuff done.  In fact August and September together were pretty great. In many ways it was about progressing on some old projects, advancing on something current-Malta, always Malta, and preparing for something new-the Philippines.

I’ve been able to paint quite a bit 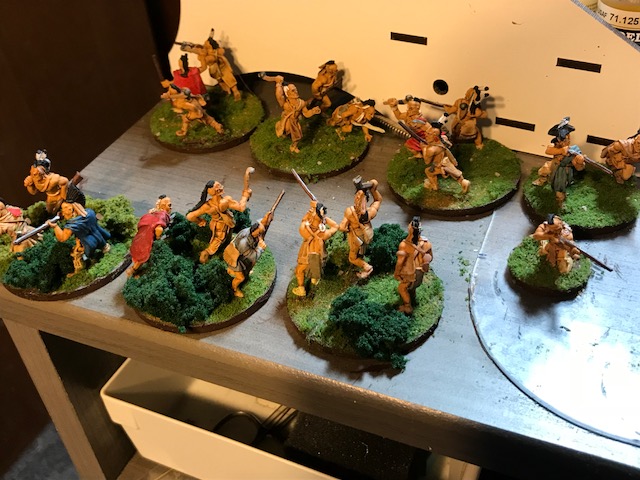 Old Glory Woodland Indians. I’ve had these for many years, and I still have many more to paint. Finished off these guys because they were cluttering up my painting desk, taking up room that could be better used. Finished all their basing tonight.

Right now I have a few more items I hope to wrap up in this final week of the month.  I have six more MC 200 fighters that are about half. done.  Shooting for Wednesday. I also have two big resin BTC ploughed fields.  I like these a lot but they were hidden away in my garage for ages.  I’ve gotten a good start on the, and painted the base colors.  It’s time to move on to details.

These are teeny-tiny MC-200 fighters for my Malta project. They started out as a base Luftwaffe Camouflage Green, and have since been covered with those Desert Yellow irregular shapes, one at a time. These are nice 1/300 scale miniatures by Scotia Grendel.

Waiting in the wings are the Brigade RAF airfield buildings and Tiger Miniatures Philippine Scouts.  Actually Philippine Constabulary, but I’m using them as the scouts, with American officers.  Can’t wait to get started 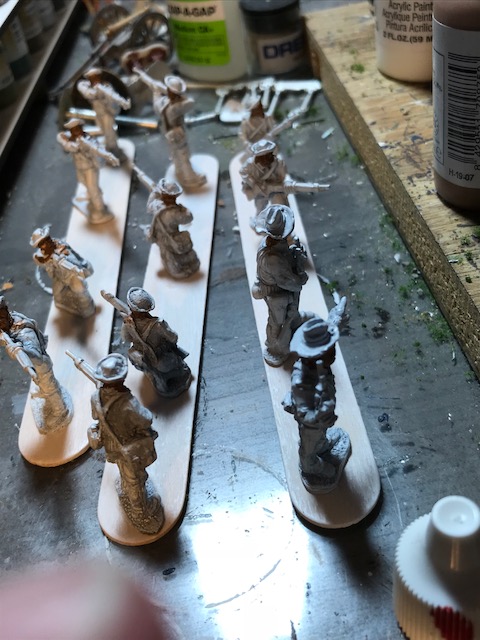 Tiger Philippine Constabulary figures. They are kinda big. They’re primed and ready to go. An undercoat for their faces is as far as I’ve gotten, but I expect to be a lot farther by the end of the week.

With the Mariners season winding down (sigh) there will be more time for listening to music.  I’ve fired up one of my favorite records recently, just for fun. Polydor re-mastered and re-pressed the 1971 Rolling Stones classic Sticky Fingers a few years ago, and it is simply a terrific record.  The album is riddled with drug-laden lyrics and blues and country-influenced lyrics.  “Sway” and “Bitch” are my two favorites, but there are no weak tracks.  The music is driven by 22-year old Mick Taylor on lead guitar.  A passing listen will impress you.  A careful one will take your breath away.  After Let It Bleed, this is my favorite Stones record during their most fertile period.

2 comments on “A Terrific September”