From farthest to nearest, Specter, Stag Beetle, and Water Mocassin, race around the course.  Specter would be the sole survivor of various collisions, minings, and a myriad of attacks.

Yesterday was Drumbeat.  It was late this year due to the passing of the Lake City Community Center to the Seattle Parks Department. It was difficult getting scheduled and the cost was given a stiff boost.  Not good for organizations like ours.  Unfortunately the get together got pushed into my ridiculously busy time of year.

Due to a family commitment I was only able to schedule for the morning session.  Dave and I agreed it was important to run one more session of Mad Wet Max before Enfilade. We had five fabulous volunteers and I’m really glad we had the opportunity for one more play-test.

The game was so much different than our earlier game at Meeples.  We had five players, all very nice guys.  Some I knew well, others not so much.  Some had experience racing boats in Thunderboats!, others did not. Rather than give a blow by blow, let me just offer main points

After the game, Dave and I made our way to the Elliot Bay Brewery to debrief.  I tried the Lake City Way IPA, which was tasty but strong. We agreed on a couple of changes and additions.

Overall, however, the players seemed to enjoy the game, and despite our efforts to make it a little easier to get in to, Dave and I are happy with the way things turned out. The only thing we haven’t added are the various “spectators” who are armed and take potshots at the various drivers.  I’m thinking we’ll probably try some of Khurasan’s modern or Zombie ranges.  We don’t need many figures, certainly less than 20 15mm figures.

My wife and I have been in lengthy discussions as the current school year bends toward its inevitable end. We’ve agreed that I will, all things being equal, retire at the end of the 2018-19 school year.  So that’s about a year and a half out.  This is my first semi-official announcment.  I’ll be nearly 64 and have 36 years in the teaching biz. I want to let go before I’m that bitter and cranky old bastard who should have walked out earlier.

What am I working on? 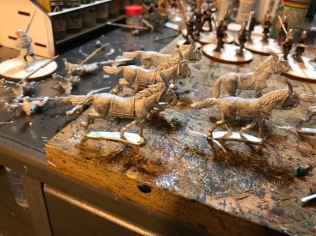 Painted spearmen, left,  Unpainted Guardians armed with flame lances mounted on the horned horses of the Kamarg.  Both from Eureka’s Hawkmoon range.

I’m mixing a couple of different things right now.  I’m working on the Eureka Hawkmoon figs.  I’ve finished the archer figures and am currently mounting a dozen of the spearman figs.  I like the miniatures.  They are pretty expensive for the quality of the figures.  They aren’t bad, but they aren’t brilliant.  At #3.10 a throw for infantry and more than $6.50 for a mounted figure I’d hope they had a tish more detail, something made them more uniquely soldiers of the Kamarg. I suppose Eureka may be viewing them as a limited run and therefore worthy of the cost.

I’m trading off the Hawkmoon project with working on some HYW longbowmen.  I’ll complete 28 of them until I run out of bases. These figures will go toward my dream project of a big battle set of rules for the period that more accurately reflect the unique conditions of the Hundred Years War.  Messed around with something once upon a time, but with retirement in the offing I can afford to dream large.

When I run out of bases, I’ll move on to more aircraft for Malta.  I have plenty.

2 comments on “A Mad Wet Max update and other excitement.”