Back in November I shared my plan to find a new set of air rules to replace the Mustangs rules we’ve played since the past century. I also suggested we’d gotten a leg up from David Manley, author of Airwar C.21. After reading my lament about wishing there was an equivalent version David sent a copy to Dave Schueler who passed them along to me. I read them over and was pretty happy.  They seemed very familiar with some significant differences for the period.  We promised to play them as soon as possible

Looking down the throat of Valetta’s harbor. We used the 2D Topside Miniatures as targets for the bombers. Game mat is by Tiny Mats in the UK.

As soon as possible always signifies a nebulous future.  But yesterday was the big day.  We planned to schlep my Malta stuff up to Meeples and try an initial game. I hoped to accomplish a few things:

We got the bombers set up, entering the board from the closed land end of the board.  We grouped them in threes: nine SM-79’s and three Cant Z 1007’s. We mostly followed the auto-bomber suggestions in the rules. 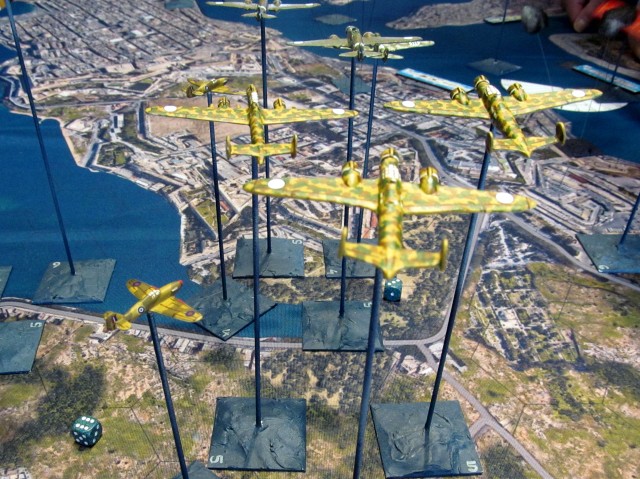 The bomber stream. Photo taken behind the Cant Z 1007’s. One Scotia bomber and a couple whose maker I can’t quite determine. These follow the three groups of SM-79’s

The game moved pretty quickly.  The bombers had a top speed of eight inches per turn, and the Hurricanes had a maximum closing speed of 11 inches. For the most part the ‘Canes could stay engaged throughout without making any special maneuvers.

The British fighters took plenty of shots at the bombers, but with their rifle bullet armament, they had difficulty inflicting a lot of damage before the bombers reached their target.  One SM-79 was shot down by a combination of fighter attacks and flak. Two more were crippled and dropped their bomb loads early.  A few of the fighters suffered nicks and scrapes, but all made it back to their airfields safely after running out of ammunition. Nine of the bombers made it to their targets, each dropping three bombs.  They needed a “0” to hit on a ten-sided die, and we had Henry, a fellow who joined out game roll the hits and damage.  Henry was oh-for 27. 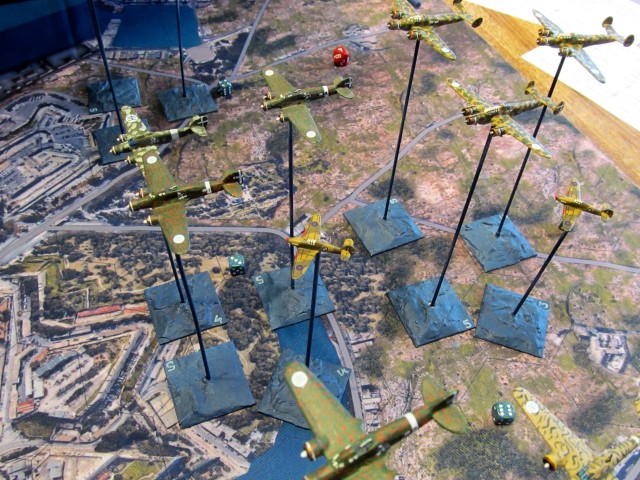 Hurricanes rip into the bomber formation. The Hurricanes are by Raiden Miniatures.

A couple of observations. First, this game was very easy to play and very familiar.  I really liked that.  However, the eight-gun fighters really struggled. All the players (including me, I ran the Fulmars) rolled even average or slightly below, and with the planes rolling so few dice, their chances of doing serious damage was unlikely.  The light/medium .303’s get one die per three guns rounded up.  Heavy machine guns (the Italian bombers) get one die per gun, 20mm cannon (Hurricane IIc’s) get two dice per gun. together with their limited ammunition supply the fighters were between a rock and a hard place.  They could improve their chances by firing extended bursts, but that expended their ammo even more quickly. Really, the Hurricanes could only make four passes before they were done.

Another look as the bombers creep closer to their targets. 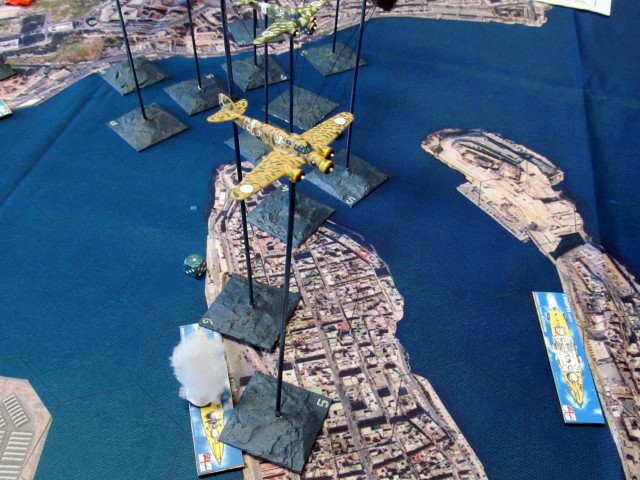 The bombers let go of their bomb loads, roll astonishingly badly and come up empty.

We made the decision to change the flak rules a bit.  The 1940 rules were pretty similar to the jet age rules that target individual planes.  Because the WWII bomber flew in closer formations they would be more likely to suffer from the kind of area fire.  So when the bomber formations encountered flak, each plane would have to roll. Only one plane was actually hit, but the damage could be massive. We’re still messing with this a bit.

Overall, however, I really enjoyed the game and the rules. Admittedly, it was only two dimensional without escorting fighters.  But I thought it was a great first time out, and leaves me anxious for more.  Dave and I will be using Airwar 1940 for our attack on the Illustrious scenario we run at Enfilade.

Thanks to David Manley for trusting us with his rules and giving us the opportunity to try them out.