I’ve gotten a lot done in January.  I finished my six boats for Mad Wet Max, ordered two more and they are currently under construction.  All eight will be ready to go for Drumbeat on March 3rd.  Actually, if all goes as planned they’ll be ready to by this Sunday, but my life is moving into the busy season so we’ll just have to see. 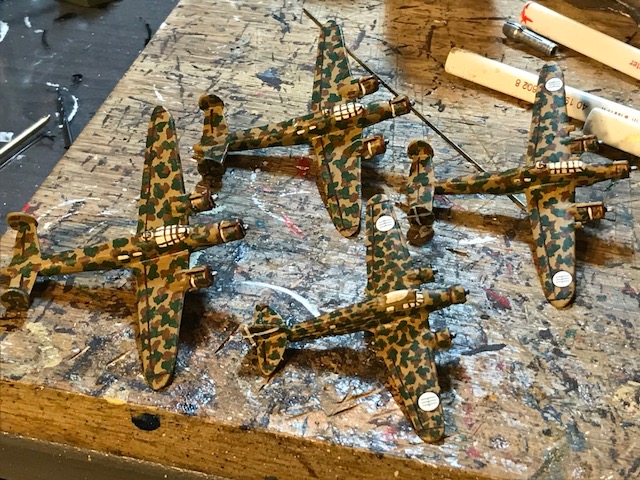 The last of my Italian bombers in the middle of getting markings. The three twin tailed bombers are Cant Z1007s. In the foreground, the smaller bomber is a very nice Scotia SM 79.  They were fun to paint.

I’ve also painted a whole lot of planes for Malta.  The WWII Siege of Malta lasted two years and the air battles over the little island went through seven stages, with different planes being introduced throughout the various phases.  I’ve painted 18 British fighters (Skuas, Fulmars, Hurricane I’s and Hurricane IIc’s,) 12 Italian bombers (SM. 79’s and Cant 1007’s,) 18 Italian fighters (Fiat G.50’s, and Macchi SC 200’s) and 10 German bombers (all Stukas) They were fun to fiddle with, and I need more to be ready for phase 1 and 2.  But later, I’m moving on to something else.

Lion Rampant and Dragon Rampant have really taken off.  I think I have Lion Rampant covered with about 600 painted figures. All they need is remounting.  Ugh.  But lots of guys are playing Dragon Rampant, and I don’t really have such a thing.  That’s a lie, but I can’t make myself paint all my GW Lord of the Rings stuff.  No, I don’t know why, I am just not in that mental space.

I’ve been trying to figure out what I can do to build a small army that would be distinct and could take advantage of the unique fantasy experience Dragon Rampant offers.

Dave bought me some of the Eureka Hawkmoon figures for my birthday.  Really kind of a sampler of what was available.  A couple spearmen, some swordsmen, archers and personality figures.  They are all quite nice  The problem was there weren’t enough interesting nasties to make a good Dragon Rampant.  You have to have at least one monster, spellcaster or something magical or you’re just fighting another medieval army. 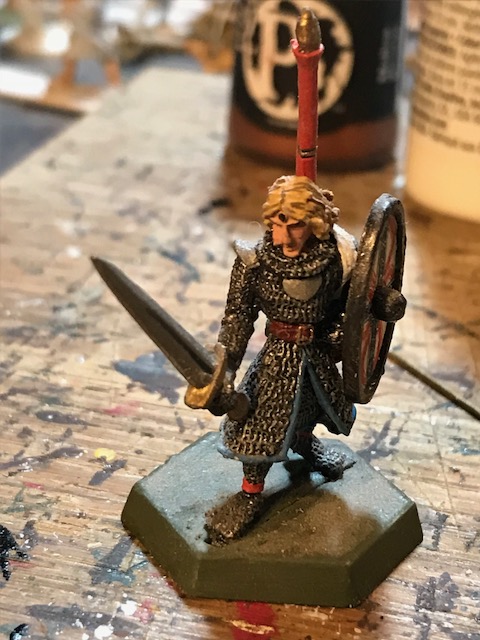 This is NOT a Eureka figure, though I have the Eureka figure of Dorian Hawkmoon.  This is one of Citadel’s Eternal Champion set from the 1980’s.  Hawkmoon with sword, shield and flame lance. The black jewel in his forehead identifies him as the Duke of Koln. I ran across these figures last night as I was scrounging through my lead pile, hoping I might find them.  Alan and Michael Perry contributed to the design of these figures.  Trust me, you can tell.  They’re amazing.

Eureka has released it’s second pile of minis for the Hawkmoon range, including mounted (horse) flame lancers.  A flame lance is sort of a cross between a flame-thrower and a beam weapon. That’s cool. So I’ve ordered enough figures to create an army as follows:

Not a ton of stuff, but it will keep me off the streets for a while.

For those not in the know, Hawkmoon is a hero in Michael Moorcock’s Eternal Champion cycle.  Written in the 60’s and 70’s, I devoured these when I was in my 20’s-the stories of virtually all Moorcock’s protagonists.  Moorcock is described as the anti-Tolkien.  He’s heroes are often less than heroic.  Dorian Hawkmoon is, if anything, probably the most straightforward of Moorcock’s champion, fighting against the forces of Granbretan in a post apocalyptic world.  He serves Count Brass who rules over the Kamarg as the forces of Granbretan savagely conquers the world around them.  Hawmoon goes around the world gathering mystical and mysterious allies arms and delightfully wicked enemies.

Eureka is also making the Granbretan forces too, but I don’t know if I’ll go there.  We’ll see. 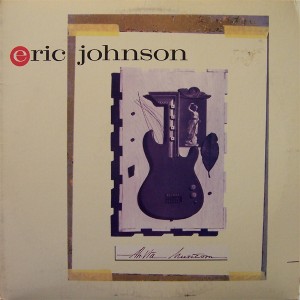 I think I’ve written about my fondness for the music of Texas guitar genius Eric Johnson.  Johnson has been recording since the mid-80’s but is such a perfectionist he turns out new stuff quite rarely.  I would charcterize his style as a jazz-rock fusion with a occasional country themes thrown in because he’s from Texas.

Johnson’s best known album is Ah-Via-Musicom from 1993.  It is just plain really damn good. He is fast, but melodic, and always just interesting. My favorite song, hell everybody’s favorite song is the instrumental “Cliffs of Dover,” which just leaves me shaking my head wondering how he did that. He leavens his pure white heat with some solid, if fairly tame vocals.  “High Landrons,” “Forty Mile Town,” Righteous,” you could name them all, there are no wasted tracks.

Ah Via Musicom was recorded during the death of vinyl, so the an LP was simply not attainable at any price for a very long time. However, today is the day Friday Music re-released the album on vinyl, and my pre-ordered copy was waiting for me when I came home.  If you’ve heard Johnson’s work before and like it, waste no time.  This record is available on-line from Friday Music

But just to put the icing on the cake, as I was browsing the Seattle concert scene during Christmas break, I checked Johnson’s tour schedule.  Lo and behold, he was coming to Seattle tomorrow night at the Triple Door.  Needless to say I’m going.  Yes Virginia, there is a rock god.

One comment on “Next on the docket: Dragon Rampant”