Dave Schueler, Dave Demick, my son Casey and I all met at Meeples today for a playtest of Mad Wet Max. Can’t say we were disappointed.

If you live in Seattle and are looking for a fun, community space to game, I can’t recommend Meeples highly enough.  Love the cafe, and we generally take over a table space for board games or miniature games. We glommed on to a long table about 6′ X 40″, much smaller than the Enfilade table we’ve reserved for the four of us to play on.

A few games of Incan Gold later and after scarffing down some food, we were ready to play the game.  We play MWM on a hex mat.  Our mat has really big hexes.  It was designed for seaplane racing with 1/48th scale planes, so the hexes are about 6′ across. Plenty of room for a boat on a 4″ X 2″ base. However it does provide less space for maneuver and my concern going into the game was that there would be too little.  That turned out not to be a problem. 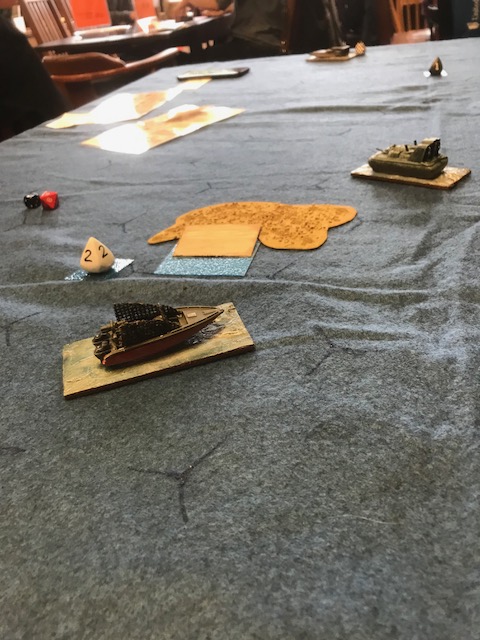 Dave Schueler in Red Scorpion and Dave Demick’s Stag Beetle circle buoy 2 and watch as Casey’s Water Moccasin limps to victory across the table. Alas my Tiger Shark has already slipped beneath the silken waters. The two Daves are separated by a small island with a jump.  The boats are mounted on 2″ X 4″ bases.

Because this game is not simply a circular race course, set up was different.  We set up the board with three numbered buoys plus a buoy representing the finish line. Racers must pass through the hex with each of the numbered buoys three times before crossing the finish line to complete the game.  They may be passed in any order, but no single buoy may be passed consecutively  So for example, a boat may pass buoys 1, 3, 2, but may not pass buoy 2 again without passing a different buoy first. At Enfilade I will have tokens for each of the buoys, and a driver will receive a token each time they pass a buoy that they must display so everyone knows where they are in the race.

Race boats are a bit different than in Thunderboats.  In that game a boat is a boat is a boat, and players spend points on driver quality, re-rolls and strengthening the hull and engines for against risky maneuvers.  In MWM the boats are all armed differently, and can’t be changed.  Every boat starts the game with three hull points  and three engine points.  They receive 16 points to buy the usual Thunderboats stuff, including hull and engine points which WILL be damaged during the course of the game.

We divided the board into sectors, and drivers rolled where they entered the mat.  Seeemed to work well with four.  Might be a bit trickier with eight.  Order of play was also by die roll, because the rules in Thunderboats make the leading boat go first–not the same situation in MWM.

The game turned into quite the scrum, and is hard to describe, except that all drivers quickly tried to line up on a buoy and figure out how to line up on an an enemy .  Casey shot at me on turn one, and I shot as often as I could, however, I didn’t let it distract me from the job of getting to buoys.  The board was cluttered with terrain pieces, including some jumps over shallows a la “Live and Let Die” which kept things a bit interesting.

My boat, Tiger Shark, was the only one with a parascender, a soldier floating on the breeze towed behind my boat.  Parascenders are armed with grenades and mine managed to drop one on Daveshoe’s boat, causing minor hull damage, it was fun.

About an hour into the game, it was clear the players were really starting to figure it out.  The usual Thunderboats stuff of pushing engines and corner to get to the buoys as quickly as possible, with shooting happening incidentally, but not in ways that distracted from player objectives. My last turn I pushed my engine for a 14, ran adjacent to a mine (that’s three rolls to pass), crossed two buoys, made a jump and pushed two corners to make a buoy, all with one hull factor left.  I did great until the last corner push when I had to draw an event card on the die roll, drew a hard bounce, took two points of hull damage and became a sinking obstacle.

That was the turn before Casey, with his stalled engine, made his way across the finish line after passing all three buoys.  It was really fun.  I think all the players passed all three buoys twice and were working their way to the last ticks. Everyone took their shots (shooting happens at the beginning or end of the turn, and each boat can fire one weapon per turn until ammunition runs out.)

Games like this are always aimed at learning about the game system and what if anything needs to change.  That was especially true give the difference between our hex mat and David Manley’s.  We made range changes to reflect this prior to the game.  These seemed to work.  The really nasty weapons in the game weren’t the rockets or parascenders, it was the mines. They affect the hex they are in and all adjacent hexes, and with our sized hexes that’s a lot of space.  Currently there are two boats with a total of four mines in the game.  Plus mortar misses become active mines, and there are four mortar tubes, so a total of eight mines, can be dropped from the six boats currently in service. I will add two more boats and they certainly won’t be mine carriers.  We have enough.

Still lots of risk taking, and lots of fun, and because it’s not linear as Thunderboats! is, many more paths to victory. Hope to try it again in February. Scheduled Mad Wet Max at Enfilade on Friday evening and Sunday morning.  Hope to see some of you there.