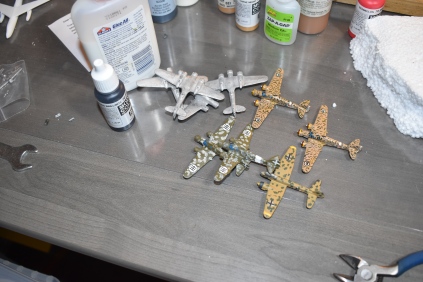 The stuff I’m working on from top left–Indians for the Wabash, about 1/4 done; ten completed Stukas for the Illustrious game; some piles of planes awaiting all kinds of work–Malta-based Hurricane I’s and Macchi 200 Saettas; MSD Vulcan completed and ready to fly across the Atlantic Ocean; nine Italian SM 79 bombers that will take their shot at the Illustrious; four GHG Hurricane IIc’s-nice models.

This year is different.  No new big project.  No gazillions of new painted figures to roll out by Memorial Day weekend.  The pressure is officially off.

That doesn’t mean I won’t be doing anything.  I finished my first six Axis planes for the air attack on the HMS Illustrious.  That’s one of the games Dave Schueler and I will be working on for Enfilade 2018.  I’ve already completed the six Fulmars that will be defending the venerable British aircraft carrier.

These are Raiden Ju-87B miniatures.  They are one part castings.  Very nice stuff, with lots of detail (but not too much.) They are painted a combination of Vallejo German Camouflage Green and Vallejo Military Green.  The underside is Vallejo Sky Blue from their RAF Mediterranean and Desert Air Colors set. I have four more Stukas that I will paint up in Regia Aeronautica colors.  Pretty much green with a white cross on the tail.

Expect lots more planes from the late 1940-1942 period from the Med.  I have a ton.  I need a lot of Italian SM-79 trimotor bombers for the Illustrious attacks.  I have a load of Italian Breda light bombers and early fighters, such as the Fiat GR 50 that I’ve had forever and need painting. I also have British defenders, including some Hurricane IIc and P-40E Kittyhawks that will be in stone and sand colors.  They should be fun.

But my really big project is one that I touched on last post, and that is The Battle of the Wabash. This 1791 battle in the Northwest Territories (okay, Indiana) was a horrendous massacre of the American army sent out by the Washington administration to conquer the territories for settlers then congregating on the north bank of the Ohio River.  It didn’t turn out well.  It is often known as St. Clair’s Defeat or St. Clair’s Disaster. The 2,000 man force under Arthur St. Clair’s command lost about 900 or so killed, compared to about 275 of Custer’s command at Little Bighorn.

It’s a big ol’, project.  I will use America Rampant, my conversion of The Men Who Would Be King, to this early wilderness period. The Americans have something in the neighborhood of 26 ten figure units.  The Indians, under Little Turtle, have slightly more at 28.  The Americans actually outnumbered the Indian confederation at the battle, but the batches of militia and outposts that were swamped and destroyed at the battle’s outset won’t be represented. There’s lots of fiddling to be done rules-wise, but I’m a long way off from being ready. Lots of terrain to prepare.  That said, this will be my Enfilade 2019 project, so really 18 months out.

I already have eight or so units of Americans painted.  All the American units have ten figures. Two of them are light dragoons, though I believe only one of them is mounted. The Americans also have six cannon, and I have three of them painted.  I believe I am working on native units eight and nine.  All the natives are twelve figure units. I still have lots of unpainted lead, though there will be some additional figures needed to complete the project.

David Sullivan recently posted about his addiction to Daniel Mersey’s projects.  I find myself in concurrence with his views.  They are simply a fun collection of rules. We might be talking past each other in terms of future and ongoing projects, but I do see myself working with David on an ACW version of America Rampant.  We both have zillions of unpainted figures, so I see no reason not to.  I am diverted by that somewhat shinier project at the moment.  But not having the time pressure to get Wabash done instantly means I can also dork around with side painting activities, including some ACW units.

New rules to mess around with

Dave Schueler and I have begun lamenting lack of a fairly simple set of air rules. We love AirWar C21, but they are a set of rules for jets. I bumped into David Manley, the author of AW C21 on Facebook.  We’ve had infrequent contact on The Miniatures Page and elsewhere.  He’s also written Action Stations, Iron and Fire, and other rules that I enjoy. Daveshoe has more contact with David than I.

David mentioned he’d written a set of World War II air rules similar to AW C21 he couldn’t get published.  Eventually he offered to let us be playtesters and sent them as e-mail .pdf’s.  We’ve only begun thumbing throught them, but they seem to offer many of the things we like about the jet age rules–hexless, less sltitude emphasis, relative ease of play and the ability to run many planes. More on our progress in the future.