View out on to the Great Gallery. SR-71 is dead ahead

Sunday marked our 15th year at the Museum of Flight. We hosted seven games and about 35 gamers in what I believe is the best venue anywhere.  I know guys in Houston have gamed on the USS Texas, and that sound cool, and I’m sure there are other great places to game, but this isn’t a one-off, it’s our annual gig, and there simply isn’t anything better than hanging out under the SR-71 on a fall sunny day under the glass roof. 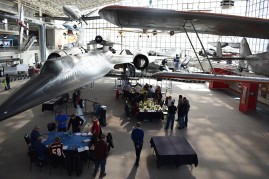 We game under the SR-71. It’s the best game space ever for a small gig like ours.  Not a one-off.  This is where we are EVERY year.

We divide our time into two game sessions. The morning session featured three great games.  They included Rorke’s Drift in 28mm, hosted by Lawrence Bateman and Damond Crump.  Looked good and the players seemed to have a good time.  The Zulus had successfully overrun the hospital and inflicted a fistful of casualties by the time the session ended.

The second game featured All Quiet on the Martian Front hosted by Dale Mickel.  I was drawn to the massive landship in the game. Very cool stuff.  I think the Martians took it in the shorts in this H.G. Wells inspired game.

The Napoleonic sail game was played across both periods and was hosted by Jeroen Koopman. It was great to see Jeroen-it had been many years. Gorgeous, fully rigged 1/700 miniatures by Triton.  Spectacular.

There were also four games in the afternoon.  Unfortunately, my camera ran out of battery life as I was getting ready to take pictures. Sven Lugar ran an old-fashioned Fletcher Pratt naval game on the 12’ X 5’ table.  It was fun to see the golf tees out marking shell splashes as the players guessed ranges. Scott Murphy ran a Star Wars Armada game with lots of players.  Everyone seemed to enjoy themselves.

Dave Schueler and I ran our Falklands game.  Dave developed a great system that required the Argentines compose their attack force of specific plane types, while the British decided how they would dispose of their defenses. There were some off-board issues to resolve, and the Argentines had the worst of luck, losing four of their nine raiders before even getting to the board. To complicate matters, they targeted the amphibious assault ship HMS Fearless, which was the farthest target to reach and left them open to attacks from Harrier defenders. The surviving A-4’s and Mirages that made it on to the table were under constant attack by Sidewinders and cannon fire, but two made it to the Fearless, only to have one stick of bombs end up as duds, and one lose control of their external system just as they were in bombing range.  Not a good day to take back the Malvinas.

We’ve moved the museum day to Sunday.  The Museum of Flight hosts a lot of Saturday evening fundraising activities.  We get to game for free. So if there is a time conflict, we end up low on the priority scale. We’d have to leave by 3:00 to play Saturdays, so we’ve moved to Sunday which allows us to stay until 5:00. Not optimal, but I’ll take what I can get. 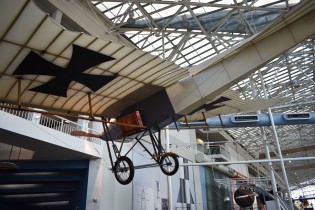 To all my friends on The Miniatures Page who insisted the Etrich Taube was the prettiest plane of WWI, we’re willing to share views of our reproduction with you.  But you have to come to Seattle.

I’ve included shots of the three morning games as well as some additional snaps of what one can see in the Great Gallery.  It’s a small fraction of what’s available to view in the Museum. The Museum of Flight is sponsored by what used to be our hometown manufacturer, Boeing, so lots of Boeing products on display.