August was a tough month.  My house was not my home. The contractors controlled two thirds of the house until September 4th, the day before school started.  The only thing I could do was take care of my shrill, wailing dogs who wanted no part of strange men tramping through their territory.

No games, no painting.  I read a lot, and it’s tough to fuss about that.  Forced to move everything out of my den in order to re-carpet, I made some good use of my dislocation.  Before I moved all my gear back to its home, I examined each and every bit of unpainted stuff, as well as some painted projects.  I put together about a quarter moving box of goodies I could part with and sold cheap at Fix Bayonets.

Hundreds of 28mm ACW figures, many unpainted AWI figs, countless (well, I’m sure not going to count them) unpainted HYW figures all said paint me.  Thoughts of another project-the Sudan, Hawkmoon, other notions were gone.  The fact of the matter is, there are lots of things I’d still like to paint.  Perhaps my American Rampant rules can encourage me to do just that. 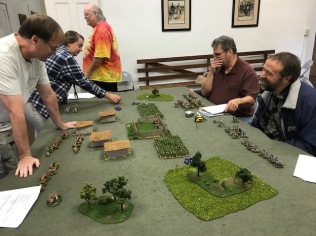 Left: Tom Bieker and Joe Grossman, right prepare to assault the Chickasaw and Spanish run by Scott Murphy, Scott Williams and Jessica Grossman. Joe’s Americans mauled Scott’s troops in the woods and cornfield before turning on the the Chickasaw right flank to win the game. Bill Vanderpool, background left, was a huge help in running the game.

In speaking of America Rampant, I ran a game at Fix Bayonets last Saturday.  It was fun.  Same scenario I ran in July, but I replaced the Spanish mounted infantry with regulars and added more Indians to the mix.  The Chickasaw got off to a booming start, surprising the Americans in near the woods, but decent American die rolls and lousy Indian die rolls stalled out their advance. The Yankees rubbed out Indian forces on the left and rapidly moved to the right, leaving behind troops to begin the destruction of the Chickasaw village. Fun.  Learned some stuff about rules mechanics.

And David Sullivan had this brilliant suggestion about a version for the Civil War.  I loved the idea.  Lots of unpainted figures, looking for a project.  It’s a truly great idea.

With the contractors gone, I’ve been back at the painting table.  Between sharing the Mariners miseries and Ken Burns The Vietnam War, I’ve been able to get stuff done.  I finished the six Fulmars, the Argentine naval Skyhawks, and a half dozen Sea Harriers. on the table right now are some Argentine Air Force A-4’s 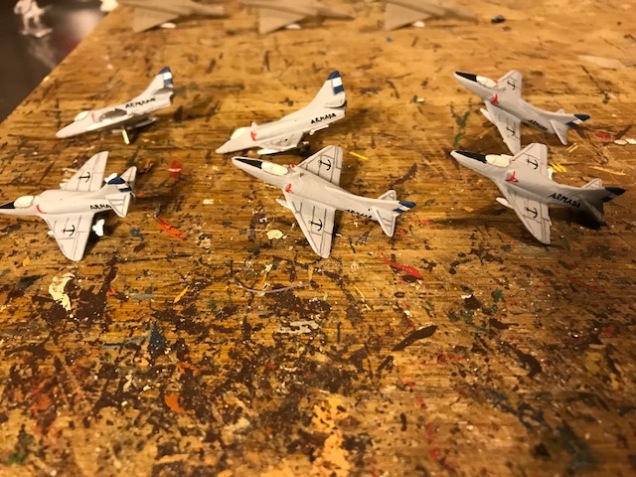 The Air Force version of the little attack planes that inflicted so much damage on the British fleet, are a interesting looking.  There are several paint schemes they appeared in, and I decided to split my half-dozen between two of them.  Three are in the sand and brown paint scheme.  Three are in the off-white and green camouflage.  Both have the turquoise identification flashes to go with the national markings. I’ve now painted about 18 of the Raiden A-4E’s and they are thoroughly enjoyable to work on.  Great stuff.

My completed Falklands forces continue to grow.  The Argie Air Force planes will get me to 12 A-4’s.  I also have six Mirage Daggers to work on.  Then I’ll add some odds and end. I have four more Harrier and four Pucaras to add as reinforcement.  I will also add a few helicopters, which played a big role in the campaign and saw significant action. Sea Kings, Lynx, and a couple of Chinooks. All in all, about 45 aircraft.  Dave Schueler is dusting off his ship models.  We hope to run something at the Museum of Flight in October.

When the Falklands project is finished, I’m going to remount the Aztecs and Spanish.  It’s a big project and I’m hoping I can be done by the end of October.  I’ll paint some too.  Probably a few planes.  I’ve got some Blackburn Skuas I want to paint, along with some F-101 Voodoos, the big Cold War interceptors.  Armed with Genie nuclear missiles, they were intended to destroy Soviet bomber formations.  Don’t quite know what I’ll do with them, but I feel the same need I have for Howlin’ Wolf records.

2 comments on “A moment of introspection, and moving on”