Yep, the convention is less than three weeks away, and I’ve been pretty unproductive the last few weeks. It’s not that I have two hundred figures to paint or anything silly like that, but I definitely have some things to get done for the 13 Days Gets Hot! game, the Cuban Missile Crisis air strike Dave Schueler and I have conjured up.

It’s an air game.  You know what that means.  Planes, a game mat, air stuff.  But no.  I really want lots of fiddly ground eye candy.  Yes, I know, with apologies to George, it will all be out of scale, but hopefully it will at least look cool.  We’ll be using David Manley’s Air War C.21 for our rules.

Still lots to pull together, but I had a super day today working on the various bits. Here is what I still have left to do: 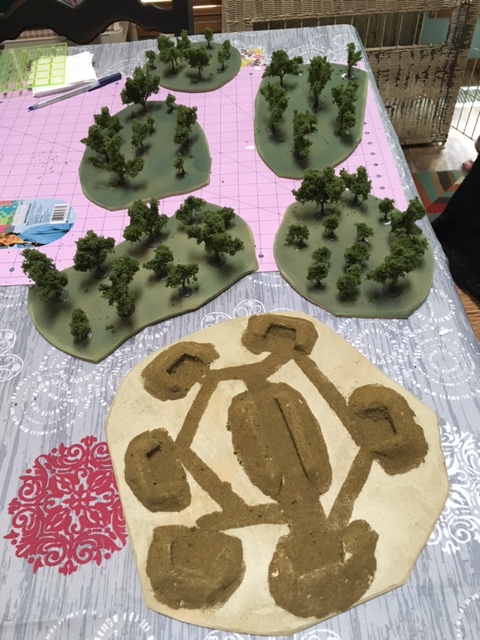 I cut some bases out of birch plywood and mdf I had laying around and decided to make some relatively small, very movable forest around as a backdrop for my Cuba game.  We’re playing on a 5′ X 8′ board, and the illusion of a relatively significant forest needs to cover about two thirds of the table. It also needs to be easily pushed out of the way.

I cut my basing material into odd shapes using my scroll saw. I used my disc sander to bevel the edges a bit, then I sprayed them with I have a couple of the Woodland Scenics packs of trees and I set about assembling them.  I like to use the coarse turf for foliage rather than clump foliage for the trees.  I’ll use the clumps for other ground cover.

After the trees are glued down, I try to generously glue Woodland Scenics turf to the base.  I use the brown turf stuff around the base of the trees and then the green fine stuff around the rest.  Then I give it a good shot of clear matte to hold it all in place.

So far the biggest challenge has been to find boxes suitable to haul these around it.  Flat Amazon boxes seem to be the best answer at the present time. 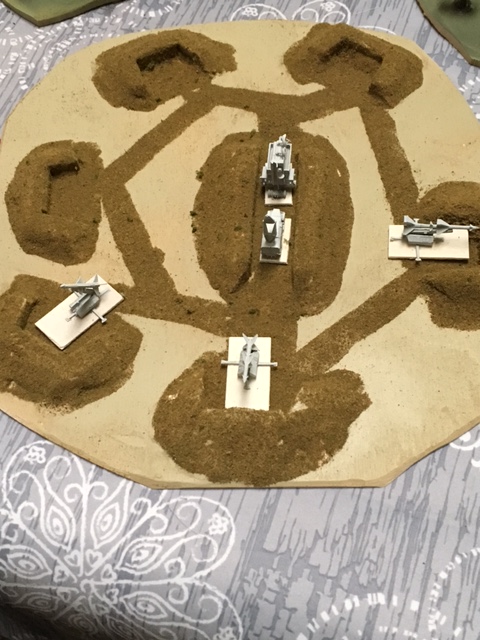 I decided early on an Enfilade air game needed a little eye-candy.  Dave and I did air game galore.  We’ve built ships, and added all kinds of ground targets.  SAM 2’s played an important role in Cuba, chiefly for shooting down a U-2, but there were several sites that protected the MRBM and IRBM sites.

C in C miniatures makes a really nice SAM 2, as well as the accompanying Fansong and Thin Skin radars that directed the missiles.

The tricky part of SAM-2’s is their deployment.  They were in six missile batteries, frequently in revetments, in a star shaped emplacement.  The radars were emplaced in the middle of the star. I decided I had to make a battery.

Problem: making a SAM 2 battery in 1/300 scale will of course be well out-of-scale for our game.  Fight’s On makes a tiny little SAM battery in 1/600 that could serve just as well. But dang it, it will give the Navy something else to do if they are easily enough distracted to forget their mission.

I bought a foot square piece of 3/16″ birch plywood and cut and sanded it into something a little less regular shaped. I created the revetments from heavy spackling compound. This was a slow and frustrating process.  I wanted to get them just right, so I cut some pieces of 3/8″ square dowling to provide some structure.  That helped, but even with careful application and sanding, I wasn’t getting the regular shapes I wanted.  I finally accepted what I had with the rationalization that, yes these were built by engineers whose chief tool was a bulldozer, not landscaping tools.

When I gave up, er, was satisfied with my revetments, I gave them a quick spray of Skeleton Bone by Army painter, just to establish a base color.  Then I started laying down Woodland Scenics turf.  I like to use the Woodland Scenics adhesive, rather than thinned white clue.  It just seems to adhere better. This was process that required some repeating, but eventually it was completed.

When it was complete I assembled and painted the SAM launchers and radars.  I put them on bases for careful storage, and made sure to paint and flock the bases to match the revetments.

I probably put ten hours into the project.  I’m pretty happy with the outcome, given that it’s one of those few made-by-hand activities I do.  This is the finished miniature, complete with missile and radar bits.  I’m going to add some clump foliage in a few places just because this is built on rapidly cleared land, and likely would have some forest flotsam still around, rather than a golf course fairway surface. 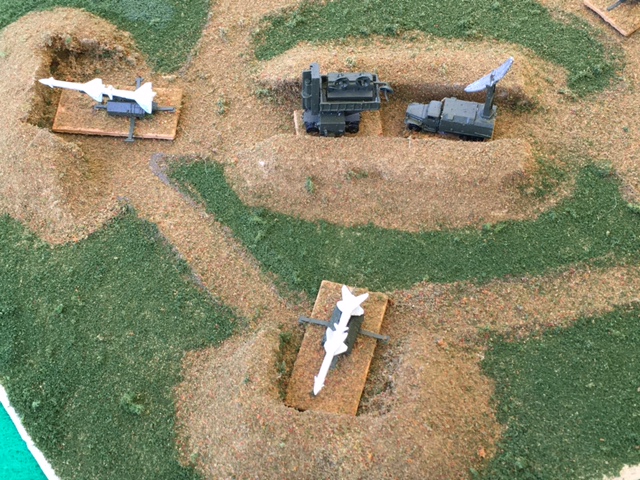 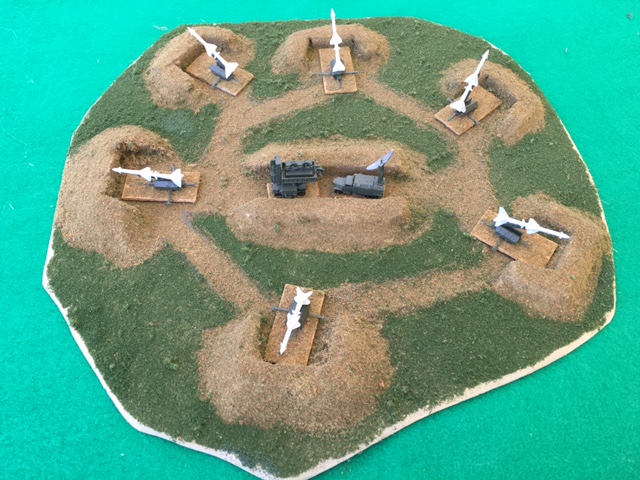