There are times during the school year when my life simply is taken over by forces beyond my control.  Between February 1st and April 15th, it certainly feels like my life is often not my own.  There are newspaper deadlines and yearbook deadlines.  JagWire has its big annual fundraiser with all the bureaucratic hoopjumping and customerservicing that goes with it.  I have to plan for our attendance at the national student journalism convention which involves all the work of getting Congress to pass a law. Add to that, the convention is in Seattle, so I’m somewhat involved in planning and hosting the event and you can see where this is going.

But it’s early Saturday of President’s Day weekend.  I have four days off, and I’m hoping to get a lot of project work done.  Yesterday I sent prints off to our publisher. That’s three consecutive 15 hour days.  Last week I Photoshopped 360+ pics from our Father Daughter Dance fundraiser, and sent them off in over 185 e-mails to some fairly illegible e-mail addresses.  I’ve earned a little down time.

Outpost Tlaxcalan slingers and bowmen.  I like these miniatures.  I have 48 or so of their figures.  They have nice detail, but are a little chunky.  Not quite as good as Eureka, bigger than The Assault Group-but a whole lot easier to work with. a real pleasure.

I’m going to be balancing work between my two big Enfilade projects.  I’ll be continuing work on my Tlaxcalans for my renamed “Foraging Expedition” scenario for Enfilade. I’m now calling it “Craving Corn in Xomilicho.”  It’s been two weeks since our little Drumbeat disappointment.  David and I have messaged each other back and forth, and I hope to do a bit more this weekend.  We’ve agreed on some scenario changes we can work out the next time we get together in March. This weekend, I’m hoping to paint 24 Outpost Tlaxcalan skirmishers and some “mulligan” markers players can use to re-roll one critical die roll for Quetzacoatl Rampant. Pictures Tuesday.

I’ve also begun to work on my second project, my annual doin’s with Dave Schueler.  We’re calling it 13 Days, and it is based on a hypothetical air attack on Cuba during the Cuban Missile Crisis.  I have a really sick fascination with this event.  Mostly it’s based on an admiration for Kennedy and Kruschev, and that they somehow managed to avoid incinerating both countries, when so many others were urging them to do exactly that.  Dave and I tinkered with the basis of a simple game at our Museum of Flight gig in November, and now I’m amping up the stakes with some better scenics, and an actual IRBM battery defended by a SAM site and Soviet-built planes. The American forces will have some period U.S.Navy planes-F-8 Crusaders, A-4B Skyhawks, and F3H Demons to make an attack.  Dave is including an option for early F-4B Phantom II’s in the mix as well. 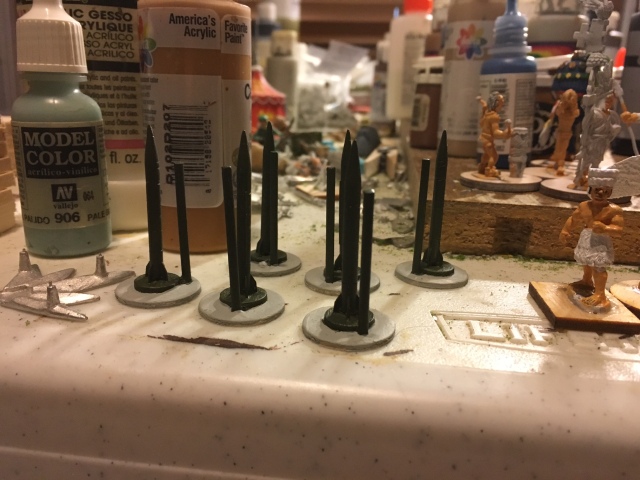 GHQ’s SCUD B’s masquerading as Soviet SS-4’s for my 13 Days project.  Created with bits of dowling and basswood to form the missile launch pads.

In any case, I’ve built some representative missiles, using the GHQ SCUD B miniatures, sans launchers, to put together simple pads to represent the SS-4 Sandals deployed to Cuba in 1962.  The missiles are mounted on some simple basswood rounds for launch pads, on concrete pads as they would have appeared in Cuba. A piece of dowing serves as an erector. It’s a start.  I’ve ordered lots of visual bits from GHQ.  Russian trucks, fuel bowsers, some buildings and tenting. My big challenge is going to be creating the requisite missile bases and defenses as they were dug out of the Cuban jungle.  More as the work gets done.

I’m hoping, with luck, to not only finish the Tlaxcalan slingers, but also at least get started on some of the 18 Soviet fighters-MiG 15’s, 19’s, and 21’s, I bought from I-94 Enterprises, all the excellent Raiden miniatures, for this project.