This is a weird summer.  You know how it is for we teachers.  School’s out by June 10th and then its nothing but sleep, partying, and maybe read a book. Maybe a half day teacher workshop we snooze through. Wrong.  And even wronger for me this summer. Our district didn’t get out of school until June 23rd.  I’ve been to a journalism retreat, attended a three day yearbook camp, and I’m a director of the state journalism camp which is five days, plus all the prep for that camp. In any case, whining over, my summer break has officially begun and for the next couple of weeks I’ll be working around the house and painting a lot of figures.

I’ve actually managed to play a couple of games.

Daveshoe managed to take a weekday off from work, I picked him up, we grabbed lunch at West Seattle’s own Elliot Bay Brewery, and motored off to Meeple’s Games to play Galactic Knights.  I’ve had plenty of miniatures for this space miniatures game for some time, but have never played with them.  I did play a great game of GK at Enfilade in 2015 hosted by Scott Williams and Joe Grossman, but that’s it.  So when Dave suggested a game day, I suggested Galactic Knights. Dave has Terrans and Avarians, while I have Terrans and Entomalians.  So I pitted my Earthers versus his bird types.

The game was very fun, though it was really a walk-through for both of us. The Avarians have some nasty weapons, and point out higher than the Terrans. The Terrans are pretty stalwart, but don’t have much flash. Ideally the T’s want to stay away from the Avarians, but that was hard on our 3′ X 3′ board. Despite a brilliant first turn of die rolling, the Terrans were rapidly closed by the Avarians, who quickly pummeled the Terran cruiser into a wreck.  While the Earthers damaged a destroyer and pursuit ship, the Birds’ rail guns made it pretty tough.  After losing  the cruiser and destroyer leader, I decided discretion was the better part of valor and warped out, leaving the Avarians with their largely undamaged cruiser along with a destroyer.

It was a really enjoyable day with Dave, and I really enjoyed the game.  We agreed we should be able to use surface actions from WWII as models for some pretty interesting scenarios.

The Sword and the Flame on Mars: Canal Wars

For years the Red Captains, those of us in the Puget Sound area with tons of interest, miniatures and models to support our Sword and the Flame on Mars games, have talked about throwing some 28mm ships out on the table to simulate a fight on a canal.  So Friday  we tried it.  Pretty weird mix of vessels. I brought along my three Hundred Years War cogs, and a Lepanto galley for the Martians, as well as my Parhoon Princess for the Brits.  Gene brought along his Safieh gunboat, as well as a 28mm Xebec and a 28mm junk.  Scott contributed his massive Miniature Building Authority steamship.  James had a pair of Reviresco HMS Terror gunboats and the MS Thor, a small cargo ship.

We assigned the Martians all the pre-steam vessels with the exception of the “African Queen” (Scott’s ship) which was in German service.  We played lengthwise on a table 16′ X 5′.  We were kind of playing between two sets of rules–Ironclads and Etherflyer and Sky Galleons of Mars.  The first set of rules is intended for pretty large ships of war and the other for flying ships.  Mostly we were winging it.  I would say it was interesting, but what was clear was that we needed a little more direction. focused on gunboat sized vessels.  So one of my summer game projects is to work on a set of gunboat rules, inspired by the Frank Chadwick games, that addresses the specific requirements of our interests–introducing 28mm scale gunboats  into our mammoth Martian/Venusian interests.

The game itself wasn’t great, but it certainly inspired my interest in getting it right.  Call it a crude playtest. Hope to have something to share with the guys before school starts and we’ve discussed another game at Fix Bayonets in September.

What’s On My Painting Table

In a word, Aztecs. I’ve written a few times about David Sullivan’s Quezacoatl Rampant rules, but now it’s just time to produce. I’ve acquired a goodly number of figures, and am doing my best to motor through them as fast as I can.  Aztecs are not hard to paint.  There is no button lace or facing colors.  However, their units often had “uniform” colors, used standards for signaling, and also had shield patterns. 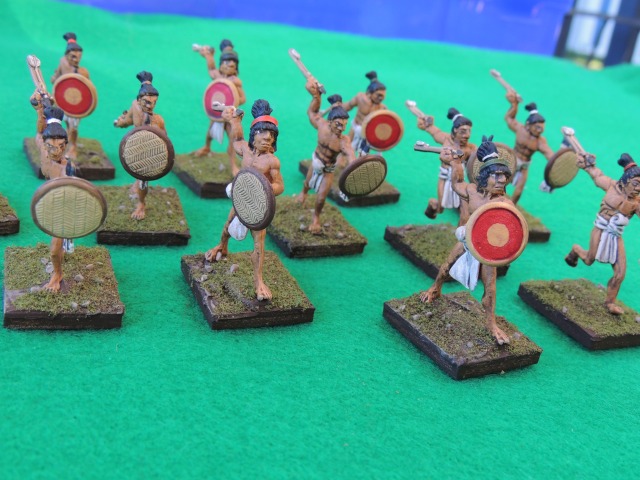 Aztecs with Atl-Atl by Eureka Miniatures.

That said, the units do seem to move right along. I’ve managed to acquire-what I think will be–nine units worth of figures.  They are a mix of miniatures by Eureka and The Assault Group.  I like both miniatures.  The cheapass in me likes the Eureka figures better, but they tend to be a little flat. The TAG figures are nice, but you do pay through the nose for them.

Tequihuiqueh warriors by The Assault Group. Both sets of warriors paint up pretty quickly, but they’re still pretty nice.

I’ve finished two units.  One is a missile unit of atl-atl, basically dart throwers that mostly bounced off of or got stuck in Spanish armor. These are by Eureka figures.  The second unit are lower class Tequihuiqueh warriors.  The latter have a nice shield pattern, but neither unit have a lot going on with them.  I used Vallejo Medium Flesh for the skin tone, and made sure to use the “dip” which did a nice job of accentuating the flesh areas.

I’m unsure how many units I’ll paint.  It may be as few as 12, or as many as 18.  I definitely hope to have at least a dozen for Drumbeat in February.

I’m going through this big musical assessment period at the moment. I mean I’m trying to determine what should be in my collection-because dammit, I’m running out of space. One of the records I identified on my written and mental want list was Slippery When Wet by Bon Jovi.  I know what you’re thinking-Bon Jovi, I’ll never listen to Smyth about another album choice ever.  Yeah, I used to say that about lots of bands.  But I’ve reassessed on Bon Jovi.  He’s good Jersey guy, kind of a hairy Springsteen. He’s been very generous with a lot of good causes, and, while I am usually not very interested in the 80’s hair bands, he’s sort of heavy metal-lite.

And frankly, Slippery is a great record.  The songs are well written, story-telling power pop. “You Give Love a Bad Name,” “Livin’ On a Prayer,” and “Wanted: Dead or Alive,” are all on side one, and I can’t think of a much more fun, chorus driven line up for the opening side of an album.  There are lots more great songs too-“Let it Rock,” “Raise Your Hands,” and “Wild in the Streets” are all solid songs, and honestly there isn’t a stinker on the record. For those who think its a little too pop, I hear that, but it’s also a lot of fun.  Rock and roll is supposed to be fun right?

I searched on Discogs for this one and found it to be a little spendy, but when I ran across it in my local record store for ten bucks, gently used, I snapped it right up.