Though my interest in hydroplane racing  waned by the time I became an adult in the mid-1970’s, Seafair was still an important annual event. By 1975, I moved to California and back and been away from the Northwest racing scene.  When I returned, many of the boats of my youth were long gone–no more Miss Bardahl, the Gale boats were gone, and so was my interest in following the sport.  I lived in the Bay area for five years and my interests were the Giants and A’s, the 49ers and Raiders, and that team that played basketball in the Seattle Center Coliseum–those Sonic guys.

Even so, as Seafair approached each summer, I’d catch the buzz and find a boat to root for.  One boat I never rooted for was Bernie Little’s Miss Budweiser. By the mid 1970’s the Budweiser had gone from something of a joke in the mid 60’s, a regular finisher, but not a winner, and developed into a powerhouse. Little’s gold, and later red hydros went on to dominate the sport for decades, though there would be intervals when a new team seemed to surprise him with a new design or new technology.

I hated the Budweiser team.  They were like Tom Landry’s Dallas Cowboys and George Steinbrenner’s New York Yankees.  They had money, they could build the fastest boats and hire the best drivers, and I hated them for it. Between 1969-2004, a period of 35 years, the Budweiser team won 16 Gold Cups and dominated the APBA high points standing, winning 24 times.

1973 was a big year for the beer boat. Purchased from the the Pay and Pak team, it featured the picklefork hull design, though it had not yet placed the driving compartment in front of the engine, “cab forward,” and it retained the traditional fighter plane tail. It continued with its striking, but familiar color scheme of gold, white and red.  Though it was fast, and was driven by the extremely talented Dean Chenoweth, it would barely lose the APBA high points championship to the radically re-designed Pay n Pak boat, “the Winged Wonder.”

One of Shawn McEvoy’s designs simply is that 1973 Budweiser boat.  Because my knowledge of the 1970-81 period is so limited I’ve had to do a lot of searches for usable boat paint schemes, but when I finally spied the 1973 Bud, it was clear I had to do it whether I like it or not.  And let’s face it, from an aesthetic standpoint, what’s not to like? The gold decking together with the white canopy and engine compartment, together with red and white striping make a striking contrast.

I painted the boat hull Vallejo Old Gold.  The regular gold color was simply too bright, and this is the correct shade.  I also used Vallejo Flat Red for the striping, though I used the somewhat browner Skorne Red by Formula P3 for the red A in the Anheuser Busch logo. I got a bit adventuresome outlining the numbers and lettering on the boat hull.  Always a challenge, but I felt it needed the contrast.

The washer is about quarter sized.  Just to give you an idea of what I’m working with.

I’ve identified the other boats I’m going to do for Enfilade.  They will be Miss Pay n’Pak 1974, Miss Atlas Van Lines 1976, and The KISW radio boat, Miss Rock 1983.  I’m not sure how quickly I’ll get them done, but they are needed for Enfilade, so time’s a wastin’

On my painting table.

Those same six Rohan cavalrymen are staring at me from my painting table.  The horses are done, but I haven’t progressed much since I last posted about them.  I’m hoping to have them finished by my next post. 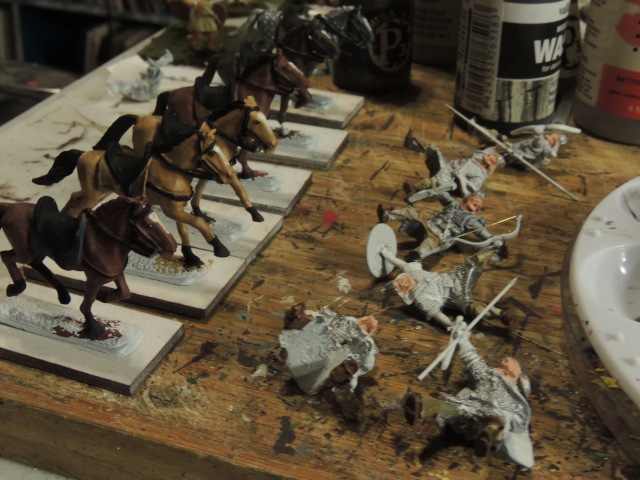 The horsies are done. I just need to get my act together and finish the riders.

Music to paint by

I collect album covers by Hipgnosis, the graphic arts company featuring the photographic art of Storm Torgerson and Aubrey Powell.  They did tons of interesting covers for Led Zeppelin, 10 CC, The Alan Parsons Project, Pink Floyd and a host of less well-known bands.

I picked up a few records cheap by Wishbone Ash, a British rock band featuring many Hipgnosis covers.  I finally got around to listening to Pilgrimage, their 1971 second album.  It was a fascinating record.  Reviewed as progressive rock, I’m not sure I quite agree. It’s more blues-based guitar rock, with a very avant garde feel.

The first song, “Vas Dis” opens with an intensely picked guitar, strong rhythm lines, and a vocal track that basically sings scat.The album is dotted with interesting instrumental pieces.  Really great stuff. Very progressive, with jazz overtones. I have a couple more albums by Wishbone Ash and really need to give them a listen.