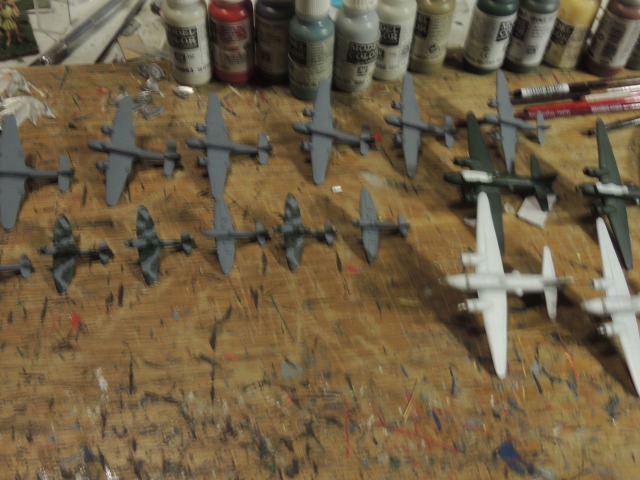 In this some what blurry photo, there are Beaufort torpedo bombers in back with Spitfire Mk.V fighters, both by Raiden.  The Scotia Betty bombers are to the right.  All the planes in the Channel Dash scenario will have the same camo, and begin with Vallejo Neutral Gray with Vallejo Military Green over the top. Phase one has just begun.

Okay, what else do you call a story about painting airplanes?

I’ve finished painting ships and stuff for the Pensacola project.  Still some other stuff to do.  I may buy some buildings and a wharf from Bay, and I definitely need felt and colored acetate for land features.

But for now I’m moving along to the next Enfilade project, The Channel Dash.  My job is to put together the British aircraft, while Dave builds the German fleet.

I have tons of planes–lots more painted than unpainted, though I have a fair number of the latter too. We game in 1/300.  That’s what we started collecting some two decades ago, long before 1/600 or 1/200 became popular.

I have very few planes in the ever popular WWI period.  I think very few translates to exactly two.  They are both Skytrex-a DH 4 bomber and an SE 5a fighter. I’ve kind of stayed away from Wings of War/Wings of Glory.  Played the rules and liked ’em, but it just comes down to you can’t do everything.

But I do have a bunch of planes from World War II and the modern era. I have no idea how many planes I actually have, but it’s likely more than 100 painted planes, but fewer than 150 planes. I’ve painted lots of planes from different nations and different years.  Some I’ve painted because I love certain paint schemes, but most I’ve painted for specific projects.  I have large collections of the Fleet Air Arm for various projects I’ve considered. I have many planes for a potential clash between Taiwanese and Chinese jets from the 1990’s.  I have planes for a potential attack on Cuba in 1962.  I have bunches of Japanese WWII planes.

But for the Channel Dash I need a couple dozen British planes from late 1941.  Sepcifically I need six Spitfire Mk. V’s, six Bristol Beaufort torpedo bombers, six Fairey Swordfish, and four Westland Whirlwinds (yippee!!) This is a representative collection of planes that attacked the German task force that headed up the Channel to the German North Sea ports.

I’ve painted planes from lots of different manufacturers-Scotia, C in C, Ros and Heroics (Navwar), but I haven’t tried any minis from Raiden, manufactured and distributed by  I-94 Enterprises, Dave Winfree’s company out of Chicago. My favorite overall has been Scotia/Collectair, but they’ve been a challenge to get because they are British.  90% of their models are great, some not so good. But I’ve wanted to try Raiden.  A friend of mine, George, has done some design work for them, and he left me some very nice samples. So I decided to use their minis wherever possible.

Almost all the miniatures I need are available from Raiden.  The Spitfires, Beauforts and Whirlwinds are all Raiden planes and manufactured by Winfree’s folks. Unfortunately the only Swordfish available is from ROS.  That has two downsides-1) they have to be ordered from the U.K together with the spendy shipping costs 2) ROS planes are, charitably, inconsistent in quality. Some are good, some not so good, some truly wretched. Because the Swordfish is a biplane torpedo bomber, I’m holding my breath.

I’ve ordered the planes in two waves.  I’ve received the Beauforts and Spitfires already, and they’ll be first on the docket.  These Raiden planes are really nice. The Beauforts are simply lovely with tons of detail on the upper wings and fuselage as well as the bottom part you can’t see.  The Spitfires are likewise nicely detailed, though the tails are inconsistently formed. Both planes come with a nice hole for the brass peg I’ll glue in them:  pre-formed saves some extra hassle.  At the same time I’m working on these British planes I’ll be painting four Japanese Betty bombers from Scotia I’ve had laying around for 15 years or more, so there should be lots to share in the not too distant future.