One of my goals last weekend was to finish the Bay Area Yards Selma.  It didn’t happen, but I did finish it yesterday.

For whatever bizarre reason, the Selma has a special place in my heart. When I was 17, or so, I collected 1/1200 scale WWII ships from Navis, Delphin and Hansa.  Star miniatures offered some 1/1200 scale ACW ships so I bought a handful-having no idea what they were or what I would do with them.  One of the little unpainted lumps was the Selma.

With its distinctive low silhouette and hogging rails, the Selma was a unique gunboat. Originally a coastal packet christened Florida, the steamer had its upper decks removed and painted an overall black. The horizontal railings were built to prevent a phenomenon called “hogging,” when the ship would begin to sag, bending at the ends due to greater weight in the middle of the vessel.  The Selma was armed with one 6.4″ Brooke Rifle forward and three mid-sized navy smoothbores.  Together with the CSS Gaines and CSS Morgan, the Selma escorted the Tennessee, an ironclad ram, out to confront David Farragut’s fleet as it passed Fort Morgan at the entrance to Mobile Bay on August 5, 1864.  Selma, outclassed by the double-end gunboat Metacomet, surrendered to that ship after an hour-long gunfight.

The Selma is one of Bay’s most recent designs and a long-needed addition to those available to gamers and collectors.  It should be easy to take an existing model and dummy up the hogging rails, but I’m such a clumsy doofus when it comes to doing that kind of stuff. The Bay kit comes with a resin hull, nicely cast with no bubbles and little flash.  It comes with the hogging rails, also in resin, a resin pilot house and cabin, a cast metal smokestack, and four of the excellent Bay guns.

As I said, the hull is nice with the paddle wheel housing creating an interesting, but challenging, overhang.  Hard to get at after mounting my ship on a plastic base. The resin hull should be soaked in diluted Pine Sol or at least soap and water to release some of the molding agents left on the model.  I forgot to do this, much to my chagrin, and had some problems with paint, even after priming, not sticking to the kit. I had to go back and hand prime with gesso.  The only problem with assembling the kit was the hogging rails, naturally. They are long and springy resin and run down the length of the ship between the wheel housings. Unfortunately they don’t fit quite right. The verticals for the rails are too short OR it depends on applying pressure to space out the ends of the rails to make it fit properly. After fiddling with that and a tube of CA glue for longer than I wanted to, I decided the hell with it.  I glued ’em on the best I could, just don’t look too closely ’cause there’s a gap between the rail and the decking. The rest went together fine.  I only opted for the pilot house and left off the cabin because I could not find one in any of the illustrations I looked at.

Painting was simple.  Nothing special about the Selma.  I painted the deck Vallejo’s Deck Tan (#110.)  The overall hull I painted Vallejo Neutral Gray (#160) then drybrushed with a light gray from Cermacoat. i painted the pilot house and hogging rails in a Ceramcoat brown-gray, thinking they were newish and possibly temporary structures, and gave the lot a good creosote wash using Vallejo black wash.  No masts, so no rigging.  Could have added supports to the funnel, but didn’t–so shoot me. It’s pretty much an out-of-the-box kit.  I like the look and the amount of detail on the model.  The Selma will join the Confederate fleet in an Enfilade scenario comprising a late-war Confederate attack on the entrance to Pensacola harbor.  More later.

On My Painting Table 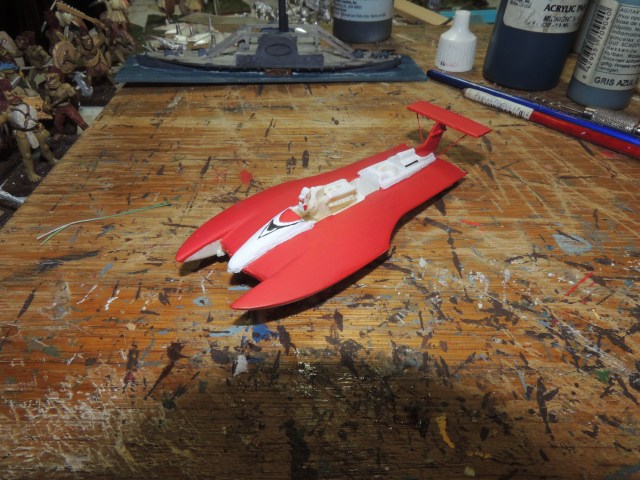 Why the Weisfield’s Jewelers of course.  The 1975 U-74 was a picklefork design and featured a goofy T-shaped tail.  It  was very red with lots of lining on the low profile hull. My model unfortunately doesn’t have a closed engine compartment which would give it a much more streamlined appearance, but I’m happy to work with what I have. The next year the Weisfields became the Olympia Beer boat, and it has a pretty interesting paint scheme.  i may try that next.

Also unseen, but lurking on my table is a pile of French Hundred Years War dismounted men-at-arms by Old Glory.  I definitely need to move on those guys.  I hope to have them primed by the end of the day.