Marshal Clermont tries to coax his shaken mounted men-at-arms across the hedge to attack the English dismounted knights. They don’t seem to want to follow.

As promised, I’ve been tinkering with a set of rules for the Hundred Years War.  I turned to a set of rules I really like, Regimental Fire and Fury and purloined some of their rules engine to help me move this project forward.

There are some basic principles I wanted to incorporate in my big battle rules.

What I hoped to capture with my rules was this idea that English bow fire could be very tough on the French, without masses of stand removal.

I’m not sure I did that.

Yesterday I met Dave Schueler at Game Matrix in Tacoma.  I set up the English behind hedge on top of a hill a la Poitiers with one flank covered by a stream and a marsh.  We played on an 8 X 5 table, which was probably too wide for the number of figures I had.  I ran the English, of course, and Dave ran the French.  He had two units of mounted knights, three units of dismounted knights, a couple of units of crossbows and a unit of town militia, rated as light infantry.

The English had three units of dismounted knights, a unit of Welsh foot, rated as light infantry, four units of longbows and a small unit of Gascon crossbowmen.

Together it represents everything I have painted–I need more.

Dave started his advance to dislodge me from my position, knowing that charging across the hedge line offered a significant tactical advantage.  As Dave advanced, I began firing my longbows from their position on either flank.

The two chief “engines” I used from the Fire and Fury rules were the Maneuver Chart and building of the fire around target quality rather than the shooter. I did change a couple of things.  I did not use the Fresh/Worn/Spent designations, and instead gave a simple -1 for each stand loss on the maneuver chart.  Rather, a unit would be in good order/disorder/shaken based on fire and melee combat results.

Dave had no difficulty moving his fresh units, but in defensive fire, began to suffer disorder from long range fire.  More fire in my movement phase was pretty ineffective, mostly because of bad die rolling.  As Dave advanced, his horse increasingly took a pounding, I seemed to have a few really great die rolls and a bunch of really stinky ones.  But it was enough to shut down the French advance.  Only one of Dave’s dismounted knights made it to the hedge.  It was untargeted by bow fire, but became disordered as it crossed the defended obstacle.  The defenders had a slight advantage and the roll off was also close resulting in a repulse.  At that point the French attack stalled out.

French mounted knights got as far as the hedge before being blasted by Gascon crossbowmen.

Left flank archers staring down advancing French pavisiers. They Paris city militia made it almost to the hedge.

A somewhat blurry view from the right shows the French infantry advancing with support from a crossbow unit.

The results were a bunch of shaken and bloodied French units and the English relatively untouched.  We talked through some changes to the fire table, and I’m thinking about additional fire changes.  I made allowance for an arrow storm rule that wasn’t needed under the current structure of fire, so I need to look at that too. But Dave suggested not making too many changes at once, because it becomes unclear whether the correct problem is being dealt with. But in most respects I feel like I’m on the right track. Movement rates and missile ranges seemed to work. It was an encouraging beginning and I hope to try it again soon. 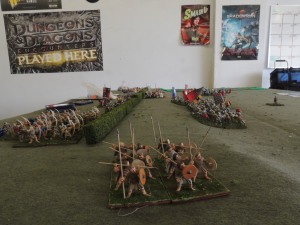 My silly Welshman moving out on the flank are about to be shot full of crossbow bolts. Mostly took this as a look at the battlefield from the flank.