I’m kind of in a leaving my books alone moment.  I haven’t bought any in almost a year, and find myself with plenty to read.  But out on the horizon are some must have Hundred Years War titles.

Before I leap into discussing the books and their importance, let me just offer this warning.  Act fast. These will be limited pressings on small publishers and when they are gone, they’re gone.  Case in point: Edward III and the War at Sea: The English Navy 1327-1377 by Graham Cushway snuck under my radar when it was published in 2011.  But at 200 or so pages, this extremely useful sounding book was probably a lot less than its current $98-$115 price tag.  Don’t miss out because you didn’t act quickly enough.  Both titles are on my Amazon Wish Lists.

The first book that will come out is Henry V’s Navy: The Sea Road to Agincourt and Conquest  There are bajillions of books on Agincourt, fewer on the Conquest, but none focus on Henry V’s naval campaign.  Though there was an active naval campaign throughout the Hundred Years War, simply mounting a new land campaign in France became a gigantic naval undertaking for the English.  By the end of Richard II’s reign in 1399, the English navy, through relentless budget cuts by parliament, ceased to exist.  Learning about English shipbuilding under Henry V, as well as assembling the 1,500 ships necessary to move the English army to Harfleur in 1415 would be fascinating. This book will be released February 1, 2016.

The second book tackles a well-known topic, the Battle of Crecy.  But is it really the battle we think it is. Americans Michael Livingston and Kelly DeVries have edited The Battle of Crecy: A Casebook.  This book will re-examine over 80 contemporary sources from the Battle of Crecy, and most importantly, challenges the traditionally held site of the battle, placing it more than five miles from the currently believed site.  In his biography of Edward III, Richard Barber acknowledged the lack of certainty about the battle site,  This is some serious shit.  It challenges what we know about the topography of the battlefield and how it must have influenced the English defense and how Philip VI must have committed his troops to action.  This book was released earlier this month in England.  It is scheduled for an April 1 2016 release in the States.  Trust me, it will not last long. $101.62 in hardcover, $36.43 in paperback. I’d keep an eye on it too, the release on Amazon doesn’t seem certain.

What’s on Your Painting Table

Baueda’s medieval tent for 28 mm. Try not to look too carefully a the markings. Not my finest moment.

I finished the Miami earlier than planned, so I took on a couple of new tasks.  The first was painting up a Medieval fancy, schmancy tent for my Poitiers army.  It is in colors for Prince Edward at that same battle.  It’s the 28mm offering by Baueda.  The chief colors are Vallejo Vermillion and Vallejo Prussian Blue.  I practically brush my teeth with these colors, I use ’em so much.  The yellow is Vallejo Deep Yellow.  The cover is lined with Purpleheart Red, also by Vallejo.  It wasn’t super hard to paint, or even particularly time consuming, but let’s just say I rushed through the heraldry and am not too happy with the yellow lions. But if you look at it from a distance . . . The miniature is nice, as Baueda stuff tends to be.  I’d like to have three of these for each side.  Of course, if there was a wargaming god of fairness, Baueda would make a 28mm version of their awesome King’s pavilion. I still need to add the Prince’s standard.

I also got my next little project ready to go.  I’ll be painting the

excellent Perry Miniatures version of the Volunteers of Ireland.  This Loyalist unit served in the South in the British army and appeared in a number of “my battles,” including Hobkirk’s Hill and Eutaw Springs.  As you can see, their uniform is unusual with the tall leather cap and the Brandenburg lace.  Haven’t gotten much further than priming and mounting the fellas for painting, but I’ll keep you posted. 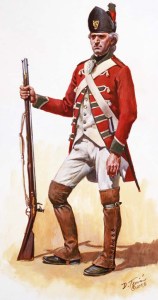 Troiani print of the Volunteers of Ireland

And Now For Your Listening Pleasure

About 15 years ago I picked up a used cd copy of Waiting For Columbus by Little Feat.  I absolutely loved it and have moments when I just blare it from my car or at home.  It’s one of the few records I purchased to duplicate my cd when I ratcheted up my vinyl collection in February.  But dang it, Little Feat just doesn’t sound a lot like that live album.  The songs are the same, but Waiting is just a little over the top, with for focus on the instrumental jams, something that lead singer

If you want to hear a more typical Little Feat record, grab a copy of Sailin’ Shoes. It was their second album, and is a great mix of musical styles-country, blues, folk and rock. My favorite song is a “Tripe Face Boogie” which has a lot of energy and is fun.  But one of the band’s trademark songs, recorded by everybody seemingly, is “Willin.” The rest of the record is very good too, with contributions from George and the rest of the band. A very pleasant listen while painting medieval heraldry.