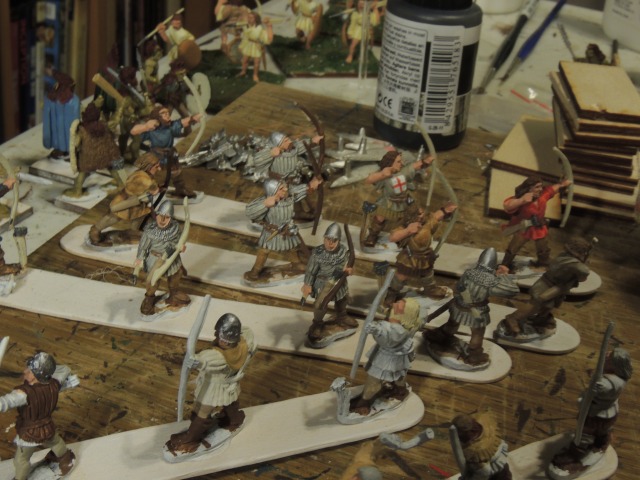 As you can see, my longbow unit is coming along.  The first dozen are done.  I’m working on the final twelve.  I had a pack of later longbowmen I could combine with the early guys, so some jack armor to combine with the gambesons and unarmored, as well as some kettle helmets and even a bascinet. 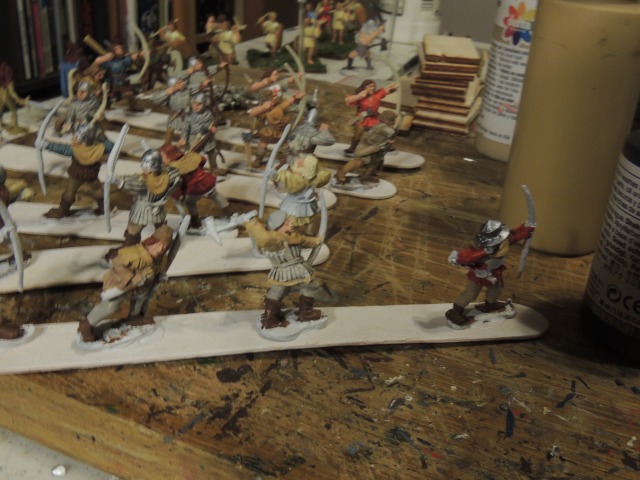 Last night I made a lot of progress on batch two. About to move on to detailing. I hope to have them finished by Sunday.

Mostly I tried to stick with more muted colors–various tans and browns as well as somewhat dull reds and variations on blue-grey. I painted the gambesons, which are essentially a quilted linen or wool jacket stuffed with scrap cloth or horsehair, white and washed them black.  The other clothing colors get a wash of black or brown and often a lightened highlight.  Haven’t quite gotten there with the second batch, but soon.

It probably took five to six hours to paint the first twelve.  I’m about three hours into the second group. I’ve given up trying to paint eyes on these guys.  I think I need a stronger pair of cheaters–and definitely some new brushes if i”m going to attempt that with regularity.  I’m getting a little old to see well enough for it.

Hoping to have these wrapped up by the weekend.  I won’t post again until they are finished and based. I’m eyeing a ship model for my next project–the Bay Area Yards mini of the U.S.S. Miami which should offer some challenges to go with the fun of assembly and painting.

AND NOW FOR YOUR LISTENING PLEASURE

As promised I have a couple of records to share.  It’s been easy to listen because the M’s have lost every game since my last post. 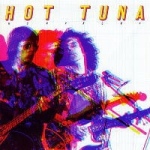 Hot Tuna was Jorma Kaukonen and Jack Casady and supporting musicians.  Kaukonen was lead guitarist and Casady bassist from Jefferson Airplane.  Hot Tuna was their spin off project that actually lasted longer than the Airplane. Hoppkorv, their seventh record from 1976 is probably their first embrace of a mainstream pop sound.  HT’s prior records were filled with extended jams, mostly Kaukonen’s compositions with Casady’s rumbling bass providing the foundation for the guitarist’s extended riffing. Hoppkorv adds keyboards to fill out the sound.  Covers dominate with Kaukonen adding only one of his own songs.  There is a great cover of Buddy Holly’s “It’s So Easy” and another of Chuck Berry’s “Talking ‘Bout You.”  If  the album lacks a great “go-to” track, likewise it doesn’t have any stinkers.  It’s a great record to paint to, uptempo without being obnoxious, ten great well-played songs.

Last night I pulled out my copy of Night and Day by Joe Jackson.  Jackson was in the forefront of the New Wave with 1979’s Look Sharp! But by 1982 he’d taken the edge off and put together something positively Gershwin-like. Short, with only nine songs.  Side A, the “Day” side positively sparkles with MTV hit “Breaking Us In Two.” It follows with intelligent commentary on ’80’s culture.  But the real gem is “Real Men,” a critique of masculinity in the early 80’s.  Side B “Night” I found to be less interesting, with “Chinatown” a genuine stinker.  But the record ends with the magnificent “Stepping Out,” another star of MTV’s early days.  I loved listening to this again, the piano-driven and salsa-laden melodies are quite good, and some of the songs are so great they’ll have you singing out loud.  Good painting music–well it worked for me.