So, it’s been about a month since my last post.  The last time I wrote I was discussing Enfilade.  In that intervening time, I was wrapping up school, finishing the last issue of JagWire and getting ready for my prostate surgery.

Well, all that’s come and gone.  Surgery was last week and pathology report shows I am cancer-free, so that’s good news.  I’m in a recovery mode right now, which means I need lots of rest.  I am physically incapable of playing a game at the moment, though things are in the works to start playing the weekend of  July 19th.

Even so, I’ve been trying to paint a little bit.  Mostly I’m painting for fun.  I’ve got some hydroplanes I’m working  on.  I finished the 1959/60 version of Miss Burien, a local favorite.  It’s denoted by the big swoosh like decor on the tail and the deep red cowing and engine decking.  I also decided to paint myself the Hawaii Kai.  The Kai was one of the very few pink hydroplanes during racing’s Golden Age. I painted one for Dave Demick years ago, but I decided I needed one of my own.  The other boat I have on the painting blocks is the Miss Bardahl from 1968, “The Checkerboard Comet.”  It is in fact painted a creamy yellow with black checks everywhere.  It seems like a really big headache, but I thought I would at least try.  It’s one of Shawn McEvoy’s new hulls.  I think I’m actually going to pencil grid out the design as best I can.  I’ve finished one other boat, a second fantasy hydro, the JagWire, in honor of the school paper and all my students who have worked so hard on it.  It’s in ERHS school colors, with our flag on the hull.  It’s green and black with a jaguar paw on the tail.  I like it.  You may think it’s a bit much. 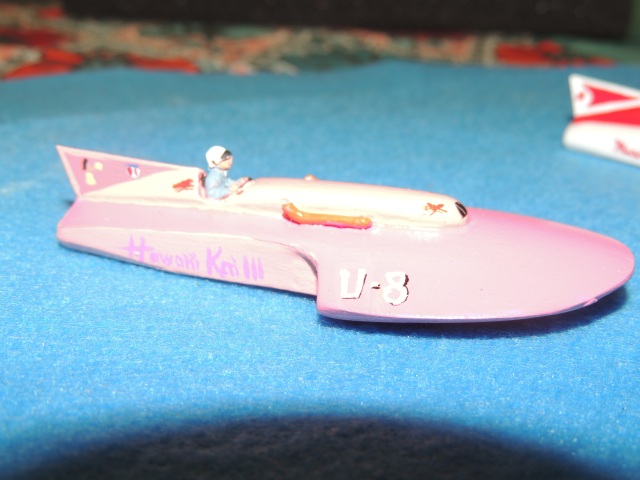 Hawaii Kai was quite a fast boat in the late 1950’s and early 60’s. I painted this for my friend David, but noticed I had no pink boats in my inventory

I painted JagWire for my school and in honor of our paper. I tried to emulate our flag with it’s brackets and Helvetica font.

Miss Burien was a local favorite, though I don’t remember it having a lot of success. This is the 1959/60 version of the boat.

I’m also working on some ACW ships I’ve had for a few years, but really need some paint. I finished painting and rigging an armed sailing sloop.  It may be a Bay model, but it looks kind of Thoroughbredish.  I also have a sailing merchantman by Bay as well as the Confederate river ram, Webb.  From Thoroughbred I’ll be working on the river monitor Neosho, as well as Toby’s truly awesome Benton. They’ll be fun and relatively easy to paint thought I’m hoping to put some rigging touches on all of them.

Pretty sure this little sloop is a Bay Area Yards miniature. I have another three or four ships I plan to paint and rig this month.