The Vosper leads the Campbelltown with the Fairmiles behind. The destroyer and gunboats were packed with commandos.

Never miss an opportunity to paint something pink, I always say.  German Chevauxlegers, Polish Lancers of the Guard, the odd Tiger painted for fuschia for hiding in Norman greenhouses. Cool.

But If you’re really going to go with a pink miniature, make it something in real life that is big.  The flotilla of coastal vessels that made the Raid on St. Nazaire in March 28, 1942 were painted Mountbatten Pink.  Lord Louis Mountatten mixed waterline red with warship gray to produce the color that bears his name.  He believed the grayish mauve tone would hide his ships in periods of dawn and dusk.

Mountbatten pink is available as an actual mixed color from Humbrol.  Alas, I don’t have any local Humbrol suppliers and I don’t use enamels, so I was on my own.

My first challenge was to figure out what this color really looked like.  There are lots of variations from a fairly light grayish pink to an almost off-purple.  I decided to settle for something that was fairly light.  Because I was mixing my own it was important to paint up everything at the same time, lest I should be unable to duplicate the color again.  Well, in this regard I failed.  I managed to do all the Fairmiles together, and they look pretty much the same.  However the Resina miniature of the Campbelltown looks pretty bright along with unique Vosper MTB with foc’sle mounted tubes.  I tried to tone things down a bit with a black wash, but they are still a bit bright. 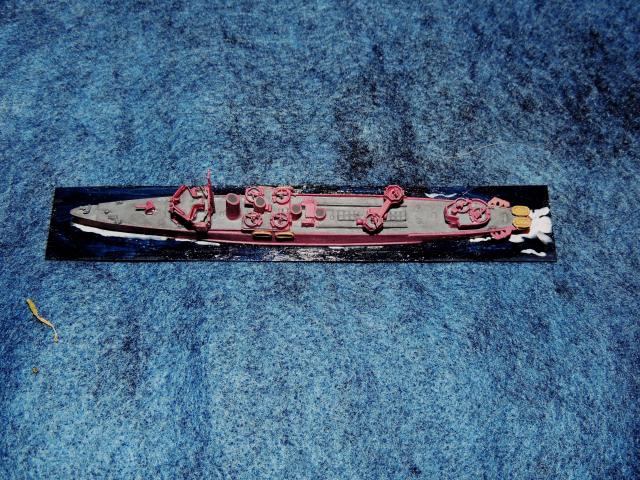 It’s not quite this bright, but definitely a bit pinker than I would like.

The miniatures, Fairmile B’s and the little Vosper are all from PT Dockyard.  This small but unique company is absolutely one of my favorites. Proprietor David Gregory is great to deal with, makes great effort to design new product, and his miniatures are very reasonably priced.  They can be a little challenging to assemble, but if I, a man with hands as deft as crowbars can do it, anybody can.

The Campbelltown was an American lend-leased “flush deck” destroyer. It went through considerable modifications to its superstructure, funnels, and armament for the raid.  The model of the modified ship is available from Resina models.  It was easy to assemble, but a little challenging to paint with all the add-on gun tubs.  Stupid me, I painted the hull and let it sit for two years to finish.  I painted the deck with Vallejo neutral gray, did some blacklining to pick out details and washed the lot with Vallejo black wash.

Now I have to get Daveshoe working with me on a plan for the raid.