Yeow, it’s been a while since my last post.  Mostly it’s because I haven’t had a lot to share, but I have been doing stuff.  Knowing when to post and when not to is always a tough decision to make, but I think it’s important to have something valuable to say.

But I’ve been painting stuff.  I wrapped up the two companies for the Hibernia Regiment from my Louisiana project.  I like them a lot, and they’re fairly easy to paint.  They are RSM figures from the Dayton Painting Consortium, single poses, a unit of fusiliers and a unit of grenadiers.  Unlike most Spanish units they are red, red, red.  Red jackets, red waistcoats, red trousers, red cockades. They have green cuffs but no collars or facings.  Maybe it’s because they are Irish “wild geese.” 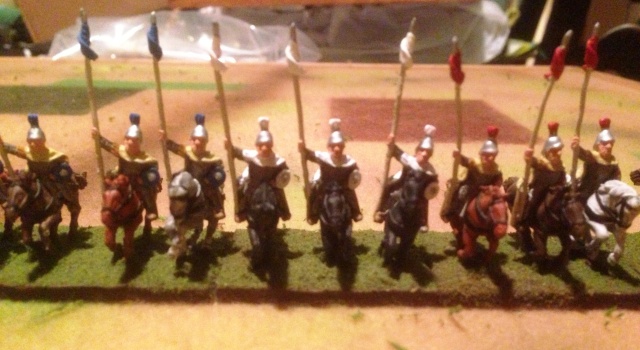 I also dragged out some figures from the distant past-or at least it seems that way.  I used to play a lot of DBA.  It’s a game I still enjoy when I’m playing with the right folks, and the guys who play a lot of DBA in the Puget Sound area are a lot of fun.  One of my favorite ancient armies are the Early Byzantines and I’ve owned them several different times.  My very first ancient army was an Early Byzantine army from strip Minifigs 15mm figures and played with the Milgamex Ancient Warfare rules.  I have the earliest of the Byzantine armies (III 4a for those of you playing at home,) but without enough figures for all the CV options.  I also knew I had all the lance armed heavy cavalry figures festering in my garage for about a decade, so I dragged ’em in the house and painted them.  Nothing special, but that’s 21 Byzantine cavalry figures I know longer have to worry about not painting.

I also have a whole bunch of unpainted 54mm figures.  I began this hobby by painting 54mm figures when I was 12 years old.  Not well mind you, but that’s how I started.  Over the years I’ve accumulated a lot of these figures and even larger pieces I hope to spend some time painting.

The first figure I took on was an Imrie Risley figure of Abraham Lincoln.  IR figures are pretty simple and straightforward, though they can be ill-fitting with arms not quite meeting shoulders properly.  The Lincoln figure is simple and straightforward, and the separate arm holding the stovepipe hat fit well with a little filing. The real challenge was making Lincoln a little interesting.  No fancy uniforms with gold braid or outrageous equipage for the Railsplitter.  He wore black.  His hat was black, his hair was black, so the challenge is to give enough shading so there is some contrast. I used a craft (Delta Cermcoat) black and mixed it with gray for shading, though I probably could have just used a commercial charcoal gray.  Just enough to get a contrast in the large, raised areas and the wrinkles.  I used a gloss varnish on his silk hat and didn’t like it.  I may have to look for a semi-gloss. He was known for his tanned face, so I used the Reaper tanned skin and highlights, which worked well.  Just could not seem to get the large, dark eyes, that are deep set.  Don’t think the miniature has these quite right, and I couldn’t quite pick them out.

My next adventure in 54’s will be the old Monogram miniature of an American Civil War Berdan’s Sharpshooter.  I actually painted this figure once upon a time, when I was 14. Painting the figure was fun, and with little extra to do, was fairly easy and fast.

I’ve managed to make it out to a couple of miniatures games.  I played an evening of DBA at the Game Matrix in early January and hope to make it back soon.  Chris Ewick is hosting the games every Tuesday night.  I’m going to try to get out for weeknight gaming a couple of times per month.  I also made it over to Gig Harbor for one of Bruce’s WWII skirmish games.  It was much fun, and I really enjoyed the game and the company.  My goal is to get out more.  Next scheduled game is a walk through of a pair of War of 1812 games on Saturday the 15th.

One comment on “Hey I have been doing stuff!!!”