An overall glimpse at a portion (the tidy corner) of my painting table. The nearly finished Hibernia Regiment fusiliers, the barely started Grenadiers and the 54mm Abraham Lincoln in the background.

We’re nearly two weeks into the new year, and it feels like time is racing by. Even so, I feel like I’m in one of those creative zones, when I can’t wait to paint in the evening, and on the weekends I can easily put in three or four hours a day. I’m nearly finished with the fusilier company from the Hibernia Regiment, an Irish “wild geese” unit that served in the Spanish army, and periodically made its way to America. They appear quite different from the other Spanish units because of its red coat and yellow tricorne lace. Eleven figures. 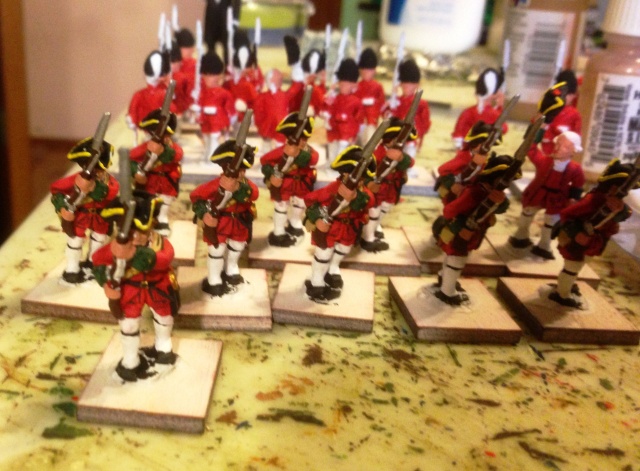 A tighter view of the Hibernia figures front 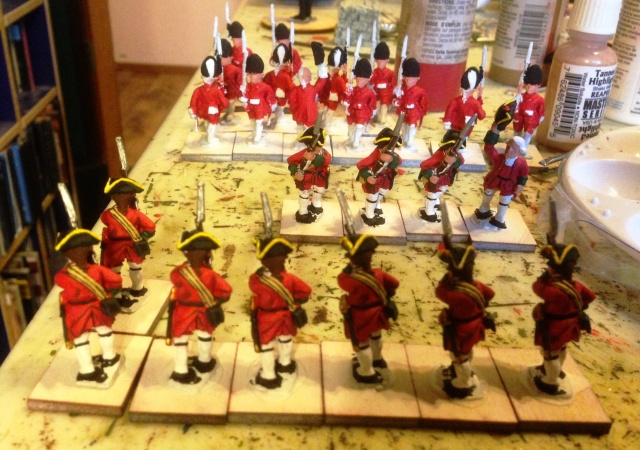 Another view of the Hibernians from the back

I have the Hibernia’s grenadier company next up on the painting docket, and then I’m goind to take a quick little departure from Louisiana. I’m going to paint up the 54mm Imrie Risley figure I’ve had of Abraham Lincoln for some time. I glued him to a base and primed him up. I’ve begun working with the black base coat that will be most of his attire. The challenge is to take this simply dressed figure and somehow make it come to life, either by focusing on his face, or lots of shading and highlighting. I’m not quite sure which route to take.

Imrie Risley’s Abraham Lincoln. I’ve only just begun working on Abe. Expect to see a finished version and more 54’s as the year goes on.

Unfortunately my excellent progress may be a bit stymied for a week as we cruise into deadline. Probably no painting Tuesday, Wednesday and Thursday. Then on Saturday Lorri and I take some time away, board the dogs and spend Saturday and Sunday in the little town of Stevenson down on the Columbia River.

2 comments on “Starting the new year off right”