November 2nd was our annual day at the Museum of Flight.  I have explained many times that this is my favorite venue.  It is a different gaming experience than our other events.  I love the museum with its surrounding planes and the inquiring museum guests.  It somehow makes the hobby seem less isolated from the public, and there is less pressure than managing 300 gamers and 130 games at Enfilade. 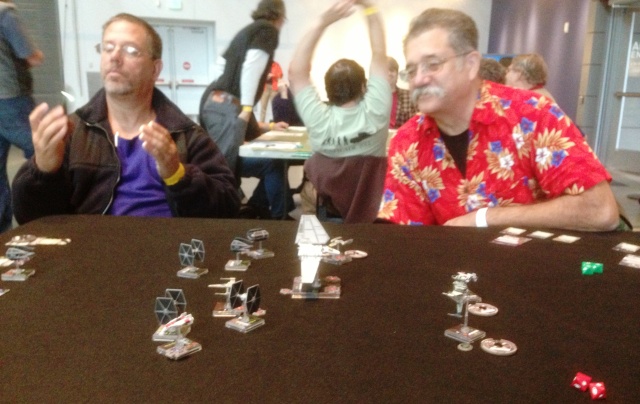 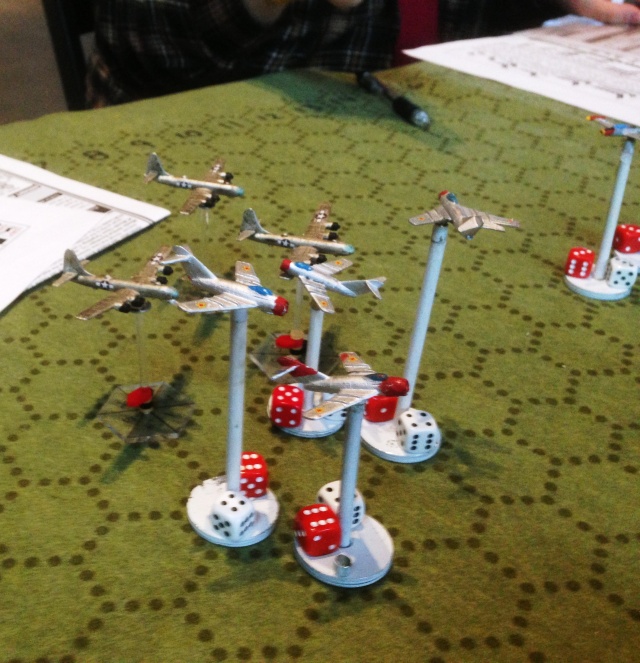 Three weeks ago I got the word there was a glitch at the Museum.  Our normal space in the Great Gallery was only available with strings.  We’d have to end our day early, and because so many members had already committed, I didn’t want to do that. We moved our gathering across the street to the Space Center, so we had a new a new adventure at MoF.

It was actually fairly normal.  The weather was gawdawful–pouring rain and high winds.  That tends to be the case forMoF Saturday. Attendees either read the directions and parked at the Space Center, or gradually drifted over from the main parking lot. We had games for each table in each period,  All were well attended and, as I made my way around the room, it seemed everyone was having a good time. 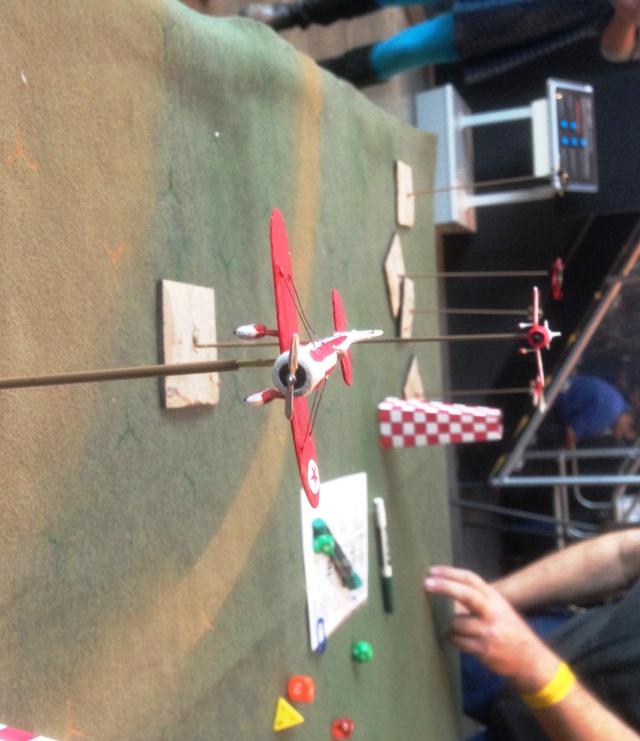 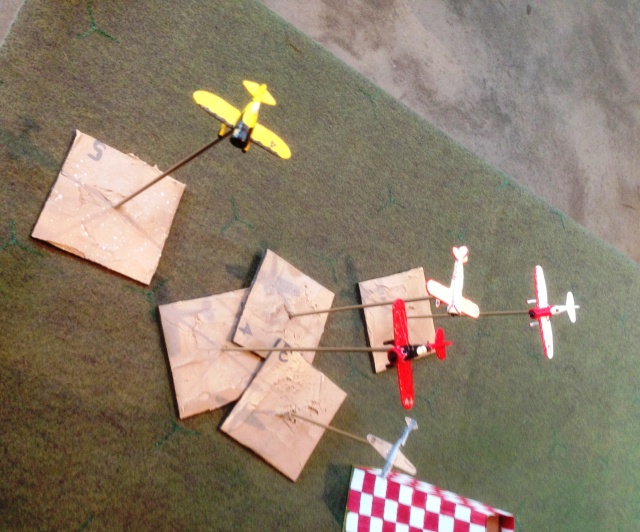 Scrum in turn one. One of many furballs that kept the pack from catching Joe. 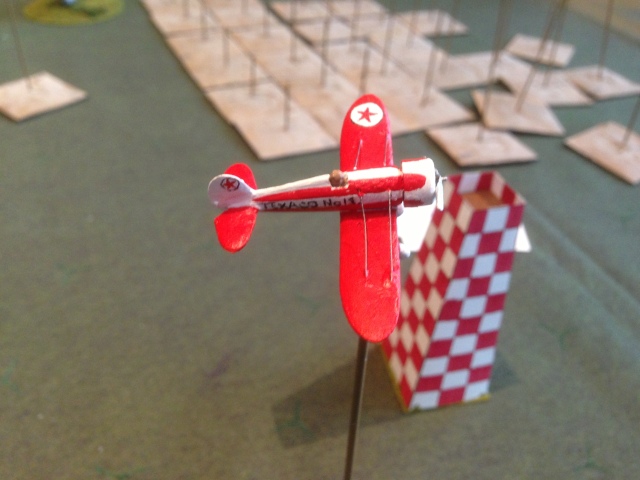 The morning session included our annual air racing game.  This year it was won by Joe Waddington who ran a magnificent race.  Joe, usually a victim of his annual lap two crash, led from the get go in the Travelair Texaco 14, and finished a full half lap ahead of the competition.  Not even close. Paul Grandstaff ran a great looking Check Your Six Korea game featuring MiG-15’s attacking a B-29 raid. Scott Murphy ran an X-Wing Fighter game, and Lloyd Bowler and Dave Mebust ran Wings of War.  The afternoon featured more great games.  Andy Hooper ran an Axis and Allies game based on the air raids on Truk Lagoon.  Scott Williams ran a Galactic Knights game.

Dave Schueler and I reprised our air attack against the Tirpitz.  This time the Germans had a bit more luck as the British failed their navigation rolls, forcing the forcing the attacking Fleet Air Arm planes to come much farther and face much more flak than at Enfilade.  The intercepting fighters were much more effective at engaging the British defending fighters, and even managed to inflict damage on the bombers.  Though the British did score a couple of hits on the Tirpitz, there was only one critical bomb hit and the Germans were awarded the day.  However, it was determined the Tirpitz was too damaged to be moved and would succumb to the Lancaster raids to follow. Paul

Hannah ran DBA all day.  Some great looking games all around. 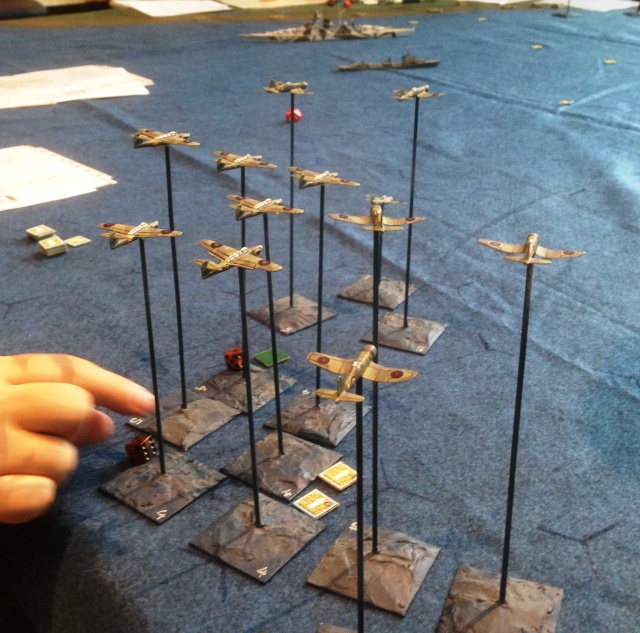 Failing their navigation role, the FAA planes plan their course across the board to hit the Tirpitz 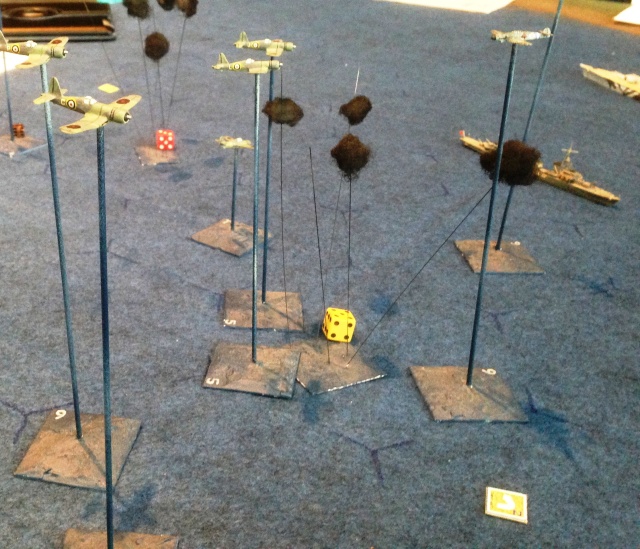 The British attack encountered flak and fighters along the way. The Germans lost two fighters, and the Brits lost a fighter and a bomber before they reached their target. 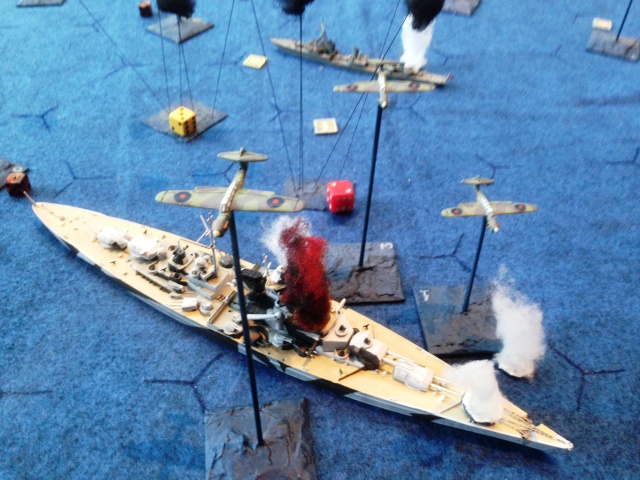 The Tirpitz suffered two hits, one critical. The Germans won a minor victory.

That said, I wouldn’t choose the Space Center again. The floors are concrete and uncomfortable.  It’s darker; players had a hard time seeing the hex grid on my air-racing mat.  We didn’t have quite the walk through traffic and interaction with the museum visitors.  We have a tentative scheduled day with the Museum for Nov. 1st 2014, hopefully in the Great Gallery.  I’ll look forward to returning to our comfort zone under the SR-71.