The 4th Regiment and the 21st Regiment are both blue-faced line infantry units that served at Bladensburg.

Today is the official beginning of school, though I’ve spent a lot of time at Emerald Ridge for the past couple of weeks.  It’s been a busy summer, with a month of solid preparation for J-camp and the week of camp itself, plus the time devoted to painting the house, moving furniture for the re-done flooring and all the silliness that goes with that.

Even so, I made lots of time for painting figures.  My goal was to get the big light infantry battalion finished and at least two of the three line battalions at Bladensburg done.  Voila, I have accomplished that. Below are pictures of the 4th and 21st Regiments, each at 32 figures.

The 4th (Kings) Regiment. Flag is from Warflags. Staff is a North Star 200mm lance with the cords snatched from the Victrix standard bearer.

They are the two of four units created with Victrix figures for the battle.  I am working on the third, the 44th Regiment, also with 32 figures.  A smaller unit, a converged light infantry unit will follow.  The lights aren’t assembled yet, which I am sure will take most of an evening to do.

Just a final critique of the Victrix figs, and then I’ll shuddup about them already.  Basing them is not a pleasure.  I tried to arrange them on their little 40mm square piece of heaven so that they’d resemble a firing line, sort of.  Unfortunately, getting the firing figures to shoot sort of directly forward is impossible, so they are all facing about 22 degrees to their right, as though they were firing at a stag running directly across their front.  The bases, on pretty sizable rectangles, often have to be twisted a bit in order to get everyone moving in sort of the same direction.  The whole lot seems pretty disorganized for a well trained unit. Chalk it up to lessons learned. 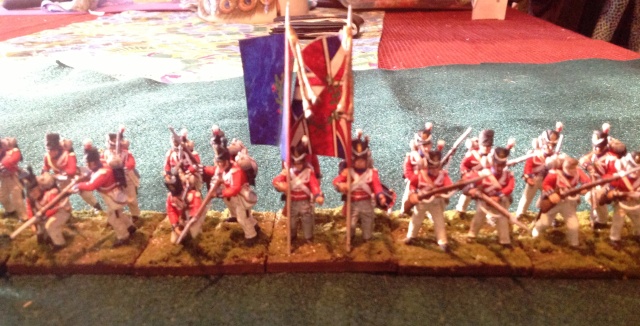 21st (Royal North British Fusiliers) Regiment. Had a difficult time with the lighting, which makes it see a bit like the lights of heaven are shining.

So I have two more British units to finish for the battle, and then one remaining unit, an American line infantry unit of 24 figures to complete for the battle.  After that it’s a few British generals and I want to re-do my rocket batteries before taking the winter to playtest a few times.  I’m shooting for no later than Thanksgiving to have the lot finished, perhaps much earlier.

One comment on “The Bladensburg Report: Three down, three to go”