I’ve made a big deal of not falling into the gamer’s trap of amassing huge quantities of new minis to decorate my considerable pile of unpainted lead. I am not holier than thou, trust me,I have lots of unpainted miniatures. Thousands for sure. But I’ve made some rules for myself-no new projects, and buy ’em as you need ’em. My goal is to paint 400-600 28mm figures per year. Sometimes I’m successful and sometimes I’m not. My ultimate desire is to slowly reduce the number of figures I have stockpiled.

This summer I’ve failed. Yes, I’ve continued to paint. I’m still immersed in my Victrix nightmare, but making slow and steady progress. However, sometime in May, my common sense rapidly fled the reservation.

I’ve made several sizable figure purchases this summer. The first came in May when I purchased some of the very nice IRA range of miniatures from Musketeer Miniatures. I bought about 40 or so figures plus a beautiful Lancia armored lorry. I got all the different IRA minis, plus some of the Royal Irish Constabulary figures.

Though it is fairly fiddly, the Lancia Lorry by Musketeer Miniatures is a thing of beauty. 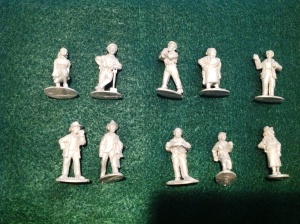 Musketeer offers a couple of nice packs of civilians for this range included in it’s Uncivil War line.

The Musketeer IRA range is very nice. The IRA with Shotguns figures are fairly fragile and I managed to break off a barrel. The figures aren’t cheap, so that’s a disappointment.

When we knew Lorri was receiving a sizable severance package, she passed on a few bucks to me. One of the projects I’m really interested in broadening (once I’m finished with Bladensburg and escape my Victrix hell,) is giving attention to my hypothetical War With Spain 1797-1807. To that end, I picked up about 80 figures from the Dayton Painting Consortium. These are nicely proportioned miniatures, maybe a tish small by today’s standard. I picked up musketeers and grenadiers, as well as a unit of dragoons to balance out my growing numbers of American troops.

Though they’re hardly state of the art, this range of Spanish figures by Dayton Painting Consortium are very serviceable and highly paint-worthy.

After I worked at summer camp, as I do each summer, I invested some of my stipend in miniatures. I made two orders, one to the Warstore, the other to Old Glory 25’s. in the spring the Perry Brothers released the Loyalist Volunteers of Ireland for their AWI range. The VOI have a distinctive uniform with their funky bearskin headwear and their oddly laced tunic wit green Brandeburg knots. I ordered 24 figures of this unit which fought at Hobkirk’s Hill and Eutaw Springs, two of my battles.

Half my unit is backordered but, these Volunteeers of Ireland will make a nice addition to my American Revolution in the South project.

The OG order was aimed at fleshing out a few of my projects. I need American line infantry and British commanders to wrap up Bladensburg. I ordered French mounted commanders for the Hundred Years War. I also added more Americans to the War With Spain project.

Lots more unpainted figures. Kind of embarrassing. The good news is I continue to paint regularly. I’ll have a painting update on my War of 1812 Brits in the next week. My goal, which I believe is quite achievable, is to have two finished Victrix line battalions, plus my completed 85th light infantry by the first day of school, September 4th.